"AN INSIGHT INTO HEAVY-HANDED HOLLYWOOD PROPAGANDA" 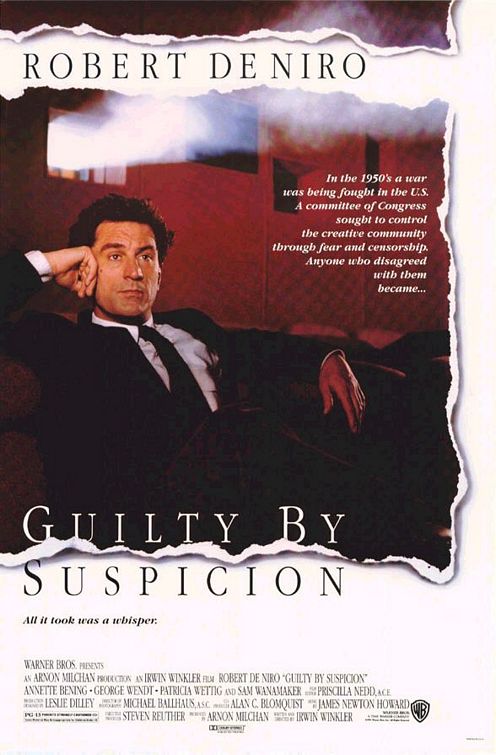 Set in Hollywood during the days of the blacklist, this drama is about the congressional investigation into communism in the film community

“Are you now, or have you ever been, a member of the Communist Party?” is the question resounding time after time, in this drama set during the days of the “Hollywood blacklist”. This question continues to obsess Hollywood nearly 45 years after the first congressional hearings into Communist Party activities in the movie industry.

The story focuses on the life of one man, the fictional David Merrill, whose stellar career as a “golden boy” movie director crashes to a halt in 1951, when he refuses to testify against his friends before the House Un-American Activities Committee (HUAC).

Darryl Zanuck, production head of 20th Century Fox, wants David to make Fox’s next picture, but says the director, who attended a few Party meetings 11 years earlier, must clear his name and record as a communist sympathizer first. David refuses to purge himself by naming the friends and associates who gathered with him at those meetings.

Zanuck pulls David from the picture and suddenly the director falls victim to blacklisting by studio chiefs who once vied for his services. Leaving his ex-wife, Ruth, and young son behind, David tries to find work in New York, but receives the same treatment there.

David returns to Los Angeles to see Ruth, who is concerned about her former spouse’s dilemma. One night, after dinner with Dorothy Nolan, David and Ruth watch in stunned disbelief as the leading actress commits suicide by driving her car off a cliff. She was emotionally distraught because her husband was providing information to the HUAC and gained custody of their son by having a court declare that she was an unfit mother. As friends gather at the funeral the next day, FBI cameras click away.

Then David is hired to shoot a cheap western, but is soon ousted from that job as well. Zanuck calls David in to read a superb script he has waiting for the director. All he has to do is testify before the House committee. For David, though, it’s a no-win situation: Even if he takes the 5th Amendment, he still ends up “guilty by suspicion.”

Finally, David is subpoenaed in February of 1952. Lashing out at the bellowing, gavel-banging HUAC Chairman, David angrily states he will testify only about himself. He winds up with a prison term along with the “Hollywood Ten.” Closing comments add that their vindication did not come about until 1970.

One message of the film is that people should not be considered merely guilty by suspicion, but are innocent until proven guilty. Who could argue with such a simple, straightforward, American principle?

Another message is that people should stand up for what they believe. Again, who could take issue with that?

This message finds its fulfillment in the western David is hired to shoot. The film-within-the-film is supposed to be none other than HIGH NOON. A pointed homage explains director/writer Winkler: “That was a film that was very ’50s, that was very much about the blacklist: a man standing up for what he believes in.”

Of course, Gary Cooper, who starred in HIGH NOON stood up for his country by testifying against the Party members in Hollywood. Furthermore, for distributor Warner Brothers, GUILTY BY SUSPICION is somewhat an atonement since patriotic studio heads Harry and Jack Warner supported the HUAC purge of the Hollywood Reds.

Most of the film’s leftist characters are portrayed as simply too naive, sweet and lovable when, in fact, the Bible teaches that all men are sinners, especially the Hollywood Reds who were committed to subverting biblical American values and the government of the United States. Thus, the picture is something of a whitewash.

After the dust settled, the conservatives were the ones who were blacklisted (and still are): the liberals went back to work. For instance, Adolf Menjou, a highly respected character actor for more than 30 years, never appeared in a motion picture again after he was called upon to express his opinion on the extent of Communist influence in the film industry. Other members of the Screen Actors Guild suffered similar fates for testifying, or speaking openly against Communism. On the other hand, some actors who testified were overlooked, like Gary Cooper, since the greedy eye of the producers was on their box-office drawing power rather than their views on Communism.

The trouble with this film, and so many similar ones, is that Hollywood simplistically distorts the historical period and obscures its most important lessons. The real-life Hollywood 10 had indeed all been card-carrying members of the Communist Party. They were not “guilty by suspicion.” They were caught red-handed, so to speak. Worse yet, all but one refused to dissociate themselves from the Communist Party, which was controlled by the mass-murdering Soviet Leader Josef Stalin, a one-time ally of Adolf Hitler.

Remember, this is during the beginning of the Cold War. Communist Party members Julius and Ethel Rosenburg betrayed their country and provided the Soviet Union with nuclear technology capable of destroying the United States and our way of life. Communism was a real threat, not an imagined one! In fact, recent KGB defections have confirmed that these “American” Communists were traitors, working for the overthrow of our republican government and the subjugation of the United States to the totalitarian rule of Josef Stalin, who murdered over 120 million of his fellow countrymen (mostly Christians).

Even more ironic is the idea that the Hollywood 10 would be used as a backdrop for a morality tale about standing up for one’s beliefs. The Hollywood Communists hardly did that. In fact, if the 10 writers and directors had merely stood up and declared that they were Communist Party members, they could never have been jailed. It was not a crime to be a Communist. Why didn’t they just stand up and defend their beliefs?

The reasons are simple. Their careers would have been over. They knew that the American people understood the evils of Communism and would not patronize films made by totalitarians.

The Communists and their lawyers cooked up a strategy to refuse cooperation with the committee on First Amendment grounds. They all went to jail on contempt of Congress charges. However, the Hollywood 10 were hardly First Amendment heroes. They were defenders of Communism, a belief system responsible for more death, destruction and misery than any other in history.

Films like GUILTY BY SUSPICION are attempting to rewrite history by portraying the villains as heroes. Please don’t be manipulated by this kind of political disinformation.

Unfortunately, in the Hollywood of the 1990s, the good guys are blacklisted. Take the following as a case in point. You are a talented writer, producer, director, or actor. You are religious or politically conservative and don’t mind expressing your views (like objecting to the glaring instances of obscenity and profanity in GUILTY BY SUSPICION, for example). Suddenly you’re out of work and out of fashion. However, not much is being heard from within the entertainment industry about this wave of blacklisting, for one simple reason: fear. Perhaps the issue in GUILTY BY SUSPICION, as one character says, “is not about national security or loyalty, but about power,” meaning who is going to run the country? Ultimately, that is a question that will pit the believer against the unbeliever.

Considering the recent rash of pro-Communist Hollywood films like this and HAVANA where the anti-Communists are the bad guys, at a time when the rest of the world is fed up with the dictatorship of the proletariat, it is clear who dominates the power structure in Hollywood. Now, it is up to Christians to set the record straight by objecting to films like this which poison the wells of history.

If the truth were told, GUILTY BY SUSPICION would be remade and retitled: “Guilty By More Than Suspicion.”