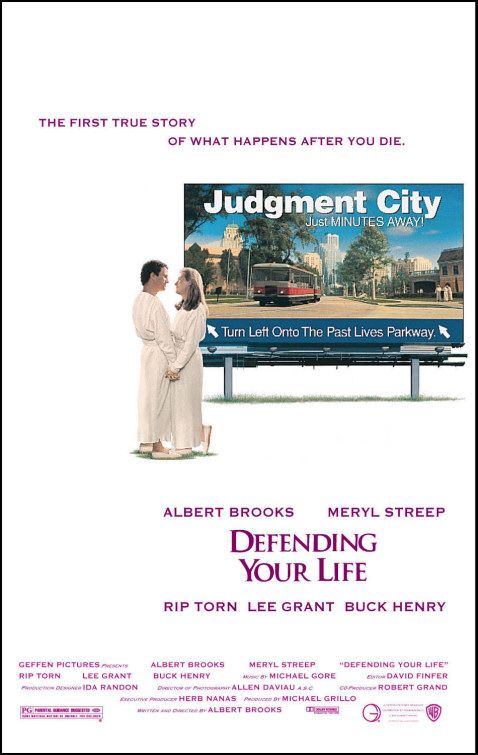 In this comedy, Daniel gets hit by a bus and finds himself headed for Judgment City, where he is greeted by Mr. Diamond, who will be defending Daniel's life. After you die, it is determined whether you become a citizen of the universe, or reincarnate on earth to try again. The goal is to use more of your brain. Mr. Diamond admonishes Daniel for his fear. While on trial, Daniel meets Julia, and they confess their love for each other. Judgment is rendered against Daniel: he is to return to earth. However, he spies Julia bound for advancement and attempts to join her, an act of bravado, which overturns the judgment.

Hopefully, no one will take the hellish ideas in DEFENDING YOUR LIFE seriously. There is no such thing as reincarnation (see Hebrews 9:27). Heaven is not an exercise in self-discipline, but a glorious Kingdom where God's grace abounds in the forgiven perfection of our resurrected bodies. Sin, not fear, is man's biggest problem because it alienates us from God's Love. In fact, Mr. Brooks' works oriented vision of life after death is a nightmare. The Good News is that Jesus Christ stands ready to welcome all who call upon His Name into the Kingdom of God. Please pray that Mr. Brooks will hear and receive the new life which awaits all who allow Jesus Christ to wipe away their sins. Then he won't have to defend his life before the Judge of the Universe for he will have the Counselor who will claim the victory which was won for him on the Cross by Jesus Christ.

Albert Brooks wrote, directed and stars in this grotesque New Age comedy that attempts to explain what happens to you after you die.

Out for a spin in a new car on his birthday, Daniel Miller gets hit by a bus and is killed. Subsequently, he finds himself on a tram headed for Judgment City, a kind of a holding place for the dead (there is no hell), where he is greeted by a man named Mr. Diamond, who will be defending Daniel’s life.

Mr. Diamond explains that after you die an examining period follows your life, where it is determined whether you move forward and become a citizen of the universe, or return to earth reincarnated to try life again. The goal, he discloses, is to get smarter and keep growing, to use more of your brain, which for Daniel is a paltry 3% compared to Mr. Diamond’s 48%.

Mr. Diamond admonishes Daniel for living a life that was largely devoted to fighting fear. He further informs Daniel that if “little brains” still can’t overcome their fears after being reincarnated 20 times, they are thrown away. “What about children?” Daniel asks. “Children don’t have to defend themselves,” Diamond says. “They automatically advance.” As for teenagers, “they’re too much trouble, so they go elsewhere.”

Mr. Diamond goes up against Ms. Foster, one of Judgment City’s prosecutors working for the betterment of the universe. In a courtroom-like setting, replete with two judges and a video screen, defender and prosecutor look at Daniel’s life. Viewing a childhood incident in which Daniel backs down from a bully, the prosecution maintains that fear is what held Daniel back, but the defense counters that restraint was shown, not fear.

Over the next few days, Mr. Diamond and Ms. Foster continue to examine Daniel’s deeds on-screen, arguing about his feelings and whether they arise out of risk-taking, or simply self-preservation. The funniest moments occur when the prosecution offers a compilation of “misjudgments,” slapstick scenes in which Daniel crashes a snowmobile, falls off a roof, or saws through a workbench.

In between his screenings, Daniel meets Julia, another migrating soul who doesn’t seem to have the problem of fear that he does. Julia and Daniel visit the Past Lives Pavilion to view their past lives, which is emceed by Shirley MacLaine. They confess their love for each other, but he refrains from pushing for sex. Unfortunately for Daniel, Ms. Foster plays this very scene on the screen in court the next day, as another example of fear, while Mr. Diamond interprets it as merely thoughtfulness.

Judgment, nonetheless, is rendered against Daniel: he is to return to earth for reincarnation. However, on the tram out of Judgment City, he spies Julia on a tram bound for universe-advancement, and makes a desperate, courageous attempt to join her, an act of fearless bravado, which overturns the courtroom judgment.

Hopefully, no one will take the hellish ideas expressed in DEFENDING YOUR LIFE seriously. Even though the film is intended as comedy, it still should be recognized as contrary to the word of God and leading straight to hell.

For instance, there is no such thing as reincarnation. Hebrews 9:27 says, “It is appointed unto man once to die, but after this the judgment.” Furthermore, this judgment will be before a great white throne on which God Almighty sits, not some cosmic court of the universe. Christians can thank God that their judgment has already fallen upon Jesus Christ, who died for our sins on the Cross and through whom we have new life. Yet, there is no mention of Him in this fallacious film.

Instead, Albert Brooks has constructed a way of dealing with life and death that is grotesque in its eternal implications. Heaven is not an exercise in yogic self-discipline, but a glorious Kingdom where God’s grace abounds in the forgiven and beloved perfection of our resurrected bodies. Although “no eye has seen, no ear has heard, no mind has conceived what God has prepared for those who love him” (1 Corinthians 1:9), we have tangible evidence of the Kingdom for the Church has seen the first-fruits of the Resurrection in Christ Jesus, our Lord and Savior.

Sin, not fear, is man’s biggest problem because it alienates us from God and His Love. Furthermore, Mr. Brooks misses the mark when he indicates we should just follow what is in our hearts for “The heart is deceitful above all things and beyond cure. Who can understand it?” says Jeremiah 17: 9.

Mr. Brooks’ works oriented vision of life after death is a nightmare. Reincarnated beings who can’t remember the rules are required to pass tests they don’t know they’re taking. Then, if you pass these hurdles you ascend to a realm where people are divided into castes depending on their mental attributes. This elitist vision may appeal to stars whose egos have been overinflated by the misplaced adulation of millions of fickled fans, but such solipsism denotes an immature cognitive development and a demonic vision of a hellish eternity which will revolt any thinking person.

The Good News is that Jesus Christ stands ready to welcome all who call upon His precious Name into the glorious Kingdom of God. Please pray that Mr. Brooks will hear and receive the new life which awaits all who allow Jesus Christ to wipe away their sins. Then he won’t have to defend his life before the Judge of the Universe for he will have the Counselor who will claim the victory which was won for him on the Cross by Jesus Christ.