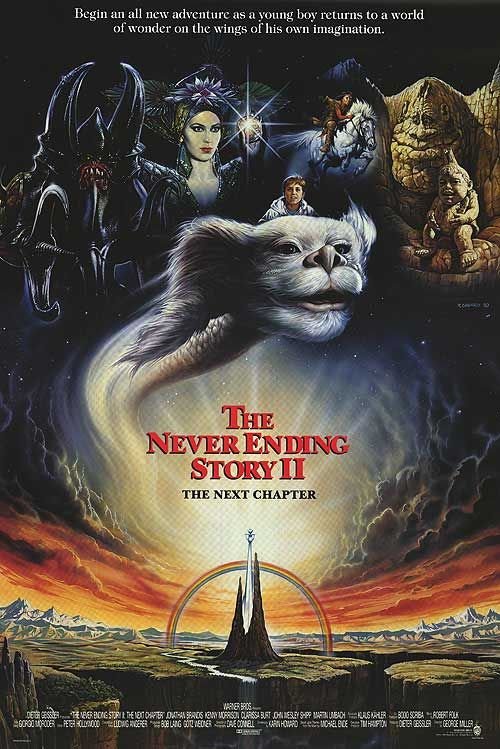 In THE NEVERENDING STORY: THE NEXT CHAPTER, the hero is motherless Bastian Bux, who has been disgraced at school for lacking courage. Bastian looks in an antique store for book on courage. Picking up THE NEVERENDING STORY, he hears voices whisper "Bastian! Help us!" At home, Bastian falls into one of the illustrations and soon is gliding through Fantasia. Unaware that he is Fantasia's last hope in the struggle against the sorceress Xayide, Bastian must rescue the imprisoned Empress. The movie features joyous reunions with his lovable cohorts from the original. Not so much a next chapter as a revised version of the first, the theme is that tales of the imagination are vital to avoid catastrophe. Only when Bastian sacrifices his childhood can he take the plunge back into reality.

The movie has fabulous animatronics and exotic sets. There are humorous overtones, allegorical items of interest, a suspenseful battle between good and evil, and only the mildest touch of violence. However, it may be too intense for little ones. Also, there are hints of New Age nominalism in the film. However, this can be a great opening to explain the Good News of Jesus Christ to children, so discussion is advised.

(V, O, P) Nominalism and some New Ageism within the framework of fictional fantasy. Some depictions of monsters may be too intense for little ones.

THE NEVERENDING STORY: THE NEXT CHAPTER is the sequel to the 1984 original and offers a thrilling tale for youngsters who like to pretend, while reinforcing their budding interest in books.

The hero is motherless schoolboy Bastian Balthazar Bux, who, neglected by his father, has been disgraced at school for lacking the courage to jump off the high-diving board. Bastian goes to an antique book store to look for a “how to” book on the subject of pursuing courage. He picks up a copy of THE NEVERENDING STORY and hears tiny voices whisper “Bastian! Help us!”

Bastian falls into one of the book’s illustrations when he takes it home for study. Soon, he is gliding through the glittering waters of Fantasia as he approaches Silver City, the capital, accompanied by Orin, the coiled serpent embossed on the book’s cover.

Bastian, unaware that he is Fantasia’s last hope in the struggle against the sorceress Xayide, is on a rescue mission to free the Childlike Empress imprisoned by the wicked queen. Xayide has been expecting Bastian and has a plan to render him powerless. Since one of Bastian’s memories is lost every time he uses Orin to make a wish, she sends Nimbly the Bird to trick him into using up his wishes.

Finding the Silver City under siege from Xayide’s robotic giants, the boy learns that Fantasia and the Childlike Empress are weakened by the dwindling supply of dreams and stories from his world that keeps them alive. He appeals to the Fantasians for support, and the movie features some joyous reunions with his lovable cohorts from the original: the flying dog-dragon Falkor; the soft-spoken Indian boy Atreyu; and, a talking mountain named Rockbiter.

Not so much a next chapter as a revised version of the first, the theme again is that tales of the imagination are vital to avoid catastrophe (ie: we’ll destroy ourselves if we can’t foresee the consequences of our actions). Bastian falls into this alternate world much as Alice fell into her wonderland, in order to test his upbringing against the dispassionate severities of adulthood.

Only when Bastian at last sacrifices his childhood (his final two wishes erase all recollection of his mother and father) can he take the plunge back into reality where his father remains unobliterated. The instrument of his wish fulfillment, Orin, turns out to have been nothing but the reflection of his own capabilities all along.

The movie is a wonderful treat for fantasy lovers of fabulous animatronics and exotic sets. There are humorous overtones, allegorical items of interest, a suspenseful battle between good and evil, and only the mildest touch of violence (no language, or sexual misconduct problems whatsoever).

A few words of caution are in order. First, Xayide is guarded by very ugly, scorpion-like giants–too intense for little ones. Second, a key scene hints at New Age philosophy in that Bastian’s dying mother reassures her grieving son, “We’re all part of a never ending story–even if we die.” Such themes are also present in some of the symbols in the film.

Furthermore, there is the potential problem of ontological nominalism (the metaphysical notion that reality is merely a giant thought and that thoughts are things) inherent in most fantasies. Nominalism is conducive to magical thinking. From the perspective of the Bible, we live in a real world with real people, real problems and a real Savior, Jesus Christ, the sovereign Lord and Creator of the Universe. Magical thinking is an anathema to God for it denies the true nature of reality and presumes that His creation can be manipulated by us apart from His Will and His Laws (See Deuteronomy 18:10-12).

On the other hand, it must be noted that fantasy, allegory, symbolism, and metaphor are used by God in the Bible. Thus, fantasy can be a tool of communicating Truth. C.S. Lewis, J.R.R. Tolkien and Frank Peretti have demonstrated as much. However, these issues should be discussed with children so that they can develop the discernment to choose the good and reject the bad. In fact, this can be a great opening to explain the Good News of Jesus Christ, so discussion is advised before you take your children to see THE NEVERENDING STORY: THE NEXT CHAPTER.

Audience: Children, 8 year-olds and up