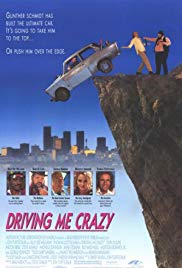 In the movie, DRIVING ME CRAZY, an East German comes to America to sell his "wundercar," only to have it stolen shortly after he arrives. Devoid of most offensive elements, the film contains understated humor, but exhibits exhausting mediocrity all the way

DRIVING ME CRAZY is one of those rather off-beat, somewhat stupid, bottom-of-the barrel comedies that combines under-stated humor and innocence with a fairly decent plot: good triumphs over evil in the end.

The movie begins in the small, provincial town of Englewald, East Germany, where the American McReady Company plans a huge development, although the East German villagers know nothing about it.

Shortly, however, one of the citizens, Gunther Schmidt, decides to leave for America and make his fortune by selling his “wundercar” that utilizes tubers instead of gasoline and can easily do 200 miles per hour. Before long, Gunther winds up in Los Angeles at an automobile show with all the big American auto makers.

Gunther is a complete innocent (perhaps because he was sheltered behind the Berlin Wall), and he is ignorant of American ways, although he has been warned about women and fast-talking people who are out to fleece him. Thus, almost before he parks his amazing car, someone steals it and drives it away. The rest of the movie consists of the search to find his car. Dom DeLuise plays the part of Mr. B., the big honcho heading up the theft of Gunther’s car. In the end, however, justice prevails, and Gunther gets the girl and his car back.

If you want to waste eighty-seven minutes or need to catch up on some rest, go see DRIVING ME CRAZY. The movie is so popular that the reviewer was the only person in the theatre when she saw it. Not only does the film have an underdeveloped plot, but the direction, in the final analysis, doesn’t have much to recommend it, either. The cinematography in East Germany, however, is quite beautiful; unfortunately, most of the movie takes place in L.A.

Gunther’s coming out as well as he did can perhaps be attributed to his innocence all the way through the film, but he was often not wise. While Christians need to maintain their innocence, too, they need to keep Matthew 10:16 in mind as well: “Be ye therefore wise as serpents, and harmless as doves.”

Gunther experienced good fortune, rather than the Lord’s working things out in his life since the movie never mentions the Lord. As Christians, we can trust a loving heavenly Father to help us, however, when we seek to put God first in our lives and live for Him (Matthew 6:33).