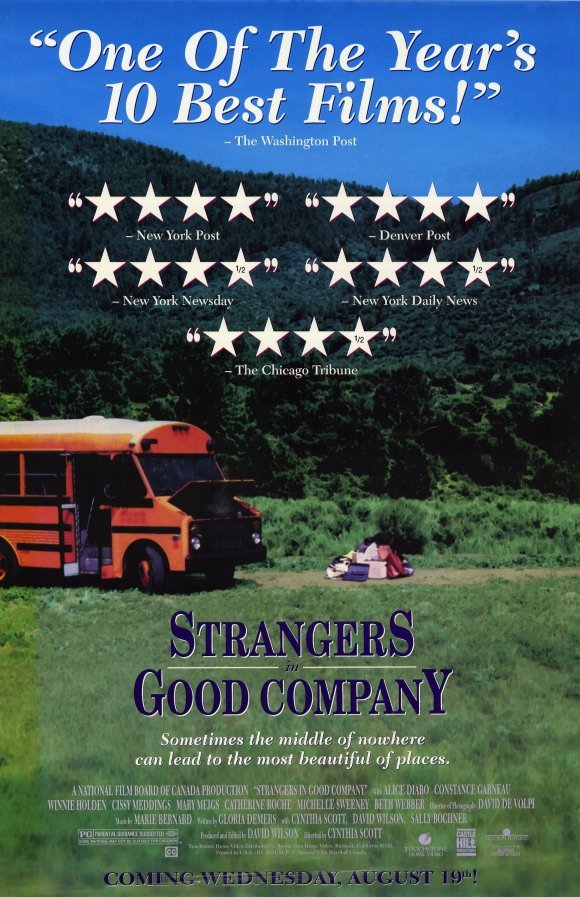 When a broken down bus leaves six grandmas and their chauffeur stranded in the woods, these STRANGERS IN GOOD COMPANY feast on wild berries, pantyhose-caught fish and their past experiences to survive. One of the elderly ladies confesses she is a lesbian: another is a plain-clothes nun who attempts to repair the bus. This gloomy portrait of senior citizens reflects a smorgasbord of diverse interests and backgrounds, but it is simply not that interesting.

When a broken down bus leaves six grandmas and their 30-ish chauffeur stranded in the woods, they find shelter in an abandoned shack. To survive, these STRANGERS IN GOOD COMPANY feast on wild raspberries, frog legs, pantyhose-caught fish, and their past experiences.

What starts out as potentially mysterious and intriguing unfolds into a gloomy portrait of senior citizens. The women’s group is a smorgasbord of diverse interests and backgrounds, but they simply aren’t that interesting.

Livening things up is Catherine, a plain-clothes nun who cheerfully attempts to repair the bus. While the others sit around feeling sorry for themselves, Catherine looks over the owner’s manual and tinkers, while humming J.S. Bach’s “Jezu, Joy of Man.”

Later, Catherine rubs castor oil upon her blistered, arthritic feet and treks several miles into town. In doing this, Catherine puts the needs of the group before her own.

In contrast to Catherine’s sacrificial devotion is Mary, who confesses, “I’m a lesbian. I had a little experiment (with the opposite sex) once, but it didn’t work out.”

Another woman, Cissie, asks “Did it alter your life? You know, going one way to another? Were you ashamed of it?”

“It’s hard not to be when everyone disapproves of it,” replies Mary. She proceeds to talk about her lifelong sodomy cover up, as the ladies “bird watch” from the balcony.

Mary’s homosexuality is viewed matter-of-factly, adding a perverse flavor to this already depressing tale about growing old. The others talk about how “I’m going to die soon” and “time is not on my side anymore.”

This pity-party derails STRANGERS IN GOOD COMPANY, although Catherine does provide a glimmer of hope. She is a subtle reflection of Christ, who “made himself nothing, taking the very nature of a servant. He humbled himself and became obedient to death, even death on a cross” (Phillipians 2:7b & 8b).