AT PLAY IN THE FIELDS OF THE LORD 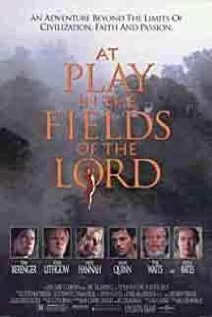 AT PLAY IN THE FIELDS OF THE LORD depicts the conflict between a band of evangelical Christians and a primitive Amazon tribe. All efforts at generating interesting drama are short-circuited by grotesque caricatures of missionaries being mean-spirited, foolish, psychotic, or incompetent. This poorly written film is overtly defamatory and grotesque, coupling sacrilege with extensive nudity and graphic sexual encounters.

AT PLAY IN THE FIELDS OF THE LORD depicts the conflict between a band of evangelical Christians and a primitive Amazon tribe. All efforts at generating interesting drama are short-circuited by grotesque caricatures of missionaries as being mean-spirited, foolish, psychotic, or incompetent. The poorly written film is overtly defamatory, coupling sacrilege with extensive nudity and graphic sexual encounters.

Filmed on location in the remote Amazon, the producers attempt to portray the fictitious Niaruna tribe as realistically as possible. Ex-tribes-people were used in the cast, and were consulted extensively regarding costumes, body paint and rituals. However, no one appears to have spent more than five minutes researching the lives and activities of contemporary missionaries.

The movie opens with the emergency landing of Lewis Moon, a sullen half-Cheyenne pilot, and his buddy, Wolf, in a remote outpost on the Amazon River. There, the local commandant ponders catapulting a few bombs near the Niaruna tribe, in hopes of driving them deeper into the jungle and opening the land for white settlers.

Circling the village, Lewis observes a warrior shaking a spear at the plane. Sensing a spiritual bond with the Niaruna, he decides not to attack. Later, under the influence of a potent local brew, Lewis parachutes into the jungle and joins them.

Meanwhile, a small band of missionaries settle near the Niaruna. Leading them is Leslie Huben, a shrill, relentlessly mean-spirited, shallow, and obnoxious believer. His wife, Andy, is sweet and beautiful. Joining them are newcomers Martin and Hazel Quarrier, and their young son, Billy.

Martin is thoughtful and reasonable, yet is more interested in the observing the local tribes than evangelizing them. His wife, Hazel is emotionally disturbed, sexually repressed and hates everything about the people and the culture she is supposed to evangelize.

In portraying Hazel, Kathy Bates revives the crazed character she won an academy award for in MISERY. Actually, it is inconceivable that any church would allow her to serve punch at a Sunday School picnic, let alone sending her to a primitive and dangerous environment.

Much of the film’s interminable three hours is spent showing Lewis’ absorption into the Niaruna. Little Billy makes friends with the native children and runs naked with them through the jungle. Martin accepts this with odd stoicism but Hazel blows an emotional gasket and becomes overtly psychotic.

Later, a brief illicit kiss between Andy (stark naked after a dip in the river) and Lewis (in his full Niaruna regalia) leads to an outbreak of influenza in the tribe. Before long, half of the Niaruna are dead or dying, with endless scenes of coughing and gasping, so that we are certain to get the point.

Martin is horrified to discover what happened. He becomes even more disillusioned when the Niaruna tribe confuse Jesus with their malevolent god, Kisu.

In a final confrontation, Martin confesses, “I taught them that Jesus was an evil spirit.” In response, Lewis muses, “Jesus, Kisu– what’s the difference? It’s all hocus-pocus anyway.”

This thinly-veiled message is followed with bombs dropping on the village. Martin is clobbered by one of the tribe’s first converts and dies.

In adapting Peter Mathiessen’s 1965 novel, the filmmakers seem to base the missionaries’ garbled dialogue on their impressions of disreputable televangelists. Phrases such as “Praise the Lord” and “The Lord’s will be done” stumble out in ways that make no sense, as if religious people speak in a foreign tongue which the screen writers have barely learned. To make matters worse, Leslie Huben refers to Catholics as “the opposition;” an epithet both peculiar and annoying.

Ultimately, AT PLAY IN THE FIELDS OF THE LORD implies that one’s humanity is inversely proportional to the strength of one’s faith. The agnostic doubters seem appealing, whereas Christians are stick figures, devoid of any genuine emotion, compassion or humor.

The Christian community should boycott AT PLAY IN THE FIELDS OF THE LORD, as it defames missionaries and the Christian faith. An uproar might temporarily increase ticket sales, but will hopefully result in a quick death at the box office.