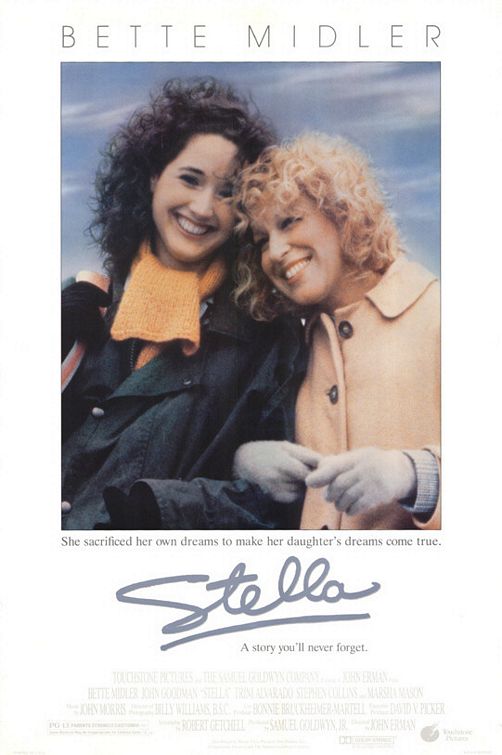 Few profanities, some obscenities, promiscuity, and excessive use of alcohol

A contemporary remake of the 1937 classic tear-jerker STELLA DALLAS with Barbara Stanwyck, the film lacks the flavor, style and acting of the original. Still, the film makers should be commended for making a film about a woman who chooses to keep her baby instead of succumbing to abortion.

Having decided to raise her out-of-wedlock baby girl, Stella Claire continually makes sacrifices for her daughter Laurel’s benefit. She sews Laurel’s sweet sixteen dress by hand and saves pennies earned through door-to-door sales to finance her daughter’s spring break vacation to see her preppie boyfriend in Boca Raton. Although Stella is poor and not well-educated, she has a lot of spunk and tries her best as a single mother to raise her daughter. Stella is played with great relish by Bette Midler. Her appearances range from tacky to frumpy in a story that is full of warmth and the wonderful bonding that occurs between a mother and her daughter who matures into sensitive young womanhood.

The well-to-do father, meanwhile, lives in New York City and invites Laurel for weekend visits. Stella refuses to accept his monetary assistance, preferring to “do it with her own two hands.” When Laurel asks her father why he never married Stella, he replies that he did, but that he and Stella were like oil and water and could not mix. The father sincerely tries to be a good Dad throughout the picture, but he is painted as such a “nice guy” it looks as though the film is saying it’s OK to have a child out of wedlock. In the end, Stella stands in the pouring rain watching her daughter’s wedding, as in the original, now sure her daughter will have the life she sought so hard to give her.

A couple of redeeming themes are presented: Stella desires to give Laurel a warm and wonderful upbringing; their relationship is a real joy to behold; and, Stella epitomizes the self-sacrificing mother, a role diminishing from our career and work-oriented society. Although her behavior is not necessarily exemplary of what a Christian woman should say or do, Stella is indeed “there” for her child. However, there are instances of profanity, obscenity, promiscuous sex, and drunkenness rendering the film unfit for Christian viewing.

Stella would be wise to know that we cannot always gain another’s approval or love by constantly “doing” for them. We can’t always do it by ourselves. We need God’s help through Jesus’ love. When we are crushed and broken He is there to offer us a hand in kindness and mercy. How much sweeter would Stella’s victory be, as she watches her child marry through the rain, if Christ had been there by her side.

Writer: Robert Getchell BASED ON THE NOVEL STELLA DALLAS BY: Olive Higgins Prouty