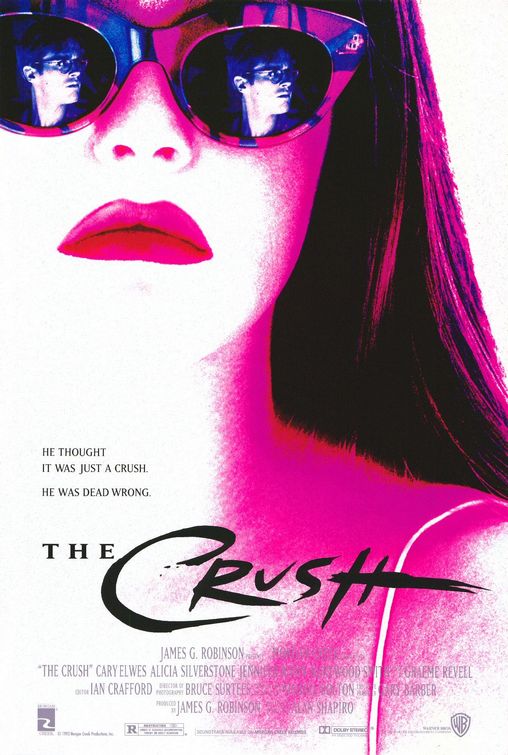 In THE CRUSH, Nick Eliot (Cary Elwes) seems to have it made until he meets the 14-year-old daughter of his landlords and finds out that her crushes can be deadly to the objects of her affection. THE CRUSH maintains a suspenseful pace and Alicia Silverstone as Darian acts out her demonic role in a convincing manner. Regrettably, the subject matter, language and violence leave much to be desired.

(LL, SS, O, VV) Approximately 25 obscenities & 5 profanities; couple of sexual situations (but nothing shown) as couple spends night together; some sexual language; satanic ritual setting with candles in a few scenes, but no acting out of the ritual; and, violence resulting from teenager's romantic crush.

In THE CRUSH, Nick Eliot (Cary Elwes) seems to have it made when he lands a great new job writing for a hot magazine. Not only does he develop an intriguing relationship with Amy, a staff photographer, but he also finds a great place to live: a charming guest house behind the elegant home of Liv and Cliff Forrester. When Nick meets the Forresters’ 14-year-old daughter, Darian (Alicia Silverstone), he is astounded by her beauty, intelligence and precocity. Like most teenagers, Darian is prone to intense romantic crushes. However, unlike those of her peers, Darien’s crushes can be deadly to the objects of her affection; and, Nick soon becomes her latest target. Darian stalks Nick and one night, he discovers a hitherto-unknown-trap door in his guest house. Upon entering, he is astounded to find the setting for a satanic ritual, complete with candles and his picture in the center. After Amy spends the night with Nick, Darian tells her parents Nick abused her so the police take him away for questioning.

THE CRUSH maintains a suspenseful pace as it builds to a climax. Alicia Silverstone as Darian acts out her demonic role in a convincing manner. Cary Elwes, too, turns in a credible acting performance. Unfortunately, Darian’s obsession proves her undoing, and aptly illustrates the biblical truth found in Colossians 3:2: “Set your affection of things above, not on things on the earth.”