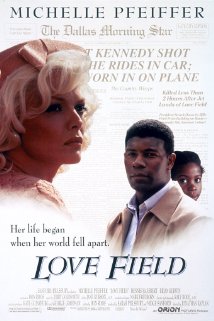 LOVE FIELD depicts a bittersweet friendship between a white woman (Michelle Pfeiffer) and a black man and his daughter during the racially segregated 1960s. Ultimately, LOVE FIELD tackles the difficult subject of racism with empathy and finesse, but fails to build a strong case against injustice.

LOVE FIELD depicts a bittersweet friendship between a white woman and a black man and his daughter during the racially segregated 1960s. The story begins in 1963, with Lurene Hallett (played by Michelle Pfeiffer), as simple-minded beautician. On a bus trip, she befriends Paul Cater, a black man traveling with his 6-year-old daughter, Jonell. Disobeying the bus segregation rules, Lurene sits next to the black man and his daughter and shares personal experiences and family pictures. Later, when Lurene takes Jonell into the women’s restrooms, she discovers blood on the child’s scalp and slash marks on her back. Suspicious, Lurene runs to a phone booth and calls the FBI. Paul explains his side of the story. Jonell is his illegitimate daughter, and he kidnapped her from an abusive State Home, where the child was placed after her mother died. With the police in hot pursuit, the threesome steal a car and head north to Washington, D.C. Along the way, a unique friendship develops.

Ultimately, LOVE FIELD tackles the difficult subject of racism with empathy and finesse, but fails to build a strong case against inequality and injustice. Thus, the movie fails to do what it sets out to accomplish. That is, to testify to the rightness of equal opportunity for all men. With a little editing, a few twists and turns to spice things up and stronger illustrations and resolutions for racism, LOVE FIELD could have been a masterpiece; as it is, few will be moved by it.