"The Sins of the Father" 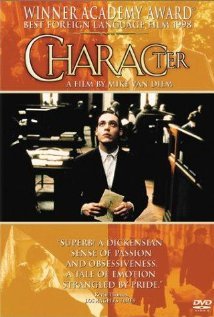 The Academy Award-winning Dutch movie KARAKTER is a deeply brooding, dark psychological movie full of angst and populated by taciturn Dutch characters. The movie opens with young Jacob coming into a large warehouse and confronting Mr. Dreverhaven with the fact that Jacob has just passed his bar exam in spite of everything Dreverhaven has done to destroy his life. Afterwards, when Dreverhaven is found dead, Jacob is arrested and tells the story of his life to the police. Jacob tells how Mr. Dreverhaven shaped his character over the years to drive him to the point of anger and violence.

KARAKTER is incredibly well made. There are profound moments of dialogue, unique insights into human nature, terrific lighting, and wonderful sound. It deserved the Academy Award for best foreign film. However, it is not a movie that offers hope. There are moments that indicate life is predestined. It is interesting that there is no foul language used in this movie until the very end, and, although there are some violent themes, they are not the porno-violence of Hollywood but rather naturalistic. KARAKTER is a movie that deserves to be seen. Regrettably, it never presents the Answer to the problem of sin.

The Academy Award-winning Dutch movie KARAKTER recalls some of Ingmar Bergman’s early work. It is a brooding, dark, psychological movie full of angst and populated by taciturn characters. Although it dismisses God, it portrays the type of humanism that can only arise in a country steeped in reformation theology, and so it clearly illustrates that the wages of sin are death and the sins of the father are vested on the children.

KARAKTER opens with young Jacob coming into a large warehouse and confronting Mr. Dreverhaven with the fact that he has just passed his bar exam in spite of everything Dreverhaven has done to destroy his life. Jacob says this while driving a knife deeply into Dreverhaven’s desk. Calmly, Dreverhaven congratulates Jacob, and Jacob responds by condemning Dreverhaven for working against him. Dreverhaven replies that in fact he worked for Jacob. Jacob leaves the building in anger and then rushes back inside to attack Dreverhaven. The audience doesn’t see the attack, but does see Jacob leaving the building covered in blood.

The next day the police break into Jacob’s apartment and arrest him for the murder of Dreverhaven. In the jail, in response to the intense questioning of his interrogators, Jacob tells the story of his life.

Jacob notes that Dreverhaven was a bailiff who repossessed property for the courts. A tough and stern taciturn man, who sits for hours saying nothing, Dreverhaven appeared to have no fears.

In the flashback, Dreverhaven hires a housekeeper, nicknamed Joba Katadreuffe, and one night rapes her (off-screen). After several weeks of silence, Joba tells Dreverhaven that she is pregnant and leaves his employ. Dreverhaven tracks her down and sends a letter offering to marry her. She rejects his offer which he continues to make week after week for over a year.

When little Jacob is born, Dreverhaven casts a long shadow over his life and Joba seems to reject him. As a doctor later says, “His mother seemed to fight not to have him.” Joba rarely talks to Jacob. At one point, when Jacob is being attacked by his classmates for being a bastard, little Jacob explodes with such fury that he almost kills a boy and so his mother moves to the other side of town. In his new home, Jacob reads a set of Encyclopedia Britannicas and teaches himself English. As he grows up, Jacob realizes his mother does not want him there. She even leases Jacob’s room to a border named Jan Mann.

Jacob tries many jobs but times are tough in 1920s Holland. Social unrest is everywhere. The Communists are rioting. At the same time, Dreverhaven is foreclosing mortgages, evicting people and seizing their property. Jacob decides to buy a cigar store but is swindled out of everything. Unwittingly, he borrows 900 guilders from Dreverhaven’s bank to buy the store. Dreverhaven decides to foreclose his loan to Jacob.

When Jacob goes to the law firm to find out about the foreclosure, one of the young lawyers takes an interest in him. Jacob decides to apply for a job in the law firm and is hired because of his command of the English language. At each success, however, it seems that Dreverhaven is frustrating Jacob. What Jacob does not see, however, is that Dreverhaven is trying to help Jacob build his character.

Eventually, the movie comes back to the scene where Jacob attacks Dreverhaven. The audience sees the entire fight this time, and it is vicious. Jacob doesn’t kill Dreverhaven, but ….

The movie KARAKTER is incredibly well made. There are profound moments of dialogue, unique insights into human nature, terrific lighting, and wonderful sound. It truly deserved the Academy Award for Best Foreign Film. However, this is not a movie that offers hope. There are moments that indicate life is predestined in ways that cannot be changed. Jacob persists in making the wrong choices and misinterpreting the people around him, even as he succeeds. Truly, Jacob is his father’s son, and his character has been shaped by the illegitimacy of his birth.

It is interesting that there is no foul language used in this movie until the very end. Near the end, Jacob’s mother says that he has talent given by God, and he responds by saying that God was never part of their home. There is no foul language in the movie until the final resolution when Jacob’s Communist friend utters two profanities. Thus, this movie charts a downward spiral into purgatory and hell. Jacob comes to realize that success and wealth are worthless, a fact that Dreverhaven realizes way before him. Regrettably, the hope of Jesus Christ is never made clear.

It should be noted that although there are some violent themes they are not the porno-violence of Hollywood, but rather very naturalistic. There is one dream scene of Dreverhaven being attacked by an angry mob when he is naked, but this scene is not salacious, just a naturalistic view of a man exposed for whom he is. KARAKTER is a movie that deserves to be seen. Regrettably, it will not be remembered as a great movie, because it never presents the Answer to the problem of sin.