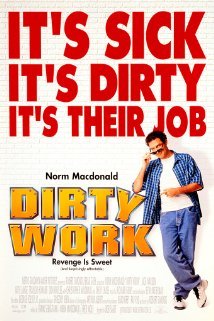 Instead of taking the high road, DIRTY WORK reaches for the lowest common denominator as it features two losers who start a revenge-for-hire business. This lame comedy is filled with foul language, vulgar comments and crude sexual references, including two unnecessary depictions of animal sex.

SATURDAY NIGHT LIVE alumnus Norm Macdonald, who was fired for making jokes about the Kennedy family, is the latest person trying to cash in on the wave of youth comedies inspired by the success of the late John Belushi’s ANIMAL HOUSE twenty years ago. These comedies seem to have increased the level of crudity over the years, as witnessed by Chris Farley’s latest movie, ALMOST HEROES. Macdonald, whose talent for comedy is closer to the mold of Bill Murray than that of Belushi and Farley, adopts this trend in his first starring vehicle, DIRTY WORK.

At the core of DIRTY WORK lies what could have been a clever gimmick: A loser named Mitch, played by Macdonald, decides that the only way he and his loser-friend Sam, played by Artie Lange, can make money is by starting a revenge-for-hire business. Despite the immorality of such a business, one could think of many fairly clean, humorous situations that such businessmen might encounter. Quirky, multidimensional characters could add wonders to such a mix.

Instead of taking the high road, DIRTY WORK reaches for the lowest common denominator. Filled with foul language, vulgar comments and crude sexual references, including two unnecessary depictions of animal sex, DIRTY WORK adds a subplot where Sam’s sex-crazed father turns out to be Mitch’s biological father as well. This allows the superficial characters in DIRTY WORK to make more crude references about the past adultery with Mitch’s late mother and about Mitch having slept with Sam’s sister.

Sam’s father forces Mitch to keep quiet about their real relationship. Meanwhile, an evil real estate developer hires Mitch and Sam to trash the apartment complex of the grandmother of a girl Mitch likes. Mitch and Sam find out, and launch their own plot of revenge against the developer using some homeless men, some prostitutes and some skunks.

DIRTY WORK has a few funnier moments than the aforementioned ALMOST HEROES. Norm Macdonald has some possibilities as a comic actor, if he would take some acting lessons and learn what other movie comedians have done to be successful. Judging from DIRTY WORK and his past efforts, however, he probably lacks the wit and zaniness of current stars like Bill Murray or Steve Martin. He certainly lacks the flair for physical comedy that stars like John Belushi, or Harpo Marx, Chaplin, Lucille Ball, Harold Lloyd, Buster Keaton, Peter Sellers, Jacques Tati, and Jerry Lewis for that matter, brought to the silver screen.

Successful screen comedy requires an intelligent eye and ear for comedy that builds to a crescendo of laughter. Apparently, this is much too difficult for all but a few current stars. It certainly seems extremely difficult for Macdonald in DIRTY WORK, who relies on weak one-liners and brief, stupid sight gags. As a famous actor once remarked on his deathbed, “Dying is easy; comedy is hard.”