FOR RICHER OR POORER 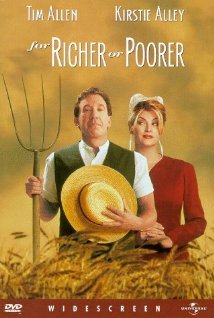 Combining slapstick violence, a big helping of WITNESS and some biblical morality, FOR RICHER OR POORER is the latest Tim Allen silver screen comedy. Brad and Caroline Sexton (played by Tim Allen and Kirstie Alley) have wealth and power, but their marriage is troubled. When their accountant lies about their finances, the IRS comes after Brad and Caroline. Fleeing the IRS, they stumble into an Amish community. Thery decided to pose as an Amish couple until they can solve their problems. As they live with the Amish, they learn the true meaning of life and struggle with their feelings toward each other.

FOR RICHER OR POORER has plenty of farm-life slapstick comedy. The humor never makes fun of the Amish, just the Sexton’s response to them. The movie is well-executed. The biblical worldview is evident in prayer, forgiveness, marital reconciliation, reaping-what-you-sow, repentance, willingness to pay the consequences for one’s actions, and self-sacrifice. The movie is marred by an excessive foul language, but is mainly for comic response. Therefore, this is not a light comedy for the whole family, but it is a redemptive message about the importance of marriage. Based on the success of previous Allen comedies, FOR RICHER OR POORER may do well at the box office

Combining slapstick violence, a big helping of WITNESS and some biblical morality, FOR RICHER OR POORER is the latest Tim Allen silver screen comedy. Catchy music and excellent photography define the opulence and extravagance of Brad (Tim Allen) and Caroline (Kirstie Alley) Sexton. They are the envy of their friends and business associates, and they know how to work a party. In showcasing their latest development project – a Holy Land theme park, they meet with disaster and succeed in alienating the local judge who decides that they are worthy of God’s judgment. Their evening ends in marital discord and bickering, and they decide to seek a divorce, only to wake to a new day full of more woes.

Their accountant, Bob Lachman (played by Wayne Knight, who is Neuman on Seinfeld), has been less than honest which has brought the IRS down on Brad and Caroline. At first, Brad doesn’t know that there is a problem because he is wrapped up in buying the latest gadget or toy.

Brad tries to getaway from the IRS agents, and they give chase. Agents Frank Hall and Derek Lester are an odd couple: one stable; the other a little loony. Derek tries to shoot Brad and blows a satellite mobile phone out of Brad’s hand. Brad jumps into a cab and orders the driver to go, but there is no driver so he steals the cab. The agents continue to pursue along with the local police. As Brad stops for a red light, Caroline gets into the cab not knowing Brad is the driver and learns about their predicament for the first time.

Fleeing the law, they end up crashing the cab into a rural pond and stumble into an Amish community. Brad suggests that they pose as an Amish couple and hide out until he can solve their problems. As they live with the Amish, they learn the real meaning of life and struggle with their feelings toward each other. Life as an Amish couple is totally foreign to their world, as they try to cope in a world that has none of the accouterments of the 20th Century. They hate it at first, but then begin to adjust and even to find the value in hard honest work and having true friends.

This movie has plenty of good farm-life slapstick comedy. The humor never makes fun of the Amish, just the Sexton’s response to them. The movie is fast-paced, and the continuity and flow of the story are well-executed. Allen and Alley do an excellent job of showing their characters awkwardness at wanting to reach out in love toward one another but not wanting to risk rejection by the other. The story even uses a dance as a metaphor for their relationship game. At one point as Brad and Caroline gain a new perspective on life, they say under a star lit sky, “it’s so much clearer out here.”

The biblical worldview of the movie is evident in many ways. The couple struggles with their marriage and how it has been eroded by the years of chasing success. They are forced to face their real feelings for each other and to bend. An Amish couple prays for their marriage. The marriage commitment is asserted as second only to a commitment to God. Brad learns from the harvest that you “reap what you sow” and that the growing of crops are “miracles.” Caroline gives God the credit for providing the rainbow. Brad sacrifices to help Caroline. He also recognizes that his Holy Land them park idea as in poor taste. They exchange their wedding rings again as a private sign of recommitment to their marriage during an Amish wedding where a favorable sermon on marriage commitment is given. While in court for their offenses, they refuse to deny their crime and stand united in wanting to “make it right.” Also, they apologize for misleading the Amish couple. At the start, smoking and drinking are seen as signs of financial success. Near the end, however, these vices represent the old way of life, which the characters do not want to continue.

Regrettably, the movie is marred by an excessive amount of foul language. Some of it is used to show the conflict between Brad and Caroline, but most of it was merely for comic effect. Thus, this is not a light comedy for the whole family. Based on the success of previous Allen comedies, FOR RICHER OR POORER may do well at the box office. It is a good redemptive message on the importance of preserving marriage. On a final note, those who wait to watch the credits will be rewarded.

Watch FOR RICHER OR POORER: