"Can a Leopard Change Its Spots?" 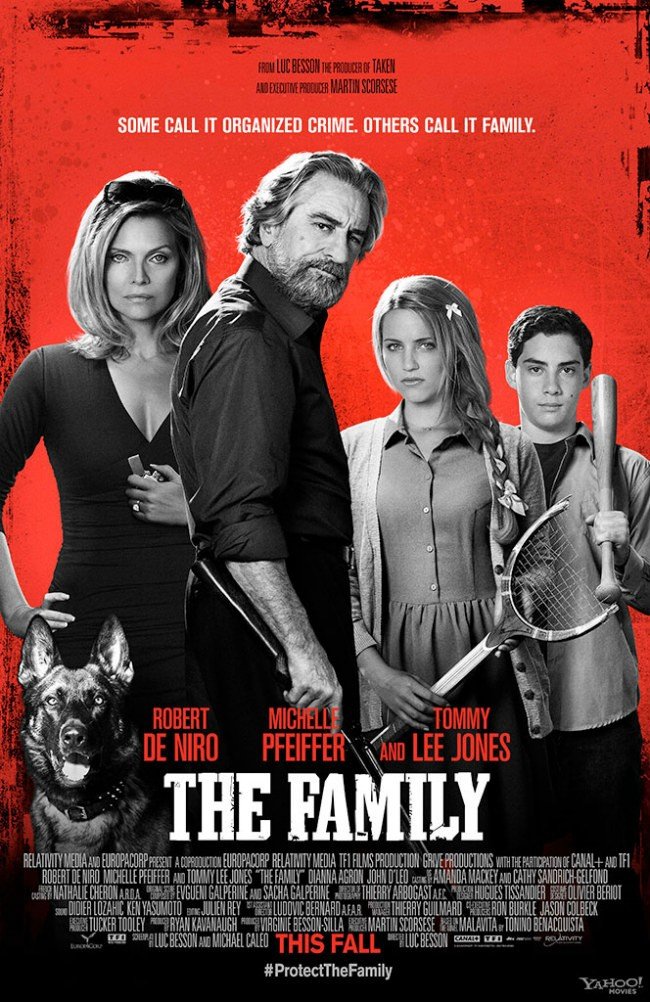 THE FAMILY is a very entertaining comedy thriller about a former mob boss and his family who just can’t seem to control their sinful, criminal, violent urges. Posing as Fred and Maggie Baker, a former mobster and his wife take their two teenage children to a small village in Normandy, France. They are in the FBI’s witness protection program. The problem is, none of the “Bakers,” especially the father and the son, can control their compulsion to use mob tactics when dealing with problems. Eventually, they blow their cover and band together to save themselves from a crew of vicious Mafia hitmen.

THE FAMILY is a very entertaining, funny, suspenseful, and even masterful piece of filmmaking, with a few redeeming qualities. Director Luc Besson and his cast, which includes Robert DeNiro, Michelle Pfeifer, and Tommy Lee Jones, do a really good job. However, despite a sincere prayer to Jesus and some moral elements, THE FAMILY contains lots of strong foul language, some very strong violence, and gratuitous sex. So, THE FAMILY ultimately is too excessive and immoral, though not completely.

(PaPa, C, B, Ro, FR, Ab, LLL, VVV, SS, A, D, MM) Strong pagan, slightly mixed, worldview with some Christian elements (including a seemingly sincere prayer to Jesus), some moral elements, some Romantic elements, and, of course, some pagan elements, plus kindly Catholic priest urges wife of former mob boss to confess, but he didn’t know her past and is so outraged about all the evils and sin in her life and that of her family that he kicks her out of the next church service, so there’s an undercurrent of false religion or works righteousness in his reaction that could be interpreted as Anti-Christian or present him in a somewhat negative light; about 67 obscenities (including many “f” words), three strong profanities, five light profanities; some very strong and lots of strong violence with some blood (some off screen) includes point blank shootings, hitman shoots a whole family to death, hitman shoots another family, hitmen kill all the policemen in a small station in a small French village, innocent bystanders shot to death, children use guns to defend themselves from hitmen, man strangles one hitman, hitmen shoot to death two FBI agents, 17-year-old girl contemplates suicide after being rejected, man buries dead body, a couple bloody corpses, man beats up cheating plumber with baseball bat, image of man’s face all scraped up, woman gets revenge on mean grocery owner by planting small bomb in storage area, teenager boys beat up other teenage boys, teenage girl beats boy with his tennis racket, man imagines putting face of one rude man on barbecue grill, man imagines crunching mayor’s hand in a drawer, and hitmen blow up house and endanger family dog, man hit with speeding car; depicted but clothed sex between 17-year-old high school student and college student, kissing, man flirts with his wife on couch, teenage boys make advances on teenage girl and she reprimands them, telling them to treat girls nice after she pummels one boy with his tennis racket; no nudity; alcohol use; smoking; and, revenge, extortion, high school black market, man in witness protection program rebels against FBI constraints, bending the rules in school, bullying.

THE FAMILY is a very entertaining comedy thriller about a former mob boss and his family who just can’t seem to control their sinful, criminal, violent urges. The movie is very well done by all concerned, including talented French writer and director Luc Besson, but the foul language and immorality are over-the-top, or excessive.

In the story, Robert DeNiro plays former mob boss Giovanni Manzoni. He and his wife, Maggie (Michelle Pfeiffer), and their two teenage children, Belle and Warren (Dianna Agron and John D’Leo), are in the FBI’s witness protection program. However, they always blow their cover because they just can’t seem to resist their old ways of dealing with problems, including stealing, intimidation, violence, and even murder. They’re usually able to cover their tracks, but eventually one of them gets caught, especially Giovanni, who’s sometimes unable to control his temper in public.

The movie opens with the Manzonis posing as the Bakers in a very small French village in Normandy after leaving safe havens in America, Paris and the South of France. Their FBI handler, Robert Stansfield (Tommy Lee Jones), urges Giovanni, aka Fred Baker, to keep a low profile. Better said than done.

Giovanni suddenly decides that he’d like to write his memoirs, just to take stock of his life. Also, when the local plumber can’t seem to help the Bakers get rid of the brown water coming out of their faucet, he decides to take action. Beating up people turns out to be Giovanni’s way of getting rid of a problem.

Meanwhile, his two children also take matters into their own hands when confronted by bullies and French teenagers with raging hormones. Soon, the son is bullying the bullies and helping to run the local high school’s black market in cigarettes and extortion. Also, his wife plants a small bomb in the local grocery when the owners use French to mock her behind her back. They don’t realize that Maggie already knows French.

The son makes a mistake by running a small funny story in the local paper about a joke that two of the mobsters now after his family once told at a family barbecue. One of the mobsters recognizes the story and sends a squad of hitmen to the village.

Will the family’s past finally catch up with them? Or, can they band together and survive the coming violent deluge?

THE FAMILY is a very funny comedy thriller with an exciting, but violent, finish that has its own share of laughs. Its script is very well structured and the performances are mostly delightful. It’s also a loving homage to the gangster movie. In fact, some of the best gangster movies have been comedies, such as John Ford’s THE WHOLE TOWN’S TALKING with the great Edward G. Robinson and Jean Arthur or ROBIN AND THE SEVEN HOODS with the incomparable Frank Sinatra, Dean Martin, Bing Crosby, Sammy Davis, Jr., and Peter Falk.

Sadly, however, THE FAMILY isn’t at all as wholesome as those classics. Thus, there’s lots of strong foul language, some very strong violence, and a gratuitous sex scene where the 17-year-old daughter seduces a young college student working briefly as a teaching assistant and math tutor at the high school. The daughter has decided that she’s in love with the man and wants to marry him, but she’s obviously got the cart before the horse. Later, when the man rebuffs her and says he’s not ready for marriage, she decides to commit suicide until she spies the hitmen coming to kill her family one evening.

The daughter’s fascination with finding the true love of her life is partly Romantic and partly moral. Her seductive behavior, however, is immoral and pagan. The rest of the movie reflects this mixed pagan worldview. This mixture includes a lot of pagan behaviors, some moral behavior, and even some Christian references. For example, at the end, the family must stick together in order to save itself from its own mistakes and the evil men coming to kill them after killing some policemen, a fireman, and a couple neighbors. Also, at one point, the wife and mother sincerely prays to Jesus in a church and asks Jesus to help her family. This brief Christian moment is later undercut when the older, kindly priest kicks her out of a mass after he’s learned in Confession about all her sins.

Ultimately, therefore, while THE FAMILY is a very entertaining, funny, suspenseful, and even masterful piece of filmmaking, with a few redeeming qualities, some of its content is too excessive and immoral. So, THE FAMILY turns out to be unacceptable filmmaking, morally and spiritually.

“Can … a leopard its spots? Neither can you do good who are accustomed to doing evil.”