OUT OF THE FURNACE

"Well Acted But Gritty and Downbeat" 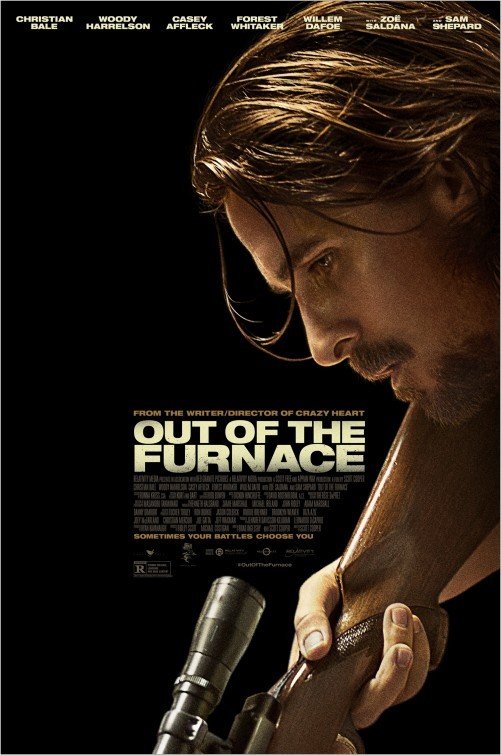 OUT OF THE FURNACE is a schizophrenic dramatic thriller with excellent acting. It’s about two brothers living in the Rust Belt town of Braddock, Pennsylvania. Russell works in the steel mills. His brother, Rodney, is about to serve his fourth tour in Afghanistan. A twist of fate lands Russell in prison for a traffic accident not entirely his fault. When he emerges, he discovers Rodney, discharged from the Army, is involved in illegal street fighting. Mired in debt, Rodney takes a dive for a vicious gangland sociopath in rural New Jersey. When Rodney disappears, Russell infiltrates the area, determined to bring his brother home.

The acting in OUT OF THE FURNACE is tremendous. However, the story starts out as a character drama, then verges into a social drama, and finally turns into a gritty revenge thriller. Thus, it lacks focus, leaving viewers adrift. Finally, the ending is somewhat of a downer. That said, the movie has some solid moral elements. Even so, it contains strong violence, foul language, and drug references. So, MOVIEGUIDE® advises extreme caution for OUT OF THE FURNACE.

OUT OF THE FURNACE doesn’t know whether it wants to be a character drama, a social drama, or a thriller. Consequently, for the first half of the movie, you’re not quite sure where this story is going, though it’s clear who the bad guy is.

The movie opens in 2008 with a vicious sociopath named Harlan at a drive-in hitting his female companion and then brutally beating up a man who tries to defend her. Cut to Russell Baze, and his younger brother, Rodney, in Braddock, Penn. Braddock is a town in the Rust Belt that’s slowly dying economically. Russell works in the remnants of the town’s steel industry. Rodney is a soldier who has one more tour in Afghanistan.

Without his brother’s knowledge, Russell pays off Rodney’s debt to a local bookie, John Petty. The local bookie also runs a tavern, and Russell sees Harlan threaten the bookie. During the meeting with the bookie, the bookie encourages Russell to have a couple whiskeys with him. On the drive home in the dark, Russell accidentally crashes into a mother who suddenly pulls out in front of him. Though he’s not seriously drunk, Russell has enough booze in him to fail the alcohol test, and he’s imprisoned for two years for vehicular manslaughter.

By the time Russell comes out of jail, his black girlfriend has left him for a local black cop. Russell also discovers that his brother, Rodney, has left the Army but has had trouble finding a job. He also learns that, to make ends meet, Rodney is engaging in street fights through the local bookie. Rodney isn’t making much headway, however, because he refuses to earn money by taking a dive, or deliberately losing a fight.

Russell admonishes his brother, telling Rodney it’s no crime to take a manual labor job in the steel mills. Rodney decides to heed his brother’s advice, but he also takes one last fight assignment. This time, however, he forces the bookie to get him a fight gig in the backwoods area in the nearby New Jersey mountains where Harlan and his gang reign supreme. Harlan agrees to set up a fight where Rodney’s supposed to lose, so that Harlan and everyone else can win some big bets.

Once again, however, Rodney’s pride starts to get the better of him, and he almost wins the fight. At the last moment, however, he takes the dive.

Despite this, Harlan isn’t all that pleased. Rodney’s pride and arrogance offends him. So, he ambushes Rodney and the bookie, John, and brutally kills them both.

Russell is extremely upset about his brother’s disappearance. The local policeman, who also happens to be his ex-girlfriend’s new boyfriend, is trying his best to find out what happened, but Harlan’s gang is making the search for Rodney very difficult. There’s also no clear evidence about the murder.

Consequently, with help from his uncle, Russell decides to do his own investigation. This puts him in a life-and-death struggle with Harlan and his vicious rural gang of drug dealers and criminals.

The acting in OUT OF THE FURNACE is tremendous. Even the one lone actress in the movie’s ensemble does a great job. OUT OF THE FURNACE is mostly a guy’s movie, however. As such, there’s a lot of testosterone. Even so, a bigger problem is that the movie starts out as a character drama, then verges into a social drama, and finally turns into a gritty revenge thriller. Thus, the story loses focus at times, and viewers are left adrift. Finally, the ending is somewhat of a downer, and a little bit perplexing.

OUT OF THE FURNACE displays a lot of compassion toward the two brothers in its story. It has great sympathy for their economic plight and that of their town, which has been hard hit by unfair foreign competition and the crony capitalism that encourages it. At the same time, the movie extols family and being your brother’s keeper. The downbeat ending, however, seems to negate some of this. OUT OF THE FURNACE also contains some very strong violence, lots of strong foul language, and some strong drug references that warrant extreme caution. Happily, it doesn’t condone the drug use, but condemns it.

Watch OUT OF THE FURNACE: