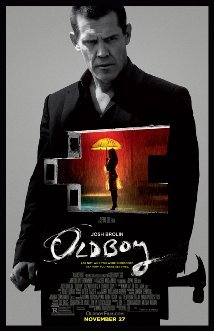 OLDBOY is an American remake of a 2003 Korean thriller. The story follows a hopeless alcoholic named Joe, who’s mysteriously kidnapped in 1993 and held hostage in a sparsely furnished room for the next 20 years. Joe finally escapes and violently dispatches hordes of his jailors. He then appears to stumble across a young social worker named Marie. Marie offers to help Joe find out who his kidnapper was, why he was kidnapped, and why he was released. When he finds the kidnapper, the kidnapper challenges Joe to solve the rest of the mystery behind his kidnapping in 48 hours. If he does, he’ll receive $20 million in diamonds, be reunited safely with his daughter, and his kidnapper will kill himself. If he doesn’t, Joe’s daughter will be killed.

The new OLDBOY is more riveting and better paced than the original, with an excellent score supporting some good performances. However, the movie has plenty of extreme, brutal violence and lewd, graphic content. The second half becomes a repellent, hopeless tale of incest, revenge, murder, and suicide. Ultimately, therefore, OLDBOY is just depressing.

(PaPaPa, B, LLL, VVV, SSS, NN, AAA, D, MMM) Very strong pagan worldview with light moral elements as man overcomes his alcohol problem and tries to make amends when he discovers [SPOILER] he unwittingly had incestuous sex with his own daughter; at least 44 obscenities (including many “f” words) and nine profanities, plus man urinates in the street; very strong, brutal violence includes three over-the-top fight scenes where protagonist uses a hammer and martial arts moves to injure or kill hordes of henchmen out to keep him imprisoned, several men wind up with the hammer lodged in their skull and then pulled out that leaves holes spewing blood, protagonist breaks legs and arms of two men on a football field that confront him, protagonist ties down and tortures one of his captors by cutting slits in his throat and pouring salt on the wounds and is later nearly subjected to the same treatment by that man in revenge, protagonist forced to watch a video of his ex-wife being raped and murdered but graphic violence here not shown to viewers, man saves woman from attempted rape, man shoots himself in the head which causes a bloody mess, man slits throat of a female villain, and a father shoots his wife, daughter, and son before committing suicide himself, all in graphic bloody fashion; extreme sexual content includes incest scene with father and teenage daughter, it’s implied that father is also abusing his son, another incest theme revealed, extended depicted sex scene between older man and young woman, man stops an attempted rape; upper and rear female nudity and upper and rear male nudity; alcohol use, alcohol abuse, drunkenness; brief smoking; and, kidnapping but rebuked, revenge, man framed for murder, lying, deception, hopelessness.

OLDBOY is a remake of a 2003 Korean thriller about an obnoxious alcoholic who’s kidnapped and held hostage for 20 years before being suddenly released and challenged to solve the mystery of his imprisonment. OLDBOY is better made than the original, but still has a shocking series of final twists that make it one of the most morally repellent movies of the year.

The story follows a hopeless alcoholic named Joe, who’s mysteriously kidnapped in 1993 and held hostage in a sparsely furnished room for the next 20 years. Joe finally escapes and violently dispatches hordes of his kidnappers. He then appears to stumble across a young woman named Marie, a social worker with the homeless. Marie offers to help him in his quest to find out who his kidnapper was, why he was kidnapped, and why he was released. If he can solve these questions, he will receive $20 million in diamonds, be reunited safely with his daughter, and his kidnapper will shoot himself to death in front of him, giving him the satisfaction of revenge. If he doesn’t solve the mysteries in 48 hours, however, his daughter will be killed.

Thus begins a quest that’s dark but much more riveting and better paced than the original, with an excellent score backing some good performances, all within a psychological framework that feels like the all-time Hitchcock classic VERTIGO. However, once the awful secret is revealed, the movie becomes extremely repellant, turning into a brutal tale of revenge, suicide, murder, and incest. The protagonist tries to make up for his past evils at the end, but even that is played in an odd way. OLDBOY also contains lots of foul language and extreme lewd content.