A WALK AMONG THE TOMBSTONES

"There Are Better Places to Walk" 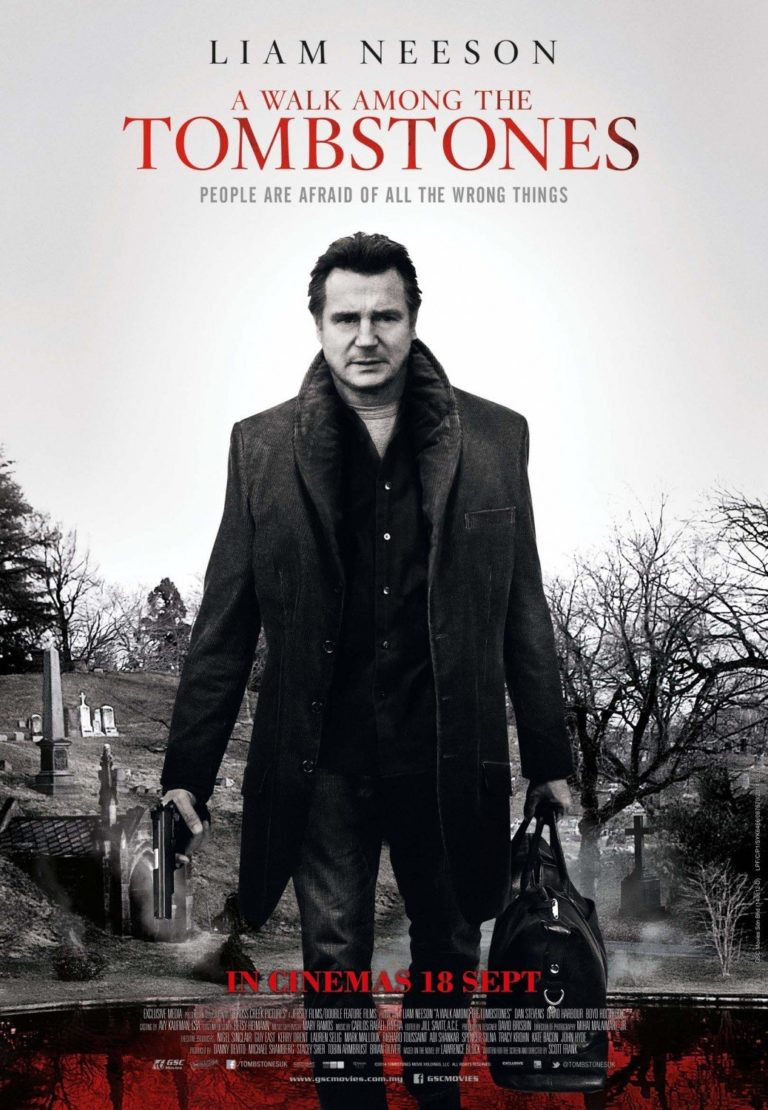 A WALK AMONG THE TOMBSTONES stars Liam Nesson in an effective crime thriller that revels too much in the twisted crimes of its villains. Matt Scudder was a police officer, but after stopping three thugs that results in an innocent life being lost, he quits the police force and stops drinking. Now eight years sober, Matt works as a private detective. A man hires Matt to track down his wife’s kidnappers and murderers. Everything about Matt’s violent past and who he’s become impacts the decisions he makes to stop the evil men.

A WALK AMONG THE TOMBSTONES is thrilling, and Liam Neeson commands the screen. Where the movie fails is its excessive depiction of the sick practices of the villains. The movie has lots of strong foul language. That said, there’s much to like about the movie’s message. Much of the story rides on the hero’s moral conscience and efforts to overcome a past tragedy. This is emphasized through the 12 Step Program of Alcoholics Anonymous, which has both positive and negative elements. Sadly, the positive content in TOMBTONES doesn’t overcome the bad.

(BB, C, Pa, LLL, VVV, SS, NN, AA, DD, MM) Strong moral, biblical worldview with some light Christian elements, main character is a recovering alcoholic using the 12 Step Program, which has become slightly polytheistic but borrows from many Christian principles, and movie extols courage, self-sacrifice, helping those in need (especially children), and fighting evil and includes an AA meeting taking place in a church; more than 50 obscenities (including 30 “f” words), three profanities and multiple sexual references; strong and graphic violence is shown and implied, men are shot point blank in the chest, leg and head with blood splatter, a child who was shot in the eye is seen dead, another young girl loses her fingers to her captors, a man is seen with his legs chopped off, bags of body parts are inside a car trunk, a decapitated head floats in a plastic bad in a pond, man jumps off a building to his death, the impact isn’t seen but his dead body is, even more gruesome is the implied violence, which includes an audio recorder plays sounds of a woman being mutilated, a flashback explicitly implies and the villain describes the horrific acts he’s going to do; strong sexual content includes villainous kidnappers show lewd interest in 13-year-old girl they plan to kidnap, pictures of depicted fornication are briefly seen with some upper female nudity, an opening scene shows many non-explicit shots of a woman's body and eventually it’s revealed she’s tied up and being molested, though that’s not shown graphically; brief upper female nudity in four instances, two in some paintings of a man’s wife, the photographs of depicted fornication and a woman captive whose clothes are torn off; implied alcoholism with only brief drinking shown; a drug addict almost does heroine and a couple uses cocaine from a distance, and multiple characters are involved in drug peddling; and, kidnapping and vengeance, though rebuked, and moral relativism in that main character justifies corruption as a cop.

A WALK AMONG THE TOMBSTONES stars Liam Neeson in an effective crime thriller that revels too much in its own twisted premise.

In 1999 New York City, Matthew Scudder (Liam Neeson) is an unlicensed private detective retired from the police force. Eight years sober, he recalls the day he retired multiple times. It was 1991, and he was off duty at a bar starting the day off with liquor and coffee. When three men storm the bar, rob it and shoot the bartender, Matt is thrown into action. Shooting two of the perpetrators on the street, Matt easily follows the third criminal on the run and shoots him twice in self-defense. As he retells it, that was the last day he drank alcohol.

Matt is approached by Kenny (Dan Stevens of DOWNTON ABBEY), a wealthy drug dealer whose wife was kidnapped the previous day. The kidnappers snatched his wife and agreed to free her for $400,000, but after sending Kenny on a wild goose chase and taking his money, all they gave him was her remains. Now, he wants Matt to find the kidnappers so he can kill them. After some persuasion, Matt agrees.

The killers are just as studious as they are brutal, and they clearly know their victims. Matt, along with a young homeless boy he enlists, finds a commonality between the victims and is able to track down some information on who the kidnappers are. Just when he decides this case isn’t for him, the kidnappers strike again and abduct a young girl. Everything about his violent past and who he’s become impacts the decisions Matt makes to try to get the young girl home alive.

A WALK AMONG THE TOMBSTONES is adapted from a book in a detective series by award-winning mystery author Lawrence Block. So, it’s more of a private eye detective mystery than the typical Liam Neeson shoot-em-up action flick. This allows Neeson to do interesting things with his character. As usual, he commands the viewer’s attention. In likely his biggest transition thus far to the big screen from DOWNTON ABBEY, Dan Stevens is likewise compelling. Overall, the tight writing and ample direction make TOMBSTONES a thrilling ride.

Where the movie ultimately fails is the odd directing choices regarding the fascinations and sick practices of the villains. More than once the cruelty and perversions of the kidnappers is portrayed in a light that’s more quirky than concerning. Though not always graphic, the tidbits that they do give, be it in audio form or verbal description, are still too excessive and graphic for the imagination. Though the subject isn’t and shouldn’t be portrayed as trivial, a finer director could have increased the intensity while lowering the graphic nature of this evil. A WALK AMONG THE TOMBSTONES also contains excessive foul language and other strong lewd content.

That said, there’s a lot to like about the movie’s message. Much of the story rides on Matt Scudder’s reconciling of a past tragedy, and this is emphasized through the 12 Step Program of Alcoholics Anonymous. At one point, the 12 Steps are explicitly read. Though over the years the 12 Steps have become polytheistic, some of the steps heavily borrow from Christian principles, with references to faith, but faith in what God? Also, the hero is an unwavering force for good, even helping a young homeless boy rise above his circumstances. Scudder avoids violence if he can, but isn’t afraid to defend himself and others.

In conclusion, the movie’s positive content can’t overcome the excessive nature of the story and its execution. Many, if not most, media wise viewers will find A WALK AMONG THE TOMBSTONES too much.