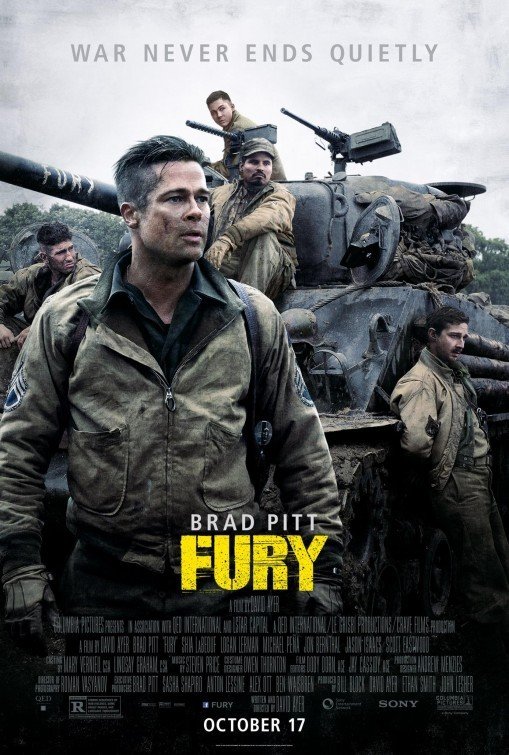 FURY is a riveting World War II action movie. It focuses on a Sherman tank sergeant and his five-man crew making their way into the heart of Hitler’s National Socialist Germany. In April 1945, Sergeant Don Collier leads his tank crew as the Allies make their final push into Hitler’s Germany. The Americans are outnumbered and outgunned by the Germans and their much superior Tiger tanks. When the Americans are caught off guard in a big tank battle, Collier and his men become the only obstacle in the way of hundreds of German soldiers.

More than anything, FURY captures the horrors of war. With terrifyingly real visual effects, the fantastic cast, with Brad Pitt at the lead, give uncomfortably visceral performances of their troubled characters. At the most basic level, FURY is about the reconciliation of ideals and reality. Multiple characters have to learn what it means to fight while also holding onto moral values. The outcome is moving and powerful, but the journey is brutal. Extreme caution is advised for FURY due to some confused theology, strong violence and abundant foul language.

(BBB, CC, PP, FR, LLL, VVV, S, N, AA, D, M) Very strong moral worldview, with some strong Christian and patriotic values, bravery, courage and sacrifice are implored by soldiers, one Christian soldier quotes Scripture several times, mentions God’s grace, says the Lords prayer, reads his Bible and abstains from immoral perversion, but makes theologically confused and confusing false statement when he argues that Hitler may be saved because he may have been baptized, even though he is evil and must be brought to justice (although there is historical evidence that Hitler hated believing Christians as much as he hated Jews); 147 obscenities (including 114 ‘f’ words), 20 strong profanities (mostly GD’s and JC’s), some sexual vulgarities and a man urinates into a can; very strong war violence, soldiers get stabbed in the face, set on fire, shot point blank, executed, limbs are blown straight off by gun fire, tanks roll over bodies, a slice of a mans face is seen on a tank, Nazi’s hang children from ropes, a mans throat is cut, and a soldier jumps on a grenade to save someone; implied sexual content, soldiers philander at a German town with prostitutes, a young man kisses and sleeps with a young women he just met, other soldiers want to sleep with the young women, but their Sergeant won’t let them; upper male nudity; moderate drinking and drunkenness; smoking of cigarettes; many of the soldiers are rough, immoral and cruel, but they ultimately fight for each other and recognize their immorality.

FURY is a riveting World War II action movie that focuses on a Sherman tank Sergeant and his five-man crew making their way into the heart of National Socialist Germany.

Sergeant Don Collier (Brad Pitt), known as Wardaddy to his men has been leading his men in the fight against Germany since they were battling in Africa. Now April 1945, as the Allies make their final push in Germany, Collier is at the front lines. The Americans are outnumbered and outgunned by the Germans and their much superior Tiger tanks. To make things worse, most of the tanks in Collier’s division have been destroyed and the crew lost their experienced gunner and friend.

The crew is comprised of a variety of different men, all pushed to their limits morally, psychologically and physically. Trini Garcia (Michael Peña) is the Mexican-American driver of the tank, Grady Travis (Jon Bernthal) loads the guns with shells and Boyd Swan (Shia LaBeouf), the Christian of the group is the gunner. Back at base Collier is given a new gunner, Norman Ellison (Logan Lerman). Norman, a young typist has no actual military training, certainly no tank training. The rough crew give him the rough truth – kill as many German soldiers as you can and stay alive.

Wardaddy and his men are sent back out into battle almost as soon as they got back, this time to rescue some men. When the morally petrified Norman fails to gun down the enemy, Collier physically forces the young boy to shoot a captured soldier point blank. Shaken by the experience, Norman is faced with the gravity of the situation and the moral depravity that war can push men into doing.

When on a mission to stop a regiment of German soldiers, their tank division is caught off guard suddenly. A German Tiger tank kills everyone except for Collier’s crew. Stranded, the men must decide whether to face the hundreds of Germans alone, or retreat and face and suffer a possible defeat. Can Norman be the soldier that the crew and his country need him to be? Can he be that soldier without compromising his moral values?

More than anything, FURY captures the horrors of war. Director/Writer David Ayer, who showed gritty realism with the LAPD in END OF WATCH captures similar grit in FURY, but on an epic World War II scale. With terrifyingly real visual effects, the fantastic cast with Brad Pitt at the lead give uncomfortably visceral performances of their troubled characters. The tension revolving around the plot and characters never ceases in pace. From beginning to end, this intimate, yet grand scale story forces viewers to experience and hate what war does to people.

At the most basic level, FURY is about the reconciliation of ideals and reality. Norman, a young naive idealist is thrust into a brutal war. He sees that each of the men have been pushed to horrendous extremes. Some of the men have given into their depravity, while others like Boyd have found a way to reconcile their faith with the killing. Multiple times Boyd quotes Scripture in defense of his “righteous war” on the Germans and otherwise, lives morally among the other immoral soldiers. Regrettably, Boyd makes the theologically confused and confusing fallacious statement when he argues that Hitler may be saved because he may have been baptized, even though he is evil and must be brought to justice. Of course, a sacrament is an outward and visible sign of an inner and spiritual grace. So, belief in Jesus Christ is the prerequisite for the salvation that the sacrament signifies. Also, there is overt historical evidence that Hitler hated believing Christians as much as he hated Jews; and clearly, Hitler did not manifest the marks of a Christian, which is the fruit of the Holy Spirit: love, joy, peace, patience, kindness, goodness, faith, gentleness, and self-control.

By the end, the movie finds a balance that is biblical. Ideals are preferred and peaceful, but sadly, to protect liberty, war is sometimes a necessity. A necessity that should never be glorified by way of nationalism, but instead understood as a direct cause of sin. Even though the tragedy of war pushes men to their worst, the characters of FURY, as broken as they are, put their lives on the line for their country and for their brothers in arms.

FURY isn’t a movie for everyone. The violence is gut wrenching, and the language is vulgar and offensive. Thankfully, as rough as FURY is, it evokes emotions regarding war that should be felt and acknowledged. Extreme caution is advised for FURY.