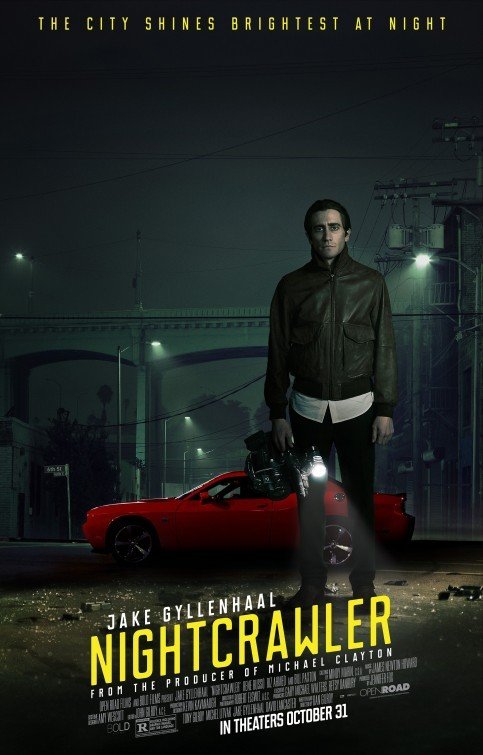 NIGHTCRAWLER is a dark satirical thriller. Jake Gyllenhaal plays Lou, a petty thief, who stumbles on a new career as a TV news videographer, or nightcrawler, of car crashes and crime scenes. At first, Lou competes against a veteran nightcrawler who runs his own service, but Lou quickly learns the ropes and heads down an even darker path. The person paying him is a desperate, aging news producer named Nina who’ll do almost anything for ratings. Soon, Nina and her station become dependent on Lou’s footage, but Lou starts to manipulate crime scenes and people.

NIGHTCRAWLER is superbly directed and acted. It’s also somewhat of a morality tale, a satire of the “If it bleeds, it leads” mentality in television news. That said, the protagonist is clearly an amoral sociopath who constantly scams and blackmails his way to success. The movie has frequent foul language and graphic shots of violent scenes. All in all, NIGHTCRAWLER is an absorbing satire, but it could have used a little more light, morally speaking, to counteract the darkness in its story. So, MOVIEGUIDE® advises extreme caution.

(B, PaPaPa, LLL, VVV, S, A, MMM) Light morality tale in a satire about the TV news mentality of “If it bleeds, it leads,” featuring an immoral protagonist who takes that adage to an extreme but gets away with it; at least 97 obscenities and profanities, including many “f” words; very strong and strong violence includes several graphic crime or car crash scenes, protagonist starts to move bodies at crime scenes and crash scenes so they’ll look better in his camera shots, gunfight between killers and police, and protagonist used to be a thief before he becomes a news videographer and beats up a security guard; man bullies his boss into sleeping with him, but sex implied, not shown; no nudity; alcohol use; no smoking or drugs; and very strong miscellaneous immorality as protagonist lies, deceives, manipulates, blackmails, bullies, and steals for personal gain and TV news boss will almost do anything to get ratings.

NIGHTCRAWLER is a very dark comic satire about a misguided man who stumbles into being a nighttime cameraman or “nightcraweler” for a sleazy TV evening newscast and causes violent consequences when fame and fortune go to his head. Jake Gyllenhaal plays a desperate Los Angeles fringe dweller named Lou Bloom who stumbles into becoming the hottest freelance cameraman (aka “nightcrawler”) in tabloid-style local news. NIGHTCRAWLER pokes fun at the ridiculous lows that our newscasters and their handlers have sunk and serves as a telephoto lens pinpointing the madness that Americans embrace too easily every time they watch a live car chase down the freeway. As such, NIGHTCRAWLER offers a light morality tale of some despicable characters, but contains lots of strong foul language and very strong violence.

The movie opens with Bloom being caught by a guard for cutting a chain-link fence and stealing it in order to sell the metal. He gets the upper hand on the guard and steals his watch, before heading to a shady scrap yard and trying not only to fast-talk his way into better payments but also into a job with the boss. “I’m not gonna hire a thief,” the boss replies.

In this opening scene, viewers get they need to know about Lou, who’s a mysterious sociopath who knows how to talk a mile a minute and flash a toothy smile, but is disconcertingly creepy beneath the surface, like a modern-day Eddie Haskell from “Leave It to Beaver.” After seeing that other nightcrawlers are making $300 and up for literal minutes of footage from bloody car wrecks, Lou steals a fancy bike on Venice Beach and trades it in for a video camera and a police radar scanner before chasing car crashes and shootings across Los Angeles.

At first, Lou competes against a veteran nightcrawler (Bill Paxton) who runs his own service called Mayhem News, but Lou quickly learns the ropes and talks a clueless and overly enthusiastic younger man into being his assistant for $30 a night, even though Lou is starting to make thousands of dollars for his footage. The person paying him is a desperate, aging news producer named Nina (Rene Russo) at KWLA-Channel 6, which seems so blatantly a spoof of Los Angeles station KTLA-Channel 5’s embarrassing local coverage that the fictional channel’s headquarters is even the same building as the real-life KTLA.

Soon, Lou has Nina so desperate for his stunningly graphic footage that he manages to negotiate truly outrageous fees. He also manages to practically take over the station and Nina’s very being. However, when he not only crosses the line at a triple murder scene but storms through it like he’s driving a Sherman tank, no one involved in this rollercoaster ride is ever going to be the same again.

NIGHTCRAWLER is a stunningly well-made movie on an artistic level, but it begins with some troubling immoral themes. Thus, nearly everything Bloom is doing is simply wrong from any logical moral standard, yet the audience is taken along for the ride, as Writer/Director Tony Gilroy wants them to laugh and cheer Bloom on even against their better nature.

At least, that’s how it appears until a harrowing sequence in which Bloom chases a home invasion call and beats the police to the home in question, only to find that two thugs are shooting everyone in the house before speeding away. Once, we see that Bloom will edit and hide the footage to his advantage, and try to engineer a cop-criminal showdown that could put innocent bystanders at risk. Gilroy succeeds brilliantly at making viewers snap out of their mesmerized state and hold even themselves accountable for how far they found themselves in inappropriate admiration towards Lou’s audacious escapades.

There can’t be enough praise lavished on Gyllenhaal here, for he has spent the past decade building a career in which no two movies or roles are remotely alike. His Lou Bloom portrayal is alternately charming, menacing, sly, and hyper-intelligent, in effect a modern-day devil in a cheap suit jacket.

Gilroy cast his real-life wife Rene Russo as the ruthless TV news producer Nina, but she delivers a performance that also hits all types of angles with precision. Watching her coach news anchors to say reprehensible things as they lurch their way through harrowing crime and accident footage, Russo becomes a stone-cold perfect match for Gyllenhaal’s Lou. In fact, her character even finds Lou’s unflinching focus very attractive.

NIGHTCRAWLER has frequent and strong foul language. In addition, there are some graphic shots of car crash and shooting victims. At the end, however, there’s an amazingly thrilling car chase.

That said, the movie’s protagonist is clearly an amoral sociopath who’s constantly scamming and blackmailing his way to success. All in all, NIGHTCRAWLER is an absorbing satire, but it could have used a little more light, morally speaking, to counteract the darkness in its story. So, MOVIEGUIDE® advises extreme caution.