"The Fight for Liberty Reaches a New Level" 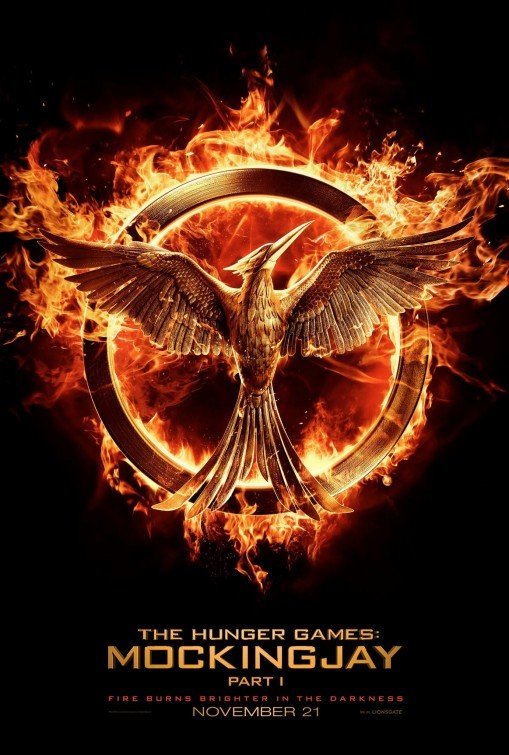 THE HUNGER GAMES: MOCKINGJAY – PART 1 opens with Katniss Everdeen waking up wondering what happened to her friend, Peeta. After sacrificing herself to end the brutal Hunger Games, Katniss has been recovering in the underground District 13. The president of the District and another leader ask Katniss to be the Mockingjay, the leader of the rebellion against the tyrannical government and its evil dictator. After finding out her own district has been destroyed, Katniss decides to take on this role and fight for everyone’s freedom.

THE HUNGER GAMES: MOCKINGJAY – PART 1 is entertaining and suspenseful. Jennifer Lawrence gives another appealing performance as the heroine. The storyline has less action than the first two movies and is more about the heroine’s interest in Peeta, but the filmmakers don’t let this become too sappy. MOCKINGJAY, PART 1 has a strong Christian, redemptive, moral worldview promoting sacrifice and liberty. The heroine shows empathy for those in need and is willing to sacrifice herself for them. She encourages people to fight for their freedom. MOCKINGJAY has some strong action violence, so caution is advised for children.

(CC, BBB, PPP, ACACAC, VV, S, A, M) Strong Christian, redemptive, moral worldview, in a story about fighting for freedom against a tyrannical government led by a dictator, with strong Christian, redemptive values promoting empathy, compassion and sacrifice; no apparent foul language or scatological issues; strong violence includes images of dead bodies, people storming the walls while being shot at and dying, government shoots multiple people in the head with bags over their faces, wounded patients in a hospital, hospital is blown up but seen from a distance, male character tries to strangle main character, and main character goes unconscious, explosions, character mentions he wishes he was dead along with the other tributes instead of enduring what they had to endure; no sexual immorality, but one light kiss, character sleeps next to other character to comfort her, but scene doesn’t imply sex, and character is trying to decide between two love interests; no alcohol but it is mentioned that one character is an alcoholic who can’t stand the prohibition against alcohol and other substances and jokingly asks for some; no smoking or drugs; main character lies about losing a child and another character lies but has been brainwashed.

THE HUNGER GAMES: MOCKINJAY – PART I is the next movie in the Hunger Game series following a young woman trying to save American civilization and fight for freedom. The first part of Mockingjay has some strong moral, redemptive elements of sacrifices and caring for the needy while also emphasizing democracy and freedom, but some of the content does warrant some caution for older pre-teens.

Katniss Everdeen wakes up from an intense dream about the Hunger Games, which the tyrannical government, helped by a corrupt media, use to control the population. When she wakes, she learns she’s in District 13, which she thought had been destroyed, but was saved because the people built an underground compound for themselves. In shock, Katniss can’t recall what has happened to her and is told she was electrocuted when she sacrificed herself to end the brutal hunger games. Immediately she asks where Peeta is, who fought in the games alongside her. Peeta is still in the national capitol, being used by the government for propaganda against Katniss.

At this point, Katniss has a following of people who want to stand up with her and fight against the controlling government. The group is simply called “the rebels.” Katniss is introduced to the president of District 13, Alma Coin. Because of her following among the people, Katniss is asked to become the leader of the rebels, with the title, Mockingjay. Before taking this title, Katniss wants to see the district where she comes from, District 12.

When landing in the district, Katniss sees that District 12 has been completely destroyed by the evil government, led by President Snow. Enraged and saddened, Katniss once again realizes why President Snow must be removed from power. She has decided to help lead the “rebels,” be the Mockingjay, and stand up for liberty and freedom.

THE HUNGER GAMES: MOCKINJAY – PART 1 is done well and entertaining. Jennifer Lawrence once again gives a realistic, appealing performance in this science fiction world. The movie is also suspenseful, though there’s not as much action as the two previous movies. Also, there’s more in this movie about the heroine’s romantic interest in Peeta, but the movie avoids becoming too sappy. Meanwhile, another young man, Gale, is also trying to win her heart.

Part 1 of MOCKINGJAY has a strong Christian, redemptive, moral worldview. The heroine’s character expresses a Christian nature to care for those in need and sacrifice herself for them. The movie shows an evil dictator who kills to get his way. Katniss is a courageous and positive leader and hero who encourages the citizens to rise up and fight for their liberty.

The first two HUNGER GAMES movies have more violence than this movie, but there are still a few shocking, intense scenes, and some children, especially younger ones, might be scared by parts of MOCKINGJAY, PART 1. So, MOVIEGUIDE® advises caution for older children and other sensitive viewers.