THE TRIP TO ITALY

"Comic Banter and Bluster Among the Banquets" 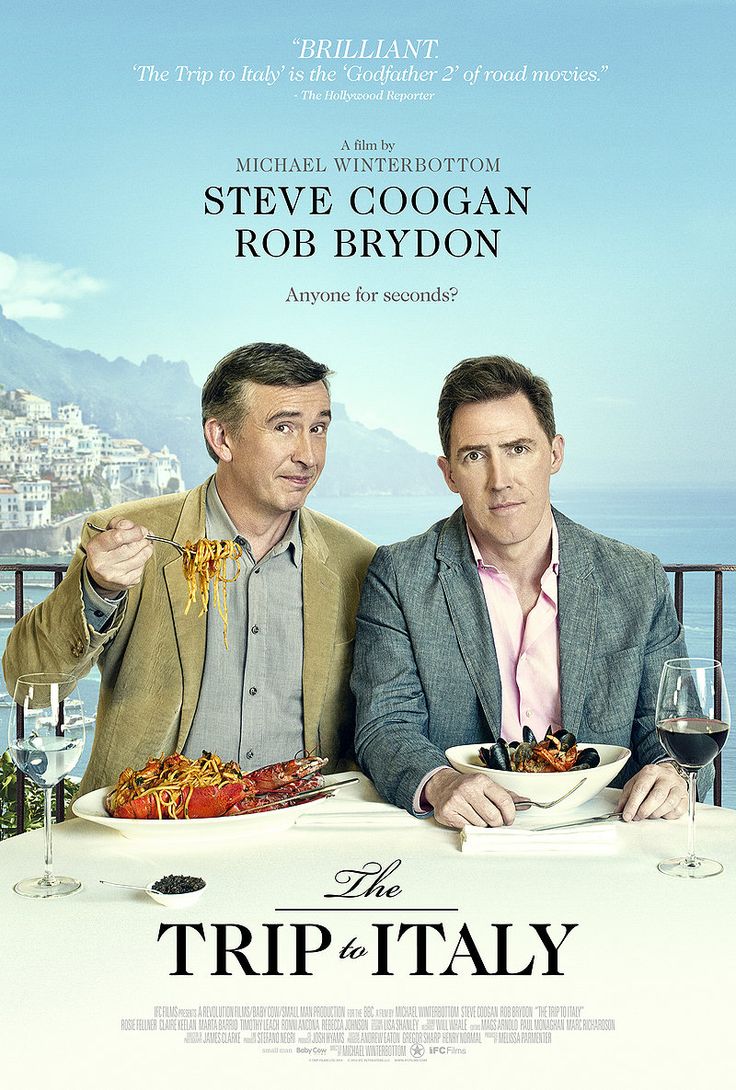 THE TRIP TO ITALY is a sequel to the 2010 arthouse hit THE TRIP and is about two famous British comics sent on a weeklong trip by a magazine to review fine cuisine, this time in Italy. British comedy stars Steve Coogan and Rob Brydon play slightly exaggerated versions of themselves. In both movies, the men are mostly seen driving or eating in restaurants. Both the scenery and the food are sumptuous. The movie intersperses footage of food preparation with funny conversations between the stars. The men enjoy topping each other, but they are caught up in middle-aged angst.

The comic banter in THE TRIP TO ITALY is often hilarious, but it does get a bit tiring toward the end. Also, one of the men is married but decides to cheat on his wife during their trip. The other man, however, tries to improve his relationship with his ex-wife and their college-age son. The movie also suggests that fame and fortune aren’t totally satisfying. So, THE TRIP TO ITALY’s immoral content and foul language are combined with some light moral elements.

(PaPa, B, Ro, LLL, V, S, N, A, MM) Strong, slightly mixed, pagan worldview during restaurant trip through Italy about enjoying life and dealing with family with pagan hedonism mixed in with some moral elements, so there’s pro-family and anti-family content, but there’s also a message that fame and fortune isn’t always satisfying or fulfilling and can be a bed of roses with thorns, plus some talk of admiration about the Romantic poets Lord Byron and Percy Bryce Shelly who also visited Italy; at least 30 obscenities (including 10 or so “f” words), six strong profanities and three or four light profanities; no depicted violence, but some talk/references about death during visits to Pompeii and some catacombs with skulls; immoral attitude toward implied adultery as married man traveling without his wife and young daughter wakes up with a female tour guide and tells his friend he intends to commit adultery with her again before returning home; upper male nudity; frequent casual alcohol use during meals, but not excessive; no smoking or drugs; and, cheating, bickering, sensual pleasures, middle-aged angst.

THE TRIP TO ITALY is a sequel to the 2010 arthouse hit THE TRIP and, like its predecessor based on a BBC television series, it’s about two famous British comics sent on a weeklong trip by a magazine to review fine cuisine, this time in Italy. THE TRIP TO ITALY has a strong mixed pagan worldview with immoral elements offset by some light moral elements. Like its predecessor, there isn’t much plot to this movie.

British comedy stars Steve Coogan and Rob Brydon play slightly exaggerated versions of themselves in THE TRIP TO ITALY, where a magazine sends them on a several-day trip across that country to review the region’s finest restaurants. In both movies, the men are mostly seen driving or eating in restaurants, and both the scenery and the food they consume are sumptuous to behold. Director Michael Winterbottom guides both movies, employing an intriguing conceit where he intersperses documentary-style footage of food preparation with the explosively funny conversations between the stars.

While the men enjoy topping each other comically on their journey, they are – as in the first movie – caught up in middle-aged angst. Brydon has a wife and young daughter waiting for him in England, while Coogan is expressing regret over being a distant father to his son, who’s about to head for college.

By the time the movie’s over, Brydon is shown waking up after an adulterous one-night stand. While he looks like he feels guilty at first, he nonchalantly mentions it to Coogan and, later, to Coogan’s ex-wife. Both look concerned but don’t pass judgment on his infidelity. Meanwhile, Coogan tries to improve his friendship with his ex-wife and to be a better father to his son, so he invites them to meet him along the way and is shown having positive conversations with both.

Ultimately, therefore, THE TRIP TO ITALY has a strong pagan worldview overall, with some light moral elements showing the importance of family and the reconciliation between father and son plus some forgiveness between a man and his ex-wife, though they don’t get back together. Most of the movie, however, is focused on fancy food and funny conversations. Coogan and Brydon are ingenious improvisers who are willing not only to take pointed comic shots at themselves and each other, but also engage in a seemingly unending string of verbal battles trying to outwit each other or top one another’s celebrity impersonations.

Even though the banter is often hilarious, it does get to be a bit tiring toward the end of this nearly two-hour film. Despite this, the filmmakers are smart enough to know that the audience needs a little substance to go with all the frothy funniness. Thus, the movie slows down at wise points in the flow of events for discussions of philosophy, mortality, the gulf that exists between one’s dreams and one’s reality that even exists for famous people whom the world assumes have everything their hearts desire. This is obviously not true, the movie opines. Of course, the only way to a truly satisfying, abundant life is a personal relationship with Jesus Christ.

THE TRIP TO ITALY isn’t the most exciting film of year, nor the funniest. However, it is mostly funny and entertaining, and sometimes touching, despite its strong foul language and nonchalant attitude toward adultery. It has some clean laughs and good scenery as it ambles its way toward a happy conclusion. That said, extreme caution is advised.

Watch THE TRIP TO ITALY: