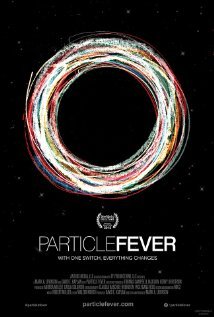 PARTICLE FEVER opens with views of green fields. A deity sits above an iron gate. Beyond the gate is a huge facility where years of scientific research have been ongoing. It is 2007. In an interviewed, scientist Dan Kaplan offers theories about how matter was first created. Over the next few years, a team of physicists, research theorists, experimentalists, and other scientists discuss the beginning of creation based on the Big Bang Theory and the theory of multiple universes. They are trying to discover what subatomic particles were like at the Creation, and searching for the elusive Higgs boson “God” particle.

PARTICLE FEVER is a little dry. As the movie unfolds, the central character becomes the protons, and the story focuses on creation of subatomic particles that the movie’s scientists build their careers, research and lives around trying to find or manipulate. Eventually, PARTICLE FEVER favors the multiple universe theory of the Big Bang. This means there is no Divine Creator or God. So, PARTICLE FEVER becomes an abhorrent, atheist exercise designed to deceive the public and avoid tough questions.

(HHH, Ev, L, M) Very strong humanist worldview as several scientists/physicists discuss the Big Bang Theory of creation, with a reliance on the multiple universes theory that does away with God (the Big Bang Theory does not inherently or necessarily do away with the existence of God), plus evolution is briefly mentioned and discussed but it’s not a big part of the movie directly; three obscenities and one or two profanities; no violence; no sex; no nudity; no alcohol; no smoking or drugs; and, some faulty and fallacious arguments, including special pleading.

PARTICLE FEVER is a humanist documentary that discusses the Big Bang Theory and several developments in physics since the 1930s, focusing mainly on the last decade. It tries to explain the incredible universe we inhabit by doing away with the need for God, so it’s ultimately a false, abhorrent work of fiction.

The movie opens with views of green fields and crops. A deity sits above an iron gate. Beyond the gate is a huge facility where years of scientific research have been ongoing. It is 2007 and scientist Dan Kaplan is being interviewed on theories about how matter was created.

A team of physicists, research theorists, experimentalists, and other scientists discuss the beginning of creation based on the Big Bang Theory. They are trying to discover what particles are like. They discuss the timeline of particle discovery beginning in the 1930s. They work on creating machines with enough speed and force to smash protons together. Essentially, they launch one beam of protons around the ring of a five-story structure in one direction and a second beam of protons in the opposite direction. One physicist shares the notion that random accidents are responsible for creating humankind and our universe. There is also an argument about there being multiple universes rather than just one universe. The many scientists involved in the project around the world strongly believe this ideal of random accidents and proton collisions created the particles that make up man and our world, without God.

Jump to 2010. Scientists in Geneva, Switzerland are making their first attempt at high-energy collisions where they will endeavor to smash together two protons going in opposite directions. The experiment itself has been three years in the making and many scientists have vested much of their intellectual energy as well as their emotional energy into a project they are still not sure will be successful in replicating what they theorized to have happened during the Big Bang. Still with optimism and uncertainty, the researchers launch their experiment and it is a success.

By 2011, researchers are deeply engaged in finding the rare Higgs boson particle, which is believed to be the center of the standard model of how the subatomic particles interacted to create the universe. The Higgs boson or “God” particle is named after Peter Higgs, who first observed this rarely seen subatomic particle in the 1960s. Through years of mathematical equations and research, in 2013 the scientists celebrate that they have indeed found the Higgs boson particle, and they honor Peter Higgs and François Englert with the Nobel Prize for Physics.

PARTICLE FEVER is a little dry. As the movie unfolds, the central character becomes the protons, and story deals with the creation of subatomic particles that all the scientists build their careers, research and lives around trying to find or manipulate. Eventually, PARTICLE FEVER seems to favor the multiple universe theory of the Big Bang. This means God had no part in the creation of the universe, which ends up being eternal under the multiple universes theory.

Of course, the idea of an eternal universe is illogical, and the notion of multiple universes is pure speculation with no basis in scientific fact. Thus, these concepts don’t really make much real sense. So, PARTICLE FEVER ends up being an abhorrent, atheist exercise designed to mislead the public and avoid or ignore tough questions. Media-wise viewers should be wary about being blinded by such theoretical, if not borderline, science.