"Calling for Vigilance in the Modern Church" 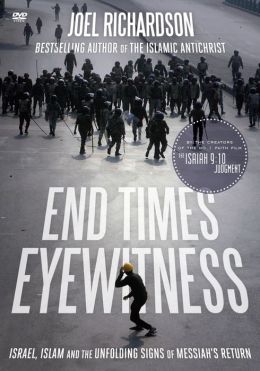 END TIMES EYEWITNESS is a documentary intended to draw attention to the various events happening in the world that seem to be fulfilling the end times prophecies of the Bible. The movie encourages a sense of urgency in the modern church to prepare for the return of Jesus. Using interviews from pastors and religious scholars around the world, it draws parallels between Islamic and biblical prophesies, claiming that the rise of Islam will be what brings forth the Antichrist and the alleged realignment of powers that will eventually make war on Israel.

END TIMES EYEWITNESS uses many one-sided eschatological beliefs while also in-corporating some recent events in the Middle East as an argument in support of the pro-phetic scriptures. Christians may already be familiar with much of the content presented here. However, one must remember that eschatology is a field of ambiguity, and not every Christian in the church will agree with the points made in this movie. All ages can enjoy this documentary, but caution is advised for young children due to the subject mat-ter and images of protest violence.

(CCC, BBB, VV) Told from an exclusively Christian and biblical viewpoint with multiple references to scripture, Bible prophecies, Jesus, promoting Christian values while highlighting Muslim beliefs, Anti-Semitism, Anti-Christian sentiments of primarily Middle Eastern countries, and discusses the rise of Islam all in support of biblical prophesies, but shows all these as unbiblical; violent images of protests and riots around the world that have instances of tear gas, police trying to control the crowd, guns being used to threaten; and, and nothing else objectionable.

END TIMES EYEWITNESS is a documentary designed to draw attention to key events happening around the world that appear to be fulfilling biblical prophesy about the end times. It is concerned with the complacency of the modern church in regards to the Second Coming of Jesus, pointing out that Christ commanded His followers to be aware of the signs of the times.

This 60 Minutes-style presentation uses numerous interviews from pastors and religious scholars as well as video from around the world to support its arguments. However, it doesn’t do much to bring new information or viewpoints to the table. It rehashes decades-old beliefs that have been very prevalent in end-times eschatology, and any Christian who has sat through a pastor’s sermon about the last days is sure to have heard most of it before.

In true documentary form, it only shares one view on how to interpret biblical prophecy, gently reprimanding other Christians or biblical scholars who might disagree. Much of the time is spent on drawing comparisons between Islamic and Biblical prophesies, claiming that the rise of Islam is what will eventually set everything in motion to usher in the “Antichrist” and a one-world religion.

Although it relies on many of the older eschatological viewpoints such as the rebirth of Israel as a nation and the rebuilding of the temple, it does use some more recent events as evidence to support its thesis. The civil war in Egypt, the growing Islamic sentiment in Turkey, and the rise of ISIS are all named as examples of a power struggle in the region surrounding Israel that will one day move against the Jewish state.

While some Christians will find this documentary interesting, not every believer will agree with this movie. Therefore caution should be advised for young children due to the subject matter and some footage of protest violence and civil unrest. For differing views, see LAST DAYS MADNESS by Gary DeMar or read: Wrongly Dividing the Word of Truth by John H. Gerstner and Coming Again: But When? a Fascinating Look at the Beliefs Surrounding Christ’s Return by Jerry Newcombe.