"It’s Never Too Late To Love and Live Life" 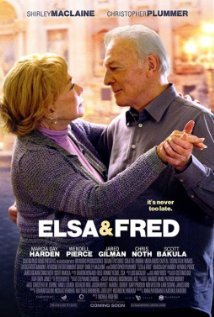 ELSA AND FRED is a light-hearted romantic comedy about the importance of enjoying life when faced with old age and death. Elsa, a spry lady in her mid-70s, must teach this lesson to Fred, a disgruntled and miserable elderly widower who moves into her apartment building. Elsa’s gift of gab and colorful imagination enable her to tell Fred compelling stories that are either exaggerations of the truth or just lies. Fred finds this completely exasperating at first but he eventually begins to accept Elsa as she is. Fred surprises Elsa with a gift fulfilling a deep longing of hers to visit Rome.

ELSA AND FRED is beautifully told with grace and comedy. The elderly couple’s travels to picturesque Rome are nicely captured. The worldview of ELSA AND FRED is strongly moral. Elsa is no angel and is given to lies and other acts of mischief, but she genuinely cares for Fred and helps bring him back to “the land of the living” after his wife’s death. Caution is advised for older children, however, due to brief foul language and some mature themes.

(BB, Ro, FR, L, S, A, D, M) Strong moral worldview as friends and family show love and compassion to widower, widower comes out of his self-pity comfort zone to grant a last request, mitigated by some Romantic, antinomian content; a few obscenities and light toilet humor, no profanity; no violence; fornication is implied between older couple; no nudity; alcohol with meals, social drinks; elderly man has medicine cabinet full of prescription drugs and takes one pill; and, death, woman on dialysis, woman lies and exaggerates often; dysfunctional marriages discussed, and there’s an irresponsible/immature adult son.

ELSA AND FRED is a light-hearted romantic comedy that shows the importance of enjoying life even when faced with senescence and death. Elsa, a spry lady in her mid-70s, must teach this valuable lesson to Fred, a recent widower who moves into her apartment building.

Fred is the classic grumpy old man not happy with anything or anyone it seems. However, beneath his disgruntled exterior is a gentleman who is trying to adjust to changes about which he has little power and autonomy. His daughter believes he needs a caretaker and moves him into a smaller apartment after his wife dies for his own good and hires a home healthcare provider to look after him. He is content to wallow in self-pity and isolate himself in his apartment until Elsa forces him out of hiding.

Elsa is full of life and loves to laugh; everything Fred wants to avoid. On a number of occasions Fred rejects her company due to her inquisitive and foolhardy approach to life. However, as time passes, he realizes how much he begins to actually enjoy life once he lets Elsa into his life.

Throughout ELSA AND FRED, Elsa’s gift of gab and colorful imagination enable her to tell Fred compelling stories that are either exaggerations of the truth or just flat-out lies. In the beginning, Fred finds this completely exasperating, but in time he begins to accept Elsa as she is; especially, once he realizes that she’s on dialysis with possibly not much time to live.

Fred surprises Elsa with a deep longing of hers to travel to Rome and reenact a romantic scene from her favorite Italian movie.

ELSA AND FRED is a story beautifully told with grace and comedy throughout. Elsa stays her same vibrant, passionate self to the end despite her ailment, which she doesn’t disclose to Fred. Fred on the other hand undergoes great character change, and there is a defined character arc as he progresses from a hermit wallowing in self-pity to one of happiness, gratitude, and humility. Their travels to picturesque Rome are nicely captured. Close-up shots and times of intensity profoundly portray the struggles between their personalities as completely polar opposites.

While the movie is fairly family-friendly, caution for older children is warranted for a few obscenities and adult themes. The worldview of ELSA AND FRED is strongly moral. Although Elsa is no angel and is given to lies, bending the truth, leaving restaurants without paying, and other acts of mischief, she genuinely cares for Fred and helps bring him back to “the land of the living” after his wife’s death. Beneath his callous exterior, Fred has a heart that is soft toward Elsa and even his daughter, and he comes to express his love and compassion for them both before the end.

All in all, ELSA AND FRED is a heartwarming story of an older couple that meets later in life encouraging us to make the most of every moment—no matter how many or how few those moments may be.