THE TREE THAT SAVED CHRISTMAS

"Preserving the Past and Saving the Future" 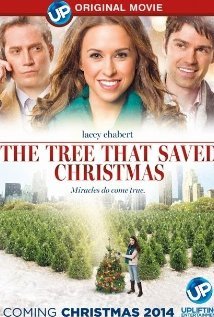 THE TREE THAT SAVED CHRISTMAS is a heart-tugging holiday drama. It’s a woman named Molly who suddenly decides to leave her publishing job in New York to return home and find a way to save her family’s Christmas tree farm from being foreclosed. With her parents behind on their loan payments, the bank refuses to grant them any mercy and plans to build a resort on the property to bring business back into the small Vermont town. Once home, Molly must face the heartache of losing her past and find a way to save her family’s future.

This TV movie is generally well made with a somewhat unique plot and natural acting. The story provides a good number of twists to keep a viewer entertained to the end. It also has plenty of emotional moments that draw audiences into the plight of the characters. The movie sports an overall moral worldview with Christian elements weaved in throughout. There is virtually no objectionable content to keep children away. THE TREE THAT SAVED CHRISTMAS is a great family movie for the holiday season.

(BBB, CC, CapCap, A, M) Very strong moral worldview in a Christmas story about treating people fairly, with strong family values and one mention of the blessings of God, plus a strong emphasis on small business, banking and taking personal financial responsibility; no foul language but one character uses the word “fracking” and another character is called a “snake”; glass of beer and wine consumed over dinner; and, mention of divorced parents, greed but rebuked, character takes out his anger on a family and tries to take away their home and characters throw snowballs at a window in anger (though there’s no intention to break it).

THE TREE THAT SAVED CHRISTMAS is a delightful drama about a girl who returns home to her family’s Christmas tree farm to save it from foreclosure. As a child, Molly conjured all kinds of tales about her family’s trees, telling her father that every tree has a story. Her dream is to one day move to New York City with her best friend, Lucas, where she would write stories, and he would use his photography talents to take pictures.

One morning Molly wakes to the sounds of chain saws and discovers her father is cutting down a special baby tree she had named after herself. She manages to stop him just in time, but he’s already cut into the trunk. They bandage the wound in an effort to save the tree.

Molly’s parents decide they want to expand the farm and take out a loan at the local bank from her friend’s father to do so. Though they decide they are doing what is best, they can’t help but feel weighed down by the financial burden.

Twenty years later, Molly is working at a publishing company in New York as an assistant to a demanding boss, Mr. Dunlap. Although she writes in her spare time, her writing career is headed nowhere. To make matters worse, she receives a call from her brother Ryan just before Christmas informing her that her parents are behind on their loan payments, and Lucas’ father is planning to foreclose on the farm. He has plans to sell it to a development firm where they will clear the land and build a mountain resort. Although Molly wants to return home desperately, her boss tells her she has to work over Christmas.

While coordinating the Christmas decorations for the Dunlap home, Molly is shocked to discover that the Christmas tree delivered is from her family’s farm and is also her special tree that was cut into when she was a child. Certain that her tree found her again for a reason, she risks losing her job and takes off for Vermont with the tree, determined to find a way to save the farm.

This television movie’s plot is unique and there are plenty of twists along the way to sustain interest, though the path of the story becomes somewhat predictable as the end nears. There are many touching moments that are sure to grab at the heartstrings. While the acting is top-notch for the most part, there are times where it seems shallow and contrived. In order to make the story work, the writers jumped a few hurdles too quickly in the last act of the movie, not allowing for a more natural evolution of character and plot development. THE TREE THAT SAVED CHRISTMAS also suffers from the trend of a continuous soundtrack throughout most of the movie, unnecessarily underscoring the mood of the scene in many cases.

All ages will enjoy THE TREE THAT SAVED CHRISTMAS, which contains little to no objection content. Molly’s family seems to be Christians with their attitude towards others and their belief that God has blessed them. The story is a morality play in that good prevails over evil, and the characters all respect a certain standard of decency except for the antagonist, Lucas’ father, who uses his anger over his divorce from his wife to fuel his greed.

Watch THE TREE THAT SAVED CHRISTMAS:

Rating: ** Preserving the Past and Saving the Future**