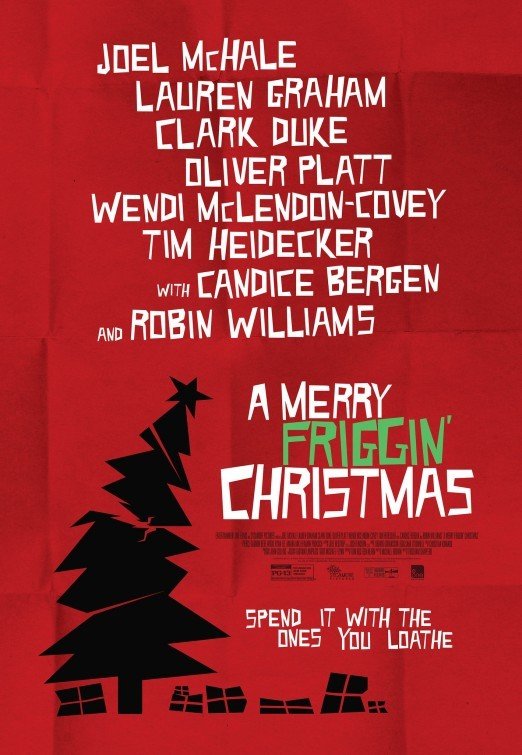 A MERRY FRIGGIN’ CHRISTMAS follows the harried Christmas preparations at the Wisconsin home of Boyd Mitchler’s father, where Boyd has to deal with his cantankerous dad, Mitch, who makes everyone miserable with his drunken rants. Mitch tried to ruin Christmas for Boyd years ago. So, Boyd has always tried to make Christmas perfect and Santa seem real for his own son. However, when Boyd checks the presents under the tree, he realizes none of his son’s presents are there. Instead, they are four hours away at his house in Chicago. So, Boyd, his dad and a neighbor race to make the eight-hour roundtrip and get the presents before Boyd’s son wakes up.

A MERRY FRIGGIN’ CHRISTMAS is a comedy with a modest budget that still manages to have an impressive cast, who give it their all. There are enough funny lines to draw regular chuckles, though some of the humor is mean-spirited and bitter. As the movie picks up pace, it takes on a sweeter tone with a positive resolution. Extreme caution is advised for excessive foul language, insults and other crude content.

(PaPa, Ab, C, B, LLL, V, S, AA, MM) Strong mixed pagan worldview with some Anti-Christmas sentiments, but there’s a brief positive scene in a Christian church during a Christmas hymn, and messages of forgiveness and repentance; at least 39 obscenities and 10 profanities, plus men being chased purposely make a portable toilet splatter feces onto policeman’s windshield; light comically intended violence includes a couple comical fights, chase scene with police, and men in car accidentally run their car into a drunk Santa in the middle of the road, but he survives and leads them home on his snowmobile; no sex scenes but some crude, lewd comments; alcohol use and drunkenness, and man’s father is a recovering alcoholic; no smoking or drugs; and, family bickering and hurting each others’ feelings through insults and holding grudges, and father overcompensates for his father’s Anti-Christmas and Anti-Santa attitude when he was young by making an extra effort with his own son.

A MERRY FRIGGIN’ CHRISTMAS is a Christmas-set comedy that follows a father, his own estranged dad and a strange young male relative as they scramble on Christmas Eve night to find the special Christmas present for the son the father has forgotten at home over four hours away. A MERRY FRIGGIN’ CHRISTMAS has a strong mixed pagan worldview balanced by some positive Christian, moral elements, including messages of repentance and forgiveness.

The movie follows the harried preparations at the Wisconsin home of Boyd Mitchler’s (Joel McHale) father for Christmas, where he has to deal with his cantankerous dad, Mitch (Robin Williams), who makes everyone miserable with his drunken rants. Mitch tried to ruin Christmas for Boyd years ago by making a drunken fool of himself and saying Santa wasn’t real when Boyd was too young to handle that fact. So, Boyd has always tried to make Christmas perfect and Santa seem real for his son.

However, when Boyd checks the presents under the tree, he realizes none of his son’s presents are there. He remembers they are four hours away at his own house in Chicago. So, Boyd, his dad and an odd neighbor named Nelson (Clark Duke) jump in a truck together and race to make the 8-hour roundtrip and get the presents before the son wakes up in the morning.

The men wind up with all sorts of shenanigans including speeding, evading police, knocking open port-a-potties with their reckless driving, and having lots of arguments. During the process, Boyd and his father manage to bond and forgive each other, while the women of the family have their own humorous, drunken talks in Wisconsin.

A MERRY FRIGGIN’ CHRISTMAS is a modestly-budgeted comedy that still manages to pull in an impressive cast, who give it their all. There are enough funny lines to draw regular chuckles, though some of the humor is mean-spirited and told with bitterness. As the movie picks up the pace with its adventures, it also takes on a sweeter tone that’s not too sentimental but takes some early darkness off the edges.

While it doesn’t acknowledge (nor mock) the real reason for the Christmas season and some of the material falls flat, A MERRY FRIGGIN’ CHRISTMAS has enough going for it to make for some amusing, heartwarming viewing. However, extreme caution is advised for the movie’s excessive foul language, insults and other crude content.