"Uplifting Story About the Power of Giving" 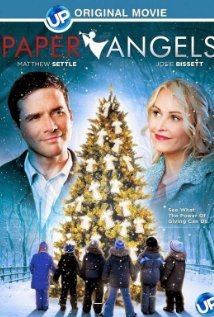 In PAPER ANGELS, a mother and her two children flee from their abusive dad to a new town. Supporting her children alone, Lynn’s unable to afford Christmas gifts and signs them up for The Salvation Army’s Paper Angels program. Her son, Thomas, finds escape from their problems playing basketball at the local community center. He starts playing pickup games with Kevin, a small business owner who is about to lose his business due to the recession. Little do either know that Kevin has chosen Thomas’s name from the Paper Angel tree. Through the spirit of giving, they both touch each other’s lives in a way that can only be explained as a Christmas miracle.

The plot could use better character and story development, but PAPER ANGELS is a heartwarming TV movie that promotes the power of prayer and Christian values. The main characters are godly examples of how to handle problems. Some caution should be exercised for younger children due to the subject of alcoholism, implied abuse and brief minor violence. PAPER ANGELS is a Christian movie the whole family can enjoy.

(CCC, BBB, Ro, V, AA, M) Very strong Christian, moral worldview with multiple references to praying, families attending church, hymns being sung, pastor mentors youth, trying to follow God’s guidance, and The Salvation Army is featured; with some elements regarding the feelings in your heart rather than the Bible; no offensive language; one brief scene with physical bullying, where boy hits another with an elbow to the back of the head; no sexual content; no nudity; short scene with father drinking a beer while watching basketball and father asks son to get beer for him from the kitchen and alcoholism implied; and, cyber bullying, teasing behind the back at school, implied abuse, and mother and children abandon alcoholic father.

PAPER ANGELS is an original movie from UP TV about Lynn and her two children, Thomas and Sara, who move to a new town to escape their alcoholic husband and father, Darryl. As the sole provider for her children, Lynn struggles to make it financially as a waitress, which causes Thomas to be teased at school. She decides to sign her children up for the Salvation Army’s Paper Angels program so they will have gifts for Christmas.

The one escape Thomas has from his problems is basketball, a love that he shared with his dad. Unable to try out for the high school team, he uses the community center to practice, running into the local high school basketball star, Vic West. With his star status being threatened, Vic bullies Thomas both on and off the court. Eventually, this leads to some cyber bullying on Facebook, touting Thomas as a poor charity case in need of donations. The bullying goes viral, which further alienates him from his peers.

Meanwhile, Kevin Morell’s marketing business across town is in danger of going under after they lose their biggest client to the recession. With twins on the way, it couldn’t have come at a worse time for him and his wife. While at the mall, Kevin bumps into his old pastor who also happens to run the community center. The pastor invites Kevin back to play ball with some of the local boys like he used to do, to get his mind off his troubles. Kevin takes him up on the offer and ends up playing regular pickup games with Thomas.

Instead of worrying about his failing business, his wife insists they pick out two kids from the Paper Angels program and give them everything on their Christmas list. Kevin unknowingly chooses Thomas who he’s been playing basketball with at the community center.

Both Kevin and Thomas choose to bless others rather than resent their circumstances, and a Christmas miracle happens that nobody expected.

While the production quality of PAPER ANGELS is very good, there isn’t much happening with the plot. It isn’t until nearing the end of the TV movie that things really start to pick up, and the little twist at the end almost makes up for the earlier problems. The movie would have been helped with more in depth character and story development, allowing viewers the satisfaction of being immersed in the character’s lives rather than feeling like outsiders.

PAPER ANGELS puts high value in its moral and largely Christian worldview, not shying away from the power of prayer or the importance of attending church. However, any mention of God is sometimes reduced to simply a “guiding feeling inside.” There is no foul language, but slight caution would be advised for younger children due to an alcoholic father and broken family. Abuse isn’t shown, but it is implied. There is also a very brief moment when Vic elbows Thomas in the back of the head.

Children will like PAPER ANGELS because the story centers around children, and adults will love the uplifting story that reminds us of the power of giving.

Rating: ** Uplifting Story About the Power of Giving **