LIFE OF A KING 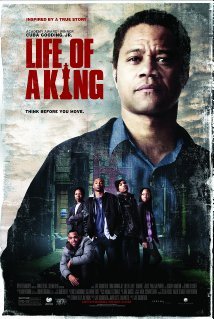 LIFE OF A KING is about a former convicted felon, Eugene Brown, who establishes Big Chair Chess Club for inner-city adolescents in the city of Washington D.C. after becoming a high school janitor. Because of his criminal history, Eugene faces several obstacles. They include obtaining and maintaining employment after getting out of prison and re-establishing a positive relationship with his children. Will Eugene’s efforts to teach the students chess have a positive impact?

LIFE OF A KING has a very inspirational narrative that accurately represents life in the inner city. The acting and cinematography are outstanding, particularly the performance of Cuba Gooding, Jr. as Eugene. Even better, LIFE OF A KING promotes a Christian, redemptive, moral worldview throughout its running time. The hero has overcome his sinful life of crime. This motivates him to bring redemption and restoration to troubled youth by teaching them how to play chess. That said, caution is advised because of some brief foul language, drug references and light violence. The negative content is rebuked, however, so LIFE OF A KING is an excellent movie for teenagers.

(CC, BBB, LL, V, AA, DD, MMM) Strong Christian worldview with very strong moral elements, with the biblical concepts of redemption and restoration being brought by the protagonist Eugene Brown to severely broken inner city high school students; about 10 obscenities, including in a song, mostly “h” or “d” words, plus one GD profanity; the level of violence is light, with a scene that contains a character getting shot after a drug deal gone bad; no sexual content; no nudity; alcohol use; smoking, marijuana use, other drug abuse, and selling illegal drugs; and, strong miscellaneous immorality, mostly rebuked, includes drug lord seeks revenge for another character putting a halt on illegal transactions of drugs among students, and drug lord motivated by greed to force more the sale of drugs.

LIFE OF A KING is about a former convicted felon, Eugene Brown, who establishes Big Chair Chess Club for inner-city adolescents in the city of Washington D.C. Because of his criminal history, Eugene faces several obstacles. They include obtaining and maintaining employment after getting out of prison and re-establishing a positive relationship with his own children. Will Eugene’s efforts to teach the students chess have a positive impact?

LIFE OF A KING has a very inspirational narrative that accurately represents the difficulties of living in the inner city. The viewing audience always appreciates a movie that tells a redemptive story set in marginalized location, especially the inner city. The narrative definitely creates an emotional catharsis. For example, toward the end, a gifted chess player’s mother, a drug addict, unexpectedly arrives at an important chess competition and loudly cheers for her son. This is one of several powerful moments in the movie that allows the audience to deeply connect with the story and its characters.

The cinematography is also outstanding, adding to the high production, artistic values of LIFE OF A KING. The entire movie is shot with high quality. The excellent cinematography adds a lot to the particular mood of each scene.

Finally, the acting in LIFE OF A KING is marvelous. The actors, especially Cuba Gooding Jr., really embrace their characters, which helped to convey the emotions, pain and personality of each character. The fantastic acting helps viewers relate to the characters and their arduous circumstances.

The dominant worldview that LIFE OF A KING undeniably promotes is strongly Christian and moral. This worldview, specifically the biblical concepts of redemption and restoration, is primarily reflected in the story’s main character, Eugene Brown. Eugene, the product of a hopeless upbringing, is released from state prison a changed man after serving time for running a criminal organization. His changed perspective motivates him to bring redemption and restoration to troubled, disenfranchised youth by teaching them how to play chess. Through the game of chess, he teaches them significant life lessons to prevent them from living a life of crime. Consequently, they develop hope for a better life and future.

The redemptive element of LIFE OF A KING serves as a reminder of the responsibility that Christians have to serve those who are marginalized. Jesus, in the book of Matthew, states, “For I was hungry and you gave me food, I was thirsty and you gave me drink, I was a stranger and you welcomed me, I was naked and you clothed me, I was sick and you visited me, I was in prison and you came to me.” Christians are the hands and feet of Jesus on earth and they represent Him when they serve the least of people. LIFE OF A KING is a beautiful representation of this gospel.

Overall, LIFE OF A KING is an inspirational drama centered on a Christian, moral worldview. Caution is advised, however, because of some brief foul language, depictions of the drug culture in the inner city that destroys lives and dashes hope, and brief violence. Otherwise, LIFE OF A KING is an excellent movie for older children, especially teenagers.

Watch LIFE OF A KING: