"One Song Can Change Everything" 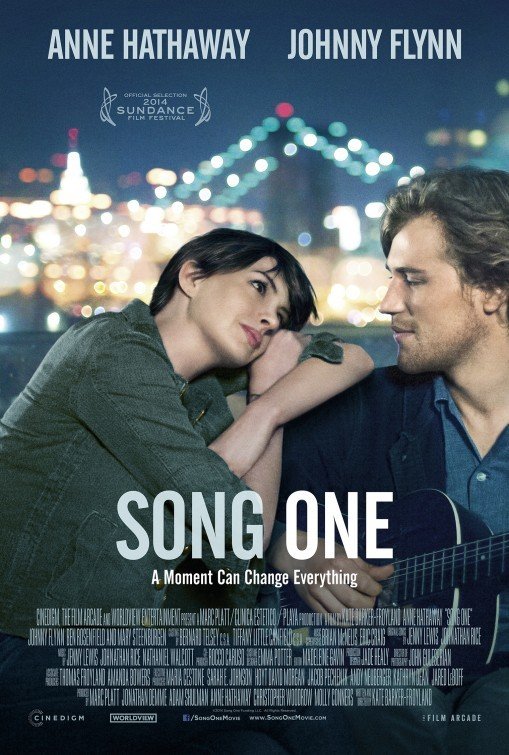 SONG ONE stars Anne Hathaway as Franny, an American anthropologist working overseas. Franny goes to her brother Henry’s bedside after a car accident leaves him comatose. They had an argument when Henry quit school to pursue music. Now, Franny makes it her mission to listen to Henry’s music, which is pretty good as she discovers. Franny finds Henry’s journal, reads it and visits places Henry enjoyed. She takes one of Henry’s songs to a British singer Henry idolized. The singer, James, is touched by Henry’s story and visits him in the hospital. Romance blossoms between James and Franny.

SONG ONE is a good drama showing the strength of family ties through adversity. The drama is mixed with well-placed comical moments. The acting and singing are well done. SONG ONE has a light moral worldview that extols family, compassion and forgiveness. However, there’s brief foul language and a gratuitous sex scene that spoils these moral elements. This scene does nothing to advance the story. So, it’s not just a moral wrong, it’s also a dramatic mistake. MOVIEGUIDE® advises extreme caution for SONG ONE.

(B, Ro, FR, LL, V, SS, N, AA, D, M) Light moral worldview as family waits and cares for family member in coma because of love, mitigated by an illicit scene between two unmarried people, and man asks in his journal if there is a God and whether “she/it” hears music; three obscenities (including one angry “f” word of despair from woman visiting her comatose brother in hospital) and eight profanities, including one using Jesus; implied car accident leaves young man in coma, and people visit him in hospital hoping he recovers; depicted fornication; upper male nudity; alcohol and some drunkenness; smoking; and, strained family relationships, death discussed.

SONG ONE opens on Henry, a young man playing guitar and singing in a New York City subway station. It’s a slow night and a few passersby toss money into his guitar case. He leaves with music playing on his headphones and is hit by a taxicab as he crosses the street.

Henry’s sister Franny (Anne Hathaway) is an anthropologist living in Northern Africa doing doctoral research on the women and culture in Morocco. Her mom notifies Franny that she should come home because Henry is hospitalized in a coma that he may never overcome.

Franny returns home to the strained relationships she left behind with her mom and her brother. She bears the guilt that she didn’t approve of Henry dropping out of college to pursue his passion for music and, after a horrible argument with him, didn’t speak to him for six months.

Franny now makes it her mission to listen to Henry’s music, view the numerous YouTube links of his performances she never opened. She finds his last journal and reads it, going to the places Henry enjoyed for food, music and solace. Franny spends countless hours at her brother’s bedside and even brings him pancakes from a diner he loved, trying to wake him.

Henry was greatly inspired by the music of James Forester, a talented indie music artist. So, Franny decides to attend his concert. She meets James and shares Henry’s story and that she thinks Henry’s music is quite good. She gives James a copy of one of Henry’s original songs and leaves.

To Franny’s surprise, James is deeply touched by Henry’s story and his song and comes to the hospital and plays a song for him. Franny and James begin spending more time together and fall in love or lust, and are sexually intimate. James shares his struggle with writing new songs since his break-up with his longstanding girlfriend some time ago.

Will Henry wake up from his coma? Will Franny’s relationship with James keep going?

SONG ONE is a well-acted drama showing the strength of family ties through adversity. Johnny Flynn, who plays James Forester, is quite an accomplished musician and singer, playing guitar and violin. The movie is a serious drama with well-placed comedic moments. It has a nice, uplifting ending showing the power of music and family.

SONG ONE has a light moral worldview that extols family, compassion and forgiveness. However, there’s brief foul language and a sex scene between Franny and James that does nothing to advance the story. So, MOVIEGUIDE® advises extreme caution for SONG ONE.