"Removing the Past, Healing the Future" 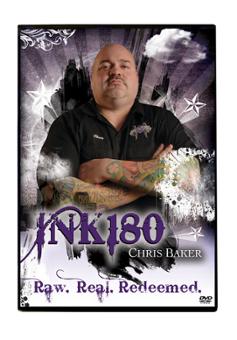 INK 180 features the ministry of tattoo artist, Chris Baker, and recounts the stories of those who have left behind a life in gangs or sexual sin. Thanks to their discovery of God’s love and Chris’ skill at removing their old tattoos, they are able to put their past behind them and move forward with the new life God has planned. Chris explains that his ministry is completely free, and most of his business is done without a profit. Though finances can be tight, it is worth it to see such broken lives changed.

INK 180 is about a subject that’s unfamiliar to most people. It delves into the life of gang members and women trapped in sex trafficking, offering a truly enlightening glimpse into the physical and emotional pain and abuse that some must face. Despite this, INK 180 does a good job showing how God’s grace can rescue a person from abysmal circumstances. Much of the content, however, contains disturbing stories of abusive home lives, violence and sexual slavery, with some images and frank discussion. So, strong caution is advised.

INK 180 glimpses the ministry of tattoo artist, Chris Baker, and features several stories of the many lives he’s touched through his artistic talent. The often secretive world of gangs, sex trafficking and the sex industry are exposed in this heart-felt documentary. Once an object of pride, tattoos can later be damaging or even deadly for some. Chris decided to devote a portion of his business to removing these tattoos for those who have left their old life behind and are trying to make a new one.

Former gang members start things off in the documentary by revealing their stories of leaving home due to bad circumstances and being brought into gang life. These gangs not only gave them the family they sought, but also food and shelter that they otherwise might not have. As part of the deal, they got tattoos as an outward sign of their gang affiliation, but when circumstances changed in their lives, the tattoos only served to hold them back. They each go into the details of their story, how they came to know Christ, and how they are now forging a new start. That’s when they pay Chris a visit to have their tattoos removed. Chris uses the time he spends with them to listen, encourage and minister to them.

The topic then moves from the stories of these former gang members to the stories of young women who found themselves immersed in a life of sexual sin. One recounts her journey from a dancer in a club to an escort in Las Vegas. Another talks of her job in the sex trafficking business. Through teary-eyed admissions, they tell of some startlingly dangerous scenarios where they found themselves before they’d finally had enough and turned to Jesus for help. One last story is of a woman who came to Chris for a tattoo to cover the scars she’d inflicted on herself due to low self-esteem and emotional pain.

Though fraught with disturbing information, this documentary is quite educational for those who aren’t familiar with such circumstances. Viewers may find themselves shedding a tear or two along with those telling these stories as the people share their testimony about how the love of God rescued them. The topic is very interesting and unique. Even if you’re not a tattoo lover, the viewer will appreciate the ministry that Chris carries out at no cost to those people who are seeking to literally remove the pain of their past. The documentary also does a nice job of showing the true cost of ministry, financially and emotionally.

Most of INK 180 deals with mature subject matter, some of which is difficult to hear. There are also multiple images of scantly-clad women, some sexual in nature and one exposing a bare back as a woman gets a tattoo. The movie also has a couple of uses of mild language, and sound effects such as gunshots or knives. All the stories contain instances of violence, abuse or sexual content. Though it’s ultimately an uplifting movie about God’s grace, the content in INK 180 is inappropriate for children and younger teens. So, strong caution is advised.