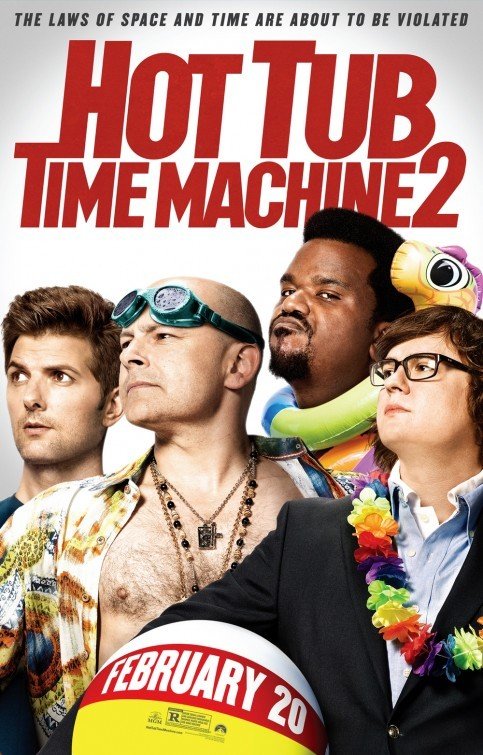 HOT TUB TIME MACHINE 2 picks up where the first movie left off, with drug-addled Lou a successful rock star and computer guru, and Nick a successful pop singer after using the time machine to steal famous songs and inventions. At one of Lou’s wild parties, an unknown assailant shoots Lou in the groin, and Nick and Lou’s son, Jacob, try to take Lou into the past to prevent his death. They end up, however, 10 years in the future in an alternate timeline where Jacob is the rich computer whiz, Lou is a loser, and Nick is a has-been singer remembered for a stupid dance song. They deduce the killer must have come from the future, not the past.

(PaPaPa, B, C, HoHo, H, Ev, LLL, VVV, SSS, NNN, AA, DDD, MM) Very strong pagan, raunchy worldview, with only very light moral elements opposing drug abuse and a moment of family reconciliation between a father and a son, a redemptive moment of apology and forgiveness, plus strong homosexual content used for comical effect and a reference to the humanist pseudo-science of multiple universes; at least 221 obscenities (mostly “f” and “s” words plus many obscenities referring to male private parts), five GD profanities, one profanity using Christ, and 14 light profanities such as Oh my God, plus character vomits; brief very strong, strong and light violence with blood when man gets shot in groin and scene is repeated where the shooting is stopped, painting of man accidentally shot, smart car asks permission to kill rude passenger and gets it but man later convinces smart car to forgive him, fighting, game show forces two men to engage in homosexual sodomy by shocking them with electricity (sodomy takes place off screen but there are crude visuals before that apparently occurs), young man falls off roof but building has a suicide-prevention force field that catches him, man’s head shot off and his headless corpse is shown lying on the ground in one image; many very strong, crude sexual references including references and jokes about depicted adultery, bestiality, homosexuality, fornication, body parts, and self-abuse, plus topless woman shows up in one lengthy scene; there’s a joke where a man’s private parts are completely exposed, upper female nudity when a topless woman shows up in one lengthy scene, shots of upper male nudity, and at least one shot of rear male nudity; alcohol use and drunkenness; many references to drug abuse, including cocaine use, hallucinations, man agrees to have a drug lasting 24 hours attached to his neck in the form of a small circular sticker, and son complains about his lazy father’s frequent drug abuse but son is later shown to have the same problem; and, young adult son complains about his “stupid” no-account father and levels several putdowns and insults at him in front of others before they reconcile, one male protagonist is often rude and obnoxious, and men use time machines to steal famous inventions and creations (including songs) of other people and get rich.

HOT TUB TIME MACHINE 2 is another loopy, abhorrent raunchfest about three numskulls who use a hot tub with time travel powers to stop the murder of one of them. The foul language and stupid lewd jokes in HOT TUB TIME MACHINE 2 come at the viewer at hyperspeed, with only a very few truly funny or clever clean jokes to honestly tickle the funny bone.

This sequel picks up almost where the first one left off, with drug-addled Lou having success as a rock star and computer guru, and Nick having great success as a pop singer using the time machine to steal famous ideas and inventions from other people. Lou, however, treats his nerdy son, Jacob, as his butler, causing great resentment in Jacob, who launches frequent one-line putdowns of his father. Meanwhile, Lou and Nick often launch into a song about how nerdy Jacob is.

At one of his wild parties, Lou gets shot in the groin by an unknown assailant, and Nick and Jacob try to take him into the past to stop the killer. They end up, however, 10 years in the future in an alternate timeline where Jacob is the rich computer whiz, his father is a loser, and Nick is a has-been singer known only for a stupid dance song. They must find the killer, whom they figure came from the future instead of the past, and stop him from using the time machine to kill Lou. Along the way, they encounter such things as a popular TV game show that ends up with the male contestants forced to engage in homosexual sodomy, a drug that’s timed to last a full 24 hours, a smart car with a mind of its own, and a dog riding a hoverboard. (The smart car jokes are probably the most clever and funniest jokes as well as the cleanest.)

HOT TUB TIME MACHINE 2 is one of the most poorly made, idiotic R-rated comedies yet to come from Hollywood. It’s badly edited and put together, with no real dramatic arcs for any of the characters. Some jokes are stupid. Some jokes are raunchy. And, some jokes are both stupid AND raunchy. The movie also has many lewd moments, some gross moments and lots of drug abuse, with only a very light message questioning such rampant drug abuse. Finally, the “f” word is used abundantly and constantly throughout the whole running time of HOT TUB TIME MACHINE 2. In fact, this movie has one of the highest rates of foul language per minute of any other movie ever made, though, sadly, it’s probably not a record amount per minute.