"Not Always So Amazing" 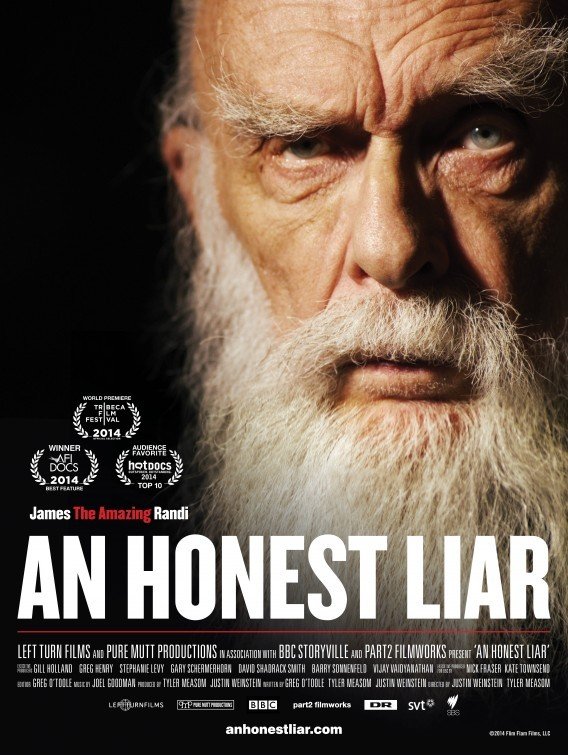 AN HONEST LIAR is a documentary about “The Amazing Randi,” a magician who exposed some New Age psychics and popular but fraudulent Christian faith healers in the 1970s and 80s. Born in 1928, James Randi began as an escape artist. In the late 1960s, he began exposing fake psychics and phony UFO stories. Then, in 1972, he exposed fake psychic Uri Geller and in the 1980s exposed a couple famous faith healers, one of whom was using a hidden listening device. The movie’s second half discusses Randi’s 25-year homosexual affair with a much younger man, who’s revealed to have a secret double identity.

AN HONEST LIAR is compelling enough to maintain the viewer’s interest. The movie clearly promotes Randi’s atheist-leaning, materialistic philosophy that science, especially rigorous scientific experiments, is the best test for truth. Though the documentary doesn’t delve into Randi’s atheism and rejection of all religious beliefs, it does promote an unbiblical, immoral homosexual agenda and an incomplete view of science. AN HONEST LIAR also has a couple “s” obscenities. Randi’s commitment to truth is commendable, but it has some flaws.

(HH, Ab, BB, RoRo, HoHoHo, PCPCPC, L, V, S, M) Strong humanist worldview with an implied anti-religious attitude, mitigated by a strong search for truth (including a commitment to exposing liars and charlatans), with strong Romantic elements supporting homosexual, left-wing political correctness; two “s” obscenities and one light exclamatory profanity by an audience member; man struggles to get out of a straightjacket and brief images of other daredevil stunts; discussion about homosexual relationship and same-sex “marriage,” with two men hugging when one man arrives “home”; no nudity; no alcohol; no smoking or drugs; and, talk about cheating and lying but rebuked, but man does engage in hoaxes to expose fake psychics, New Agers and fake faith healers.

AN HONEST LIAR is a documentary about the magician known as “The Amazing Randi,” who exposed some well-known New Age psychics and a couple popular but fraudulent Christian faith healers in the 1970s and 80s. The documentary lauds Randi’s commitment to truth, especially scientific truth, but admits Randi sometimes uses deception to expose phony psychic or supernatural phenomenon. Also, the movie eventually discusses Randi’s 25-year homosexual affair with an illegal alien from Venezuela and ends up promoting both same-sex “marriage” and homosexuality.

The movie opens with James Randi telling viewers that magicians can fool people, adding, “It’s okay to fool people as long as you’re trying to [entertain] them or teach them a lesson.” It then launches into a survey of Randi’s career as an escape artist. At some point in the late 1960s, Randi began using his scientific knowledge and expertise as a magician to debunk psychics and phony UFO stories. This second career hit the big time in 1972 when he started to debunk Israeli “psychic” Uri Geller, who became famous for bending spoons, finding hidden metal balls in silver canisters and guessing what people were drawing.

In the 1980s, Randi began debunking popular but fraudulent faith healers, including Peter Popoff and Ernest Angley. Then, in 1986, Randi met a Latino artist named Jose Alvarez, whom he soon enlisted to perform a hoax in Australia by having Jose pose as a New Age psychic who “channeled” an ancient spirit named “Carlos.” Randi and Jose then appeared on a news program in Australia, where they revealed their hoax.

In the second half of the movie, it’s revealed that Randi and Jose have had a 25-year homosexual relationship. It’s also revealed that, in 2011, the federal government arrested Jose, who was charged with identity fraud. At the time of his arrest, Jose admitted that his real name is Deyvi Peña and said that he had fled Venezuela because of persecution he allegedly experienced as a homosexual in that country. As a result of his arrest, Jose served six months in jail, was placed under house arrest for another six months and ordered to serve 150 hours of community service. Meanwhile, immigration officials agreed not to deport him, though if he leaves the USA, he can’t return. In 2013, Jose “married” Randi in Washington, even though Randi is about 33 years older than Jose. This means that, when they began their affair in 1986, Randi was 57 or 58 and Jose was only 25.

AN HONEST LIAR is compelling enough to maintain the viewer’s interest throughout its running time. The movie clearly promotes Randi’s atheist-leaning, materialistic philosophy that science, especially rigorous scientific experiments, is the best test for truth. Of course, such a philosophy is limited and doesn’t recognize that not all “science” relies on repeatable scientific experiments and that not all empirical evidence is “scientific.” Also, Randi’s worldview is inherently contradictory because science also depends on the laws of logic, or the laws of rational thinking, which can’t be tested in a science lab because the laws of logic aren’t material things but are abstract, non-material, spiritual entities.

Though the documentary doesn’t delve into Randi’s atheism and rejection of all religious beliefs, it does promote an unbiblical, immoral homosexual agenda. This may make some wonder what “The Amazing Randi” thinks about the science of human biology, which clearly shows that homosexuality is a biological dead end which would lead to the extinction of the human population in the universe if universally adopted. AN HONEST LIAR also contains a couple “s” obscenities. Because of the movie’s promotion of homosexual evil, MOVIEGUIDE® advises extreme caution for AN HONEST LIAR.