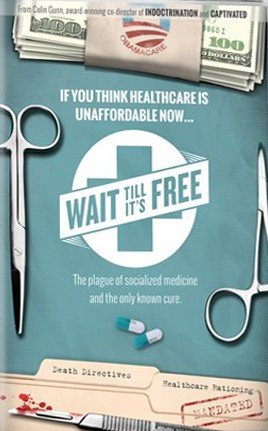 WAIT TILL IT’S FREE is a documentary by Scottish filmmaker Colin Gunn about America’s new socialized healthcare system, its dangers and alternative solutions that would return it to a more freemarket system. Colin travels the globe interviewing doctors and healthcare workers about their knowledge on how and why healthcare systems become broken. He explores the history that led us to Pres. Obama’s governmental intrusion into healthcare, drawing cogent comparisons to Britain’s nationalized system that’s clearly inferior. There is hope, he contends, as he shows examples of American doctors who’ve returned to practicing medicine the way they did before healthcare insurance programs. Colin also explores alternative programs where Christians share medical costs.

Through cheeky, witty filmmaking, Colin Gunn turns a dry topic into one that delightfully draws viewers into its depths. Using everyday, relatable examples, WAIT TILL IT’S FREE uncovers the many mysteries to the medical industry and advocates returning to a more Christian, more capitalistic healthcare model. Adults will find this documentary extremely useful in dealing with their own healthcare costs. Older children also may find WAIT TILL IT’S FREE educational.

(CCC, BBB, CapCapCap) Very strong Christian, biblical, capitalist, freemarket worldview regarding healthcare, with examples of Christian ministry and church support in providing medical care for those in need, personal responsibility for personal health emphasized, and freemarket ideas for healthcare argued, advantages of capitalism and non-governmental interference in medical administration shown in order to refute arguments for socialized medicine in short clips and historical sequences about nationalized healthcare systems; and, nothing else objectionable.

WAIT TILL IT’S FREE is an appropriately cheeky, yet insightful documentary by Scottish filmmaker Colin Gunn about America’s new socialized healthcare system, its dangers and alternative solutions that would return it to a more freemarket system.

The documentary begins with real-life examples of the difficulties people without health insurance have in paying for expensive medical treatments. Colin interviews several doctors and medical administration workers about the costs behind the patient bills. He discovers a lack of a freemarket system where there is no competition, which leaves patients with no leverage to negotiate prices and little to no knowledge about the true cost of healthcare goods and services.

The question becomes how the American healthcare system left a cash-only enterprise before the 1930s and evolved into a more socialized system. Here, Colin explores the roots of the first health insurance companies, the effects of Roosevelt’s New Deal and subsequent government bills that slowly began to nationalize medical care. The dangers of a complete governmental takeover are explained and examples given in how costs will only continue to rise if we continue along our current path.

Coming from Scotland and a single-payer healthcare system, Colin next travels to Britain to examine how the British National Health Services works. He interviews doctors and patients to get their perspective. While most Britons defend their system, they simultaneously dislike their personal experiences with it. British doctors seem to agree that even though it’s free to everyone, it is also an inferior system to the ones most other industrial countries offer. Emergency workers also attest to the abuse of the system due to the devaluation of personal responsibility in regards to health since no one’s required to pay for any treatments. The movie takes on a more ominous tone as the reality of death panels is discussed in the British system, and how they could come to prominence in the American system as the government gains more control over private healthcare.

However, not all hope is lost. Colin travels back to the United States and showcases alternatives to health insurance through medical bill sharing ministries. He also interviews doctors who’ve returned to the old-fashioned way of practicing medicine through a cash-only system, completely cutting government out of the picture, and even vastly reducing the costs of patient treatment. Here, Colin’s movie touts a system based on capitalism and freemarket control, along with the responsibilities that churches have to provide care for those in their communities who can’t afford healthcare without insurance or subsidies.

Colin does a fantastic job thoroughly researching this controversial topic, being careful not to ignore arguments from those who support socialized medicine. Reminiscent of a good British documentary, he pulls it off in a fun and entertaining way that turns what could be a dry topical movie into one that’s truly thought-provoking and absolutely relevant. Best of all, he’s crafted an informative, entertaining documentary with an insightful Christian, biblical and capitalist worldview.

WAIT TILL IT’S FREE is geared toward adults who must deal with these healthcare issues, but older children also may enjoy learning more about how the medical and health insurance industries work.