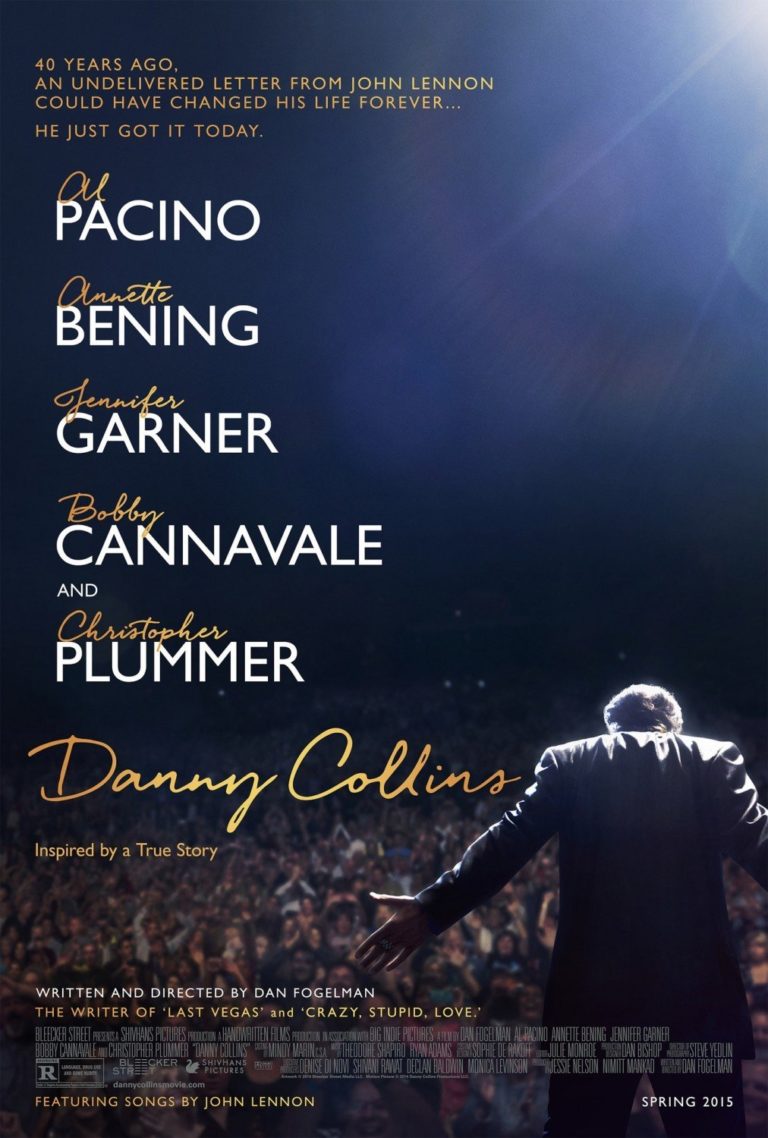 DANNY COLLINS stars All Pacino as an aging rock star who receives a 40 year-old letter from John Lennon offering to help him navigate his newfound stardom without losing his soul. Shocked and dismayed by the missed opportunity, Danny uses the letter to inspire the changes he desperately wants in his life. Leaving his cheating fiancee and world tour behind, he takes off for New Jersey. Danny has one mission in New Jersey, and that is to meet the son he fathered for the first time. Will Danny turn his life around and reconcile with his son?

DANNY COLLINS is based on a true story. This gives it a genuine quality. The movie is engaging all the way. Seeing Danny’s transformation is a joyful adventure. Most of the characters are interesting and bring a smile to the face. They capture the story’s emotion perfectly. Despite his flaws, Danny comes across as a lovable man who finally deserves some happiness in his life. Sadly, the movie has plenty of foul language, some lewd content and brief drug references. So, please note that DANNY COLLINS is excessive.

(BB, C, Pa, FR, LLL, S, NN, AA, DD, MM) Strong moral worldview with some redemptive elements where primary story revolves around making positive changes, reconciliation, sacrifice, love, friendship, charity, and family, with pagan elements of character selfishness and pursuit of pleasure, and character states that he’ll go to Hell because you can’t buy redemption; at least 50 profanities and obscenities, references to female private parts, poster on wall with the “AH” word in it; no violence; references to implied sexual immorality, unmarried couple depicted in bed together, men ogle women in bikinis; upper female nudity in one scene, woman naked in shower, girls in bikinis at pool party, man shown in underwear only, woman passed out with dress up around waste exposing her underwear; recreational drinking in several scenes and some light drunkenness in two scenes, with people passed out after party; cocaine use depicted in a couple scenes; and, fiancée is caught cheating but is not reprimanded for it, woman talks about her divorce and negative impact on children, cursing and drug use in front of a child, father ran out on son and wasn’t part of his life, man fathered child outside of marriage.

DANNY COLLINS stars Al Pacino as a bygone rock star of the 1970s era who still tours and performs all of his greatest hits for his aging fan base. He lives in an elaborate mansion, drives very expensive cars, charters private jets, drinks to fight his nerves, snorts cocaine, and is engaged to a woman less than half his age. It may seem like a nice life to most people, but Danny secretly feels washed up and unhappy with the direction his life has taken. There are many regrets that weigh him down, and only his long-time manager and best friend, Frank, truly understands his client’s melancholy existence.

After a wild birthday party at Danny’s L.A. mansion, Frank presents Danny with a gift. It turns out to be a letter written to Danny in 1972 from John Lennon. In it, Lennon states that he’d read an interview of Danny’s in a magazine and wanted to help him navigate stardom without losing his soul. Lennon listed his phone number for Danny to call. Shocked and dismayed by the missed opportunity, Danny uses the letter to inspire the changes he desperately wants in his life. Leaving his cheating fiancée and world tour behind, he takes off for New Jersey.

On the East Coast, Danny checks into an ordinary hotel room and immediately begins wooing the female hotel manager. The manager is not a fan, but Danny finds her incredibly heartwarming, attractive and much closer to his own age. Danny has one mission in New Jersey, and that is to meet the son he fathered for the first time. He finds his son, Tom, grown with a family of his own, but Tom wants nothing to do with him. However, a devastating turn of events reinforces Danny’s determination to be a part of his family’s life and rekindles his creative muse to write a new song for the first time in decades.

DANNY COLLINS is based on a true story, which brings a genuine quality to the movie. It presents a star-studded cast who are all extremely talented in their own right. Though rock star status is something not many can relate, it’s the personal story that captures the viewer’s heart. The movie is engaging all the way, and seeing the transformation of Danny is a joyful adventure. Most the characters are interesting and bring a smile to the face. They perfectly capture the story’s emotion. Despite his flaws, Danny comes across as a lovable man who finally deserves some happiness in his life. Every important beat in the story is ushered in by a Lennon soundtrack, continuously tying Danny’s life to what could have been if only he’d received the letter before Lennon died and it was too late.

Sadly, however, DANNY COLLINS contains a significant amount of foul language and some immoral behavior, including substance abuse. It has hints of wanting to be a more family-friendly movie and has a terrific story with strong moral elements and some redemptive content, but it unnecessarily contains things like brief nudity and cocaine use in a couple scenes. So, MOVIEGUIDE® advises excessive for DANNY COLLINS.