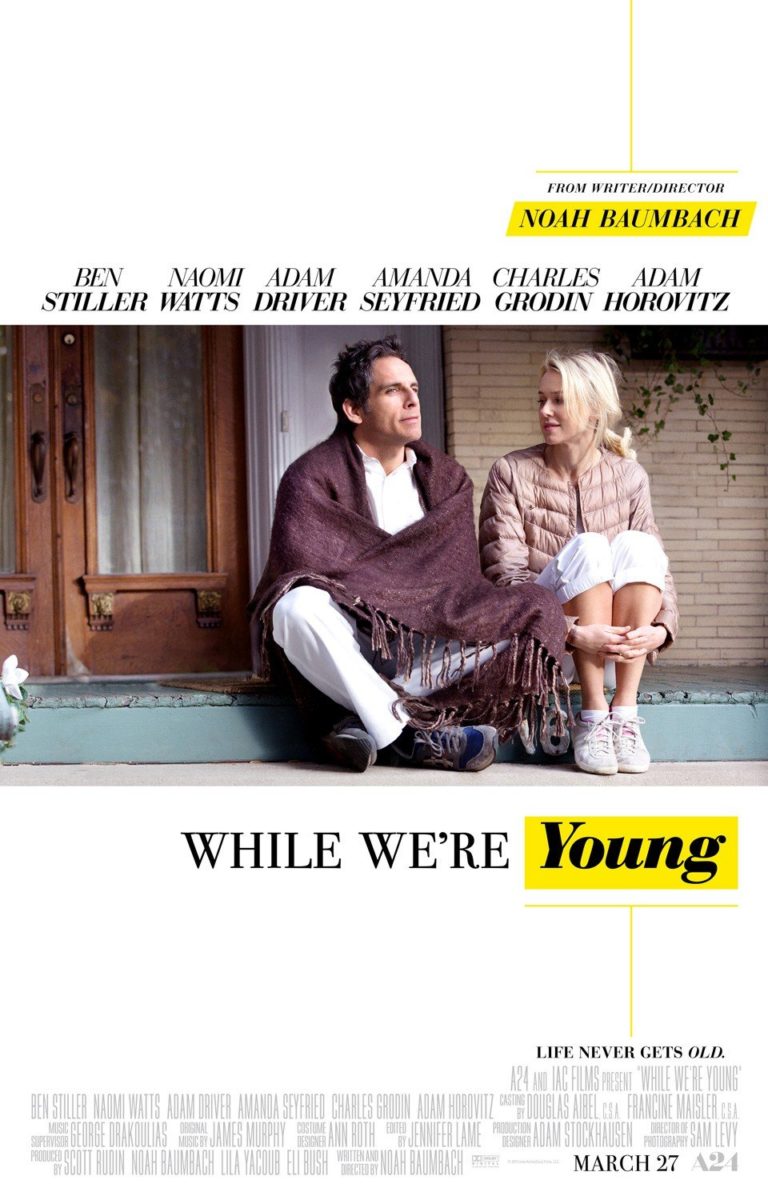 WHILE WE’RE YOUNG stars Ben Stiller as Josh, a documentary filmmaker who’s become mired in the nuances of a project he’s been developing for a decade. While teaching a continuing education class on documentary filmmaking, Josh befriends Jamie, a new documentary filmmaker, and his wife, Darby. Jamie invites Josh to co-direct a documentary he’s creating. It’s supposed to be a case of Josh mentoring Jamie, but Jamie’s movie surpasses Josh’s in creativity and popularity. This sends Josh into a jealous fit. When he finds out Jamie used unethical means to create his movie, he sets out to prove Jamie’s a fraud.

The stellar cast and interesting characters keep WHILE WE’RE YOUNG captivating all the way. There’s some great humor, as one would expect from a Ben Stiller movie. Sadly, the last act became preachy, pushing several different agendas dealing with ethical issues. There are strong false religious elements and discussion of leftist politics as documentary subjects. WHILE WE’RE YOUNG has more than 20 obscenities and profanities, and the happy marriages start to fall apart as conflicts arise. So, MOVIEGUIDE® advises extreme caution.

(RoRo, Pa, B, Co, So, P, FRFR, LL, S, N, A, D, M) Strong Romantic worldview with a mentality of follow your dreams no matter what you have to do, with success put above family and ethics, with some unethical practices checked by a moral/ethical worldview, interview subjects in documentary discuss elements of communism and socialism, American veteran is a documentary subject, and several scenes showing the practice of Shamanism; about 23 to 25 obscenities and profanities, man depicted and heard urinating, vomiting depicted on multiple occasions; no violence; married couples shown making out and kissing, married man and woman kiss people who are not their spouse; upper male nudity with women and men shown in bathing suits and woman shown in underwear and T-shirt; light recreational drinking at meals; brief cigarette smoking; and, lying used to conjure up documentary story, fictional events presented as real to documentary funders and audience, man shows no remorse for stealing content of others, and man jealous of colleague’s success.

WHILE WE’RE YOUNG stars Ben Stiller as Josh, a documentary filmmaker mired in the nuances of a project he’s been working on for a decade. Though his father-in-law, Leslie, is an award winning documentarian, Josh ignores any advice or help he offers, content to rely only on himself. He’s washed up creatively, unable to find funding to finish his six hour film.

When Josh teaches a continuing education class on documentary filmmaking, Jamie and Darby, a young married couple, attend and let Josh know what fans they are of his work. Jamie reveals he’s a documentary filmmaker himself. The couple soon start inviting Josh and his wife Cornelia to hang out and participate in their hipster lifestyle. Generational roles are reversed as Jamie and Darby shun technology and enjoy the simplicity of records, typewriters, and board games, while Josh and Cornelia are addicted to the modern complexity of gadgets.

As the couples get to know each other, Jamie invites Josh to co-direct a new documentary he’s dreamed up where he plans to go visit the first person who befriends him on Facebook instead of settling for digital-only communication. It’s supposed to be a case of Josh mentoring Jamie, but Jamie’s movie soon surpasses Josh’s in creativity and popularity. This sends Josh into a jealous fit. When he finds out Jamie has used unethical means to piece together his Facebook movie, he sets out to prove that Jamie is a fraud.

The stellar cast and interesting characters keep this WHILE WE’RE YOUNG interesting the whole way through. Jamie comes across as a lovable yet confident guy who genuinely wants to learn from those who are more experienced. He’s fun to watch, but turns out to be very conniving to get what he wants. There is some great humor, as one would expect from a Ben Stiller movie. Sadly, the last act became preachy, pushing several different agendas dealing primarily with ethical issues. This doesn’t inspire any sort of closure, and it’s difficult to know what the film was all about at the end.

There are strong false religious elements in the form of Shamanism practiced in WHILE WE’RE YOUNG. People are drugged, hallucinate and purge the evil from within by confessing their troubles and then vomiting. More than 20 curse words are uttered, and leftist political topics are discussed as subjects of the documentaries. Though the married couples are shown to have happy and faithful marriages for most of the movie, things start to fall apart as they kiss others and begin to mistreat each other. Children should definitely stay away from WHILE WE’RE YOUNG, and extreme caution is advised for adults.