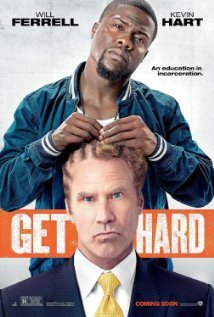 GET HARD stars Will Ferrell as James King, an investments kingpin who charged with fraud. Kevin Hart plays Darnell, the deluxe car wash owner who King hires to teach him how to survive prison despite the fact he’s never been there. Along the way, the movie sets new records for humorous racial paranoia and homosexual panic. The plot contains a series of outrageous training sequences, from ridiculous exercises to locking King into a fake prison cell in his own lavish mansion. King also tries to get various street gangs to agree to protect him, with disastrous results. Along the way, he has to figure out who framed him so he can clear his name.

Will Ferrell and Kevin Hart make an ace comic team that calls to mind the best team-ups of Gene Wilder and Richard Pryor. It’s clear Ferrell has been re-energized by working with Hart. However, the stereotypes, outrageous behavior, crude homosexual references, and foul language are frequent. The movie’s moral resolution and less offensive humor can’t make all that go away. So, GET HARD ultimately is not acceptable viewing.

(PaPaPa, BB, HoHo, PC, LLL, VV, SSS, NNN, DD, MM) Very strong, somewhat mixed pagan worldview about an investments kingpin who gets convicted of fraud and has 30 days to get tough enough to survive prison, so he hires a black guy who’s really never been to prison, with strong moral elements where man manages to clear his name and seems to become a nicer person plus black guy helping him is a hard working family man, plus strong, repeated homosexual references played for comic effect and some light politically correct contrasts are made; at least 120 obscenities and profanities with many “f” words; strong comic violence in scene where protagonist comically uses his Brazilian martial arts skills to fight off the henchmen of comic villain plus protagonist considers committing murder as part of his gang initiation in prison but the plan is put to a stop; very strong sexual content overall includes many references to homosexual oral sex and homosexual rape, including the use of hands to convey the attacks and sounds of such behavior, a sex-related scene where the man training the financial expert for prison takes him to an all-homosexual brunch restaurant and tries to convince him to learn how to conduct oral sex on a male stranger, previous scene leads to an encounter in a bathroom stall that even shows full male frontal nudity from the intended recipient of the sodomy, but protagonist runs out and makes repeated references to the movie’s title while surrounded by homosexual men dining, brief heterosexual scene of foreplay when protagonist’s fiancée dresses in lingerie and initiates sex with him; scene of full frontal male nudity and images of rear male nudity (one during heterosexual sex scene); no alcohol use; black gang openly and profusely smokes marijuana and talk of selling cocaine; and, strong miscellaneous immorality such as protagonist framed for fraud, protagonist deceived by people close to him, man lies to protagonist about being able to teach him about being tough in prison, man asks daughter to lie to loan officers to get money but his plan doesn’t work, and protagonist gets accepted by black gang after he teaches them how to launder their profits from cocaine sales in the stock market, but it seems unclear whether the scheme is put into practice.

GET HARD is an incredibly raunchy comedy about an investments kingpin who gets convicted of fraud and has 30 days to get tough enough to survive prison and the black man he hires to teach him. Despite a better, cleaner second half, GET HARD has a very strong mixed pagan worldview with lots of foul language, brought even lower by heavy, very crude homosexual content played for comic effect.

GET HARD stars Will Ferrell as James King, a blueblood investments kingpin who gets charged with fraud. Kevin Hart plays Darnell, the deluxe car wash owner, who King hires to teach him how to survive prison despite the fact he’s never been there. Along the way, the movie sets new records for scenarios involving humorous racial paranoia and homosexual panic.

The movie’s opening credits offer a savvy, fast-paced contrast between the daily lives and experiences of King and Darnell, and by extension the wealthiest in LA and those who have to hustle to survive. Darnell needs $30,000 for the down payment on a new house in a better neighborhood so he can send his young daughter to a safer, better school. Meanwhile, King makes $28 million in a day for his investment firm.

King is also engaged to the money-chasing daughter of his boss, Marty (Craig T. Nelson). He has the world on a string until federal agents crash his engagement party and charge him with over 40 counts of fraud and embezzlement. When he refuses to cop a plea, maintaining his innocence, King is sentenced to 10 years in maximum-security prison and given 30 days to get his affairs in order.

Knowing nothing about prison other than he’s guaranteed to get raped by fellow inmates, King turns to Darnell to teach him how to prepare – or “get hard” – for prison. His reason for selecting Darnell is simply that he’s the one black guy he knows. Thus, he’s so casually racist that he assumes Darnell has been to prison simply because of his skin color.

King agrees to Darnell’s request for the $30,000 he needs for Darnell’s down payment, so the lessons begin. At first, the lessons focus on getting King ready to take any kind of sexual assault thrown at him. However, King can’t manage to bring himself to try performing bathroom-stall oral sex on a homosexual guy Darnell introduces him to at a brunch hotspot. So, Darnell decides to teach King to toughen up, or “get hard,” once and for all.

Thus begins a series of outrageous training sequences, from ridiculous exercises to locking King into a fake prison cell in his own lavish mansion, to teaching him how to trash talk. King also tries to get various street gangs to agree to protect him, with disastrous results. Along the way, he also has to figure out who framed him so he can clear his name.

Ferrell and Hart make an ace comic team that calls to mind the best team-ups of Gene Wilder and Richard Pryor, in SILVER STREAK and especially STIR CRAZY. It’s clear Ferrell has been re-energized by working with Hart, the hottest standup comic on the planet right now and a fast-rising movie star to boot.

However, the stereotypes and outrageous behavior and profanity are frequent, and a bathroom-stall scene goes completely over the line of bad taste. Aside from that, GET HARD is often funny in spite of itself. In fact, the movie’s second half, which drops the frequent homosexual jokes, is much funnier as it broadens the humor to poke fun at the contrasts between criminal gangs and business leaders, and white versus black behavior and stereotypes.

That said, the foul language and vulgar comedy in GET HARD is definitely excessive. The movie’s moral resolution and less offensive humor can’t make that go away.