ROAD TO THE OPEN 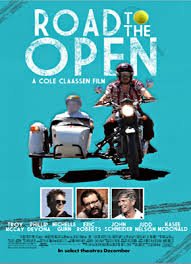 ROAD TO THE OPEN is a quirky, but classic, underdog comedy about two best friends trying their luck at competing in a professional tennis tournament. Miles, an eccentric, anger prone guy convinces his friend Jerry, a single father of a 10-year-old, to compete, but Jerry has his doubts. Throughout their training, Miles and Jerry face opponents, per-sonal hardships and rocky relationships. They push onward, however, and take every op-portunity they can get, even when it seems like there’s no hope. Miles often quotes mov-ies to inspire Jerry and other characters into not giving up.

While it may not be the most original idea, ROAD TO THE OPEN makes up for its flaws with an enormous amount of heart and depth. This silly-on-the-surface movie tackles some emotional themes in a very mature, realistic manner. It’s ultimately an entertaining movie overall that captures the viewer’s attention just long enough to get through the low points. There are some brief, minor questionable moments, but ROAD TO THE OPEN features strong Christian, moral lessons. ROAD TO THE OPEN extols prayer and has a positive father-daughter relationship.

(CC, BB, Ro, L, V, AA, M) Strong Christian, moral, biblical themes includ-ing prayer and perseverance extolled, plus positive father-daughter relationship, with some light Romantic elements; one light obscenity and minor crude humor; minor come-dic violence including slaps and punches; no sex; no nudity, just light female cleavage; a scene where a character comes home drunk; no smoking or drugs; and, one character has problems with anger management and has a “life coach.”

ROAD TO THE OPEN is a comedy about two best friends and tennis enthu-siasts, Jerry and Miles, who try their luck at getting into a professional tournament called “The Open.” Miles is a single, carefree and eccentric guy who struggles with anger man-agement. Jerry is recently widowed, has a 10t-year-old daughter and struggles with trying to balance his family, friends, work, and love life.

Jerry works in a hospital doing laundry where he works his hardest to provide for his daughter, who is the one person in his life that matters most to him. He doesn’t have much of a social life or any friends, except for Miles, and it’s apparent that Tyler, his daughter, is his pride and joy. The two of them do everything together and often have dinner on the roof of their building, which they call “The Penthouse.”

While Jerry wishes only to see his daughter happy, she longs for him to be happy as well. She asks him one night, “Dad, do you ever think you’re going to get married again?” The question inspires him to get up the nerve to ask Sam, a friend from work, out on a date. Sam says yes and admits to have liked him for a while now.

As Jerry and Miles train to qualify for the tournament, they learn that their main competi-tion is the Gallant brothers, often nicknamed “The Goliath Brothers”, a prestigious duo who have not lost to anyone in over a decade. Will repeated failure, rocky relationships and emotional turmoil get in the way of Jerry and Miles’ success?

ROAD TO THE OPEN is a quirky, fun and classic underdog tale that isn’t the most original. However, what it lacks in creativity, it makes up for in heart. For a comedy, sur-prisingly difficult themes and subjects are tackled and handled very maturely. It isn’t per-fectly acted, but there is too much charm and passion to be too affected by this problem. There are lessons to be learned by everyone watching the movie, from coping with loss to learning to move on to never giving up when things seem lost.

Miles often quotes movies to inspire Jerry and other characters into not giving up. This gets a bit old rather quickly, but a repeated line is “No guts, no glory.” Throughout the movie, certain characters start to give up and lose hope, but they are reminded that, “When bad things happen, life goes on, and you need to move on.”

ROAD TO THE OPEN has minor instances of crude humor and a little bit of slapstick violence, but they are not strong or many. It has a strong Christian, moral worldview that extols prayer and that also contains a positive father-daughter relationship.

ROAD TO THE OPEN is appropriate entertainment for older children to adults.

Watch ROAD TO THE OPEN: