"You Won’t Want to Spend Time with This Family" 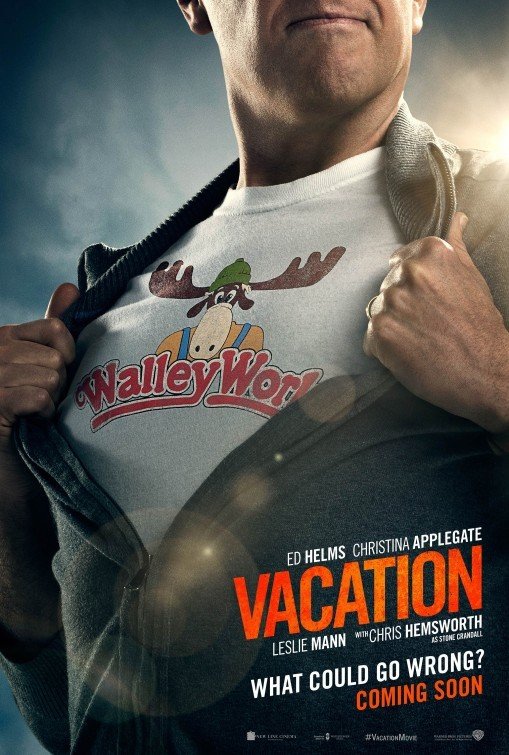 VACATION is a reboot of a 1983 comedy. It stars Ed Helms as Rusty Griswold, a \ father who suddenly takes his family on a cross-country trip to the amusement park Walley World, where his own dad took him decades ago. Rusty has grown up to be a pilot for the cheap airline Econo Air and has no self-esteem about himself and his career status. Because the trip was planned so hastily, Rusty is stuck with an Albanian car that has endless bizarre features making it a nightmare to drive. More comical complications ensue.

Ed Helms is badly miscast as Rusty. He’s alternately too sad-sack or flat-out creepy in many scenes. VACATION also has lots of strong foul language, crude references, too many scatological moments, and some explicit, excessive nudity. Despite all the trashy moments, the Griswolds do stay together and are brought closer by their trip, so the movie does eventually endorse the strength of family. However, it comes across much too little too late. So, VACATION is unacceptable, abhorrent entertainment that fails to deliver many real laughs or consistently uplifting moments.

(PaPaPa, B, LLL, VV, SS, NNN, AA, MM) Very strong pagan worldview, with a light moral element toward the end promoting family; at least 85 obscenities (including about 50 “f” words) and 15 profanities, plus vomiting, nose snot, and people accidentally eat raw sewage thinking it’s mud, but it’s not; some strong violent comedy includes little brother puts a plastic bag over his brother’s head, people fight over last seats for the day on a rollercoaster with kicking and spitting, and dad crashes an SUV into a cow and has to be hosed down because he’s covered in bovine blood and guts; strong crude sexual references include references to mother’s notorious sexual promiscuity in college, married couple discuss wild sexual behavior, people show up at Four Corners National Monument to engage in lewd activity on monument, man flirts with another man’s wife, and father tries to discuss sex and relationships with his oldest son but says wildly inappropriate things by mistake or accident that teenage girl interested in his son thinks he’s a pedophile and runs away; image of male organ, upper female nudity in one scene, and man in revealing underwear; alcohol use and drunkenness; no smoking or drug references; and, sibling rivalry, married couple are having problems but fix them at the end, rude behavior.

A reboot of a 1983 comedy, VACATION stars Ed Helm as a married father who takes his own family on a cross-country trip to the amusement park Walley World, only to meet a series of disastrous events. VACATION has a strong pagan worldview and is marred throughout by foul language and overly gross, lewd attempts at humor that are sure to offend even the biggest fans of R-rated comedy, and especially any discerning, media-wise viewers.

The movie follows Rusty (Ed Helms), who has grown up to be a pilot for the cheap airline Econo Air and has no self-esteem about himself and his career status. He does love his family, however, but when neighbors tell his wife about their glamorous trip to Paris, he realizes their annual family trip to a lake cabin just won’t cut it anymore.

Instead, Rusty decides to take them on a cross-country road trip to Walley World, the amusement park his dad took him as a boy in the original 1983 movie. While that movie was R-rated, it was relatively tame for the rating, while this movie sadly spends about 60 percent of its attempts at comedy on extremely offensive or gross attempts at humor that go too far and fall flat.

There’s no real point to detailing the plot in depth, as it unfolds in episodic fashion. Because he decided to take the trip last minute on Memorial Day week, Rusty is stuck with an Albanian car that has seemingly endless bizarre features making it a nightmare to drive. The fact that the movie’s writer-directors, Jonathan Goldstein and John Francis Daley, come up with some truly funny and inventive moments with a car from Albania shows that they do have talent and know better than to wallow in comic muck.

Sadly, scatological and outright sexual humor overwhelms the movie. For instance, the family smears themselves in what they think is healing mud while wading in a spring, only to find they’re covered in raw sewage. The younger son unleashes terrible profanity against both his brother and parents, while also attempting to humiliate him at every turn.

The mom is revealed to have been legendarily promiscuous and an alcohol abuser while in college, and then gets drunk and vomits in front of her sons when she’s accused of having become too sedate as a mom. Then, the parents stumble across a large group of people waiting to fornicate on the Four Corners National Monument, just as they are about to try to do so themselves. There are even worse moments than these.

Also, the movie’s central role of Rusty is badly miscast. Not only would Will Ferrell look much more plausible as original star Chevy Chase’s son, but he would have the same goofy spirit as Chase. Instead, Ed Helms as Rusty is alternately too sad-sack or flat-out creepy in many scenes. For example, some of the movie’s most cringe-inducing moments have him making wildly inappropriate comments by accident to his son as he tries to give him advice on sex or tries to make him look good to a girl, failing disastrously. Instead of being a caring dad, Helms comes across almost like a pedophile with his comments.

Despite her gross moments, Christina Applegate delivers the movie’s strongest performance and gets some real laughs during the movie’s cleaner moments. The boys who play the sons are also funny at moments, though the parents of the younger actor should perhaps be investigated by child protection authorities for letting a preteen say some truly terrible dirty talk.

There is a brief scene with Chevy Chase when the family visits him and original movie wife/mom Beverly D’Angelo, but both of these actors from the original movie have so little to do that their roles are pretty pointless. The strangest moment comes at what should be the movie’s comedic climax, when the action stops abruptly and cuts to the aftermath without remotely touching on the climax’s full laugh potential.

Despite all the trashy moments, the Griswolds do stay together and are brought closer by their trip, so the movie does ultimately endorse the strength of family. However, it comes across too little too late, and any media-wise viewer would know this limited lesson anyway without having to be taught it by a movie, especially this one.

Anyone with comic or moral taste will want to take a vacation away from any theater showing this poorly done, offensive remake.