"A Visual Treat, But Not for the Whole Family" 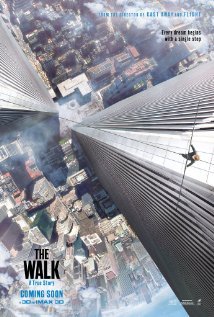 THE WALK, about French tightrope Walker Philippe Petit, is a visual treat from legendary filmmaker Robert Zemeckis of BACK TO THE FUTURE and FORREST GUMP fame. Recently re-visited in the Academy Award winning documentary MAN ON WIRE, THE WALK puts the iconic 1974 high-wire walk across the top of New York City’s Twin Towers in glorious IMAX 3D. From a street performer to the most daring act the world has seen, Philippe tells his story of everything that had to happen for this one of a kind stunt to occur. It’s hard not to love THE WALK due to the sheer audacity and spectacular scale of Philippe’s stunt, shown in a way never before possible. The vertigo-inducing climax is awe-inspiring. However, it takes some time before the plot gets moving. Sadly, Philippe’s verbal defense of anarchy reflects a clearly dangerous Romantic worldview. THE WALK has shockingly earned a PG rating from the MPAA, but it’s by no means family friendly. The movie’s illegal activity, references to drug use, brief male nudity, and significant amount of foul language require strong caution.

(RoRoRo, C, P, LL, V, S, N, A, DD, M) Very strong Romantic worldview on life, beauty and art as an existential experience without order, with light references to Providence, demons, and man says “God bless” to the police officers trying to pull him off the high-wire; 16 obscenities (including multiple “s” words) and six profanities (including strong uses of Christ’s name); a man steps on a nail that goes straight through his foot, man does daring and dangerous high-wire act; no sexual content, though cohabitation is shown, and unmarried man and women sleep in same bed, light kissing; upper and rear male nudity, private parts are conveniently hidden by shadows; light drinking of wine; smoking and stoned man smokes pot; and, lying and illegal activity like trespassing (though man isn’t prosecuted).

THE WALK, about high-wire walker Philippe Petit is a visual treat from legendary writer/director Robert Zemeckis (BACK TO THE FUTURE, FORREST GUMP, CAST AWAY). Recently re-visited in the Academy Award winning documentary MAN ON WIRE, THE WALK puts the iconic high-wire walk across the top of New York City’s Twin Towers in 1974 in glorious IMAX 3D. While the movie is about one terrifyingly epic walk, the center of the story is about a man: Philippe Petit, portrayed by Joseph Gordon-Levitt. Philippe address the audience with the cityscape of New York City and the towering World Trade Center directly behind him. He tells the audience of his dream to walk across the two towers, a dream he had since he was a young performer in France, and he first read about the construction of the skyscrapers in the newspaper. As soon as he saw that article, his destiny was sealed. As a young teenager, Philippe was forced to take his dreams to the street of Paris temporarily to make money street performing. A budding mentorship begins between Philippe and a Czech circus owner and high-wire act performer, Papa Rudy (Ben Kingsley). Papa Rudy teaches Phileppe everything he knows about high-wire walking, but Philippe isn’t an immediate success. In fact, his first performance over a French river ends with Philippe extremely wet and utterly embarrassed. However, he doesn’t give up. His next feat takes him to the cathedral of Notre Dame in Paris and is an incredible success, even though it results in him being arrested for trespassing. Years go by and Philippe is still as committed as ever to accomplish his dream to walk across the twin towers. Along with his companion and lover, Annie, Philippe begins to recruit accomplices for an illegal mission he calls “The Coup.” The challenges the team faces seem insurmountable. How can they actually pass a wire across the towers undetected? How will they get their equipment to the top of the towers without being caught? Can the rope be stabilized properly at such incredible heights? And most of all, will this feat end with Philippe losing his life? From the very beginning, THE WALK relies heavily on Philippe’s narration and plays out a series of vignette’s about his rising talents as a high-wire performer. It’s not until that actual planning of The Coup that the plot really starts to move forward. Joseph Gordon-Levitt’s greatest challenge as Philippe may be convincing audiences of his French accent, but he quickly wins over the audience, especially in scenes where he speaks entirely in French. It’s hard not to love THE WALK due to the sheer audacity and scale of Philippe’s stunt, which is shown in a way that’s never before been possible, through IMAX 3D. The vertigo-inducing climax is awe-inspiring. Without saying so, the movie pays tribute to the tragic terrorist attack on September 11, 2001 resulting in the collapse of the Twin Towers and the loss of thousands of lives. Aided by a moving theme composed by long-time Zemeckis collaborator Alan Silvestri, this unspoken tribute provides THE WALK’s heart and soul. When asked why he would do such a stunt, Philippe pontificates on his existential worldview of life, beauty and meaning, but nothing concrete is ever explored or stated. In one moment, he says, “All artists are anarchists,” a clearly ridiculous Romantic notion when you consider that the entire act of high-wire walking requires order and rules. In another moment, Philippe does speak of Providence, which points to a higher calling, but, for the most part, the characters are godless. THE WALK has shockingly earned a PG rating from the MPAA, but it’s by no means family friendly. The movie’s illegal activity, references to drug use, brief male nudity, and significant amount of foul language require extreme caution.