SCOUTS GUIDE TO THE ZOMBIE APOCALYPSE 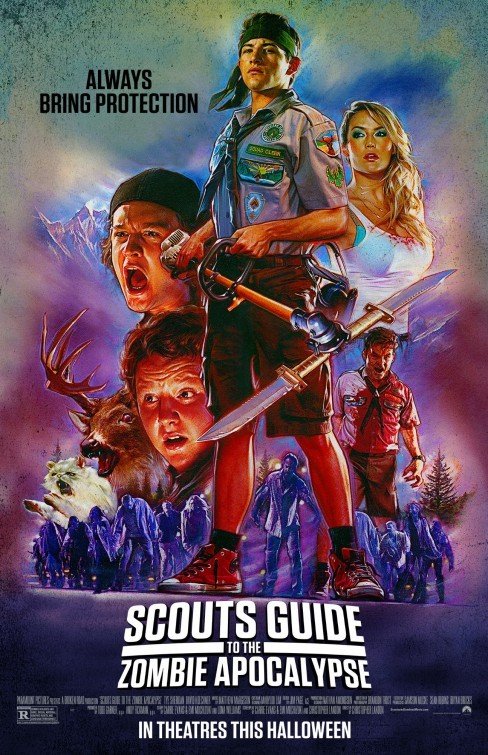 SCOUTS GUIDE TO THE ZOMBIE APOCALYPSE is an ultraviolent, crude R-rated horror comedy. The story follows three teenagers in a small town who are their high school’s only Scout members. There’s good boy Ben, troublemaking Carter and pudgy nerd Augie. They are going on an annual camping trip with their Scout leader. Ben and Carter want to stop being Scouts, leaving Augie in the lurch. The Scouts make a supply run into town for a wild party, only to find the streets are empty, and zombies are lurking everywhere. Helping them fight the zombies is a cocktail waitress from the local strip club. SCOUTS GUIDE TO THE ZOMBIE APOCALYPSE has some spirited performances and inventive, touching interludes. However, there’s simply not enough story to sustain even a 90-minute movie. Also, the final big battle at the party takes place in a murky warehouse and feels cheap. SCOUTS GUIDE has some positive messages about friendship, loyalty and courage. It even makes Scouting look like fun. However, the movie’s filled with lots of wall-to-wall bloody zombie violence, crude sexual references and foul language.

(PaPa, B, HoHo, LLL, VVV, SSS, NNN, AA, DD, MM) Strong mixed, immoral pagan worldview with plenty of lewd content involving teenagers and some moral elements about friendship, loyalty and courage, plus two girls depicted kissing and a joke about crossdressing as Dolly Parton; about 93 obscenities (about half of them “f” words), nine strong profanities and eight light profanities; extreme and strong bloody, scary violence, mostly involving cannibalistic zombies, such as very violent zombie attacks, many zombies crack and explode below their necks and leave gaping holes showing their internal organs and often spewing or dripping a lot of blood, decapitations, boys fighting zombies crash cars through a couple doors, and numerous weapons are used against human beings turned into zombies to kill them, including weed whackers, propellers, arrows, fire, and a massive bomb; many crude verbal and visual jokes about fornication, oral sex, strippers, detached zombie male organ lands in another zombie’s mouth, implied oral sex with a zombie, two girls kiss at a party, teenage boys enter strip club called “Lawrence of Alabia” and find a female zombie stripping, and a comical reference to crossdressing and to sleeping with someone’s mother; brief images of zombie’s private parts which become detached, two or three images of upper female nudity, and stripper zombie in skimpy clothing and female cleavage; underage drinking and buying beer; no smoking, but a verbal joke about LSD; and, lying, gossip and some cynical jokes about scouting.

SCOUTS GUIDE TO THE ZOMBIE APOCALYPSE is an R-rated horror comedy about how three high school outcasts, who make up their school’s Boy Scouts style club, learn to be heroes in one crazy night by fighting thousands of zombies off using their Scout training. SCOUTS GUIDE TO THE ZOMBIE APOCALYPSE contains lots of extreme violence, lewd content and foul language with a mixed worldview underscored by light moral elements about friendship, loyalty and courage. The story follows three teenagers in a small town who are their high school’s only Scout members. There’s good boy Ben (Tye Sheridan), troublemaking Carter (Logan Miller) and pudgy nerd Augie (Joey Morgan). They are about to go on an annual camping trip with their Scout Leader Rogers (David Koechner). Ben and Carter are planning to sneak out to a big party and tell Augie that night that they’re quitting Scouting because they feel it ruins their social lives, a decision that will leave Augie without any friends. Meanwhile, a hospital janitor accidentally revives a zombie under quarantine. When he’s attacked and attacks a doctor, a chain of zombie attacks affects the entire town, including killing their Scout leader. The Scouts make a supply run into town only to find the streets are empty, and zombies are lurking everywhere. They run into a woman they know who’s a cocktail waitress at the strip club, named Denise (Sarah Dumont). She reveals what’s really happening and helps them team up against the zombies. She warns the Scouts the military is coming to fight the zombies and they have just two hours to kill the monsters and save their town from being bombed. Thus, begins an inventive and comical but graphic battle royal. SCOUTS GUIDE TO THE ZOMBIE APOCALYPSE is yet another in a seemingly endless string of zombie movies and TV shows, but it has some clever ideas and genuine heart in the way it depicts its heroes’ friendship. Writers Emi Mochizuki and Carrie Evans handle the shifting relationships of teenage boys moving in different directions well, and Director Christopher Landon draws spirited performances out of his entire cast. However, there’s simply not enough story to sustain even a 90-minute movie, with the movie feeling padded for a time in the middle. Also, the final showdown at the giant party feels cheap because it’s set in a warehouse, and the action in that scene veers between fun and murky, as the action is shot with strobe lights obscuring the action. SCOUTS GUIDE has some positive messages about friendship, loyalty and courage, and it makes Scouting (though they don’t specify it as Boy Scouts, it’s obvious that’s what these boys are) look like fun. However, the movie is filled with lots of wall-to-wall bloody zombie violence, crude sexual references and foul language.