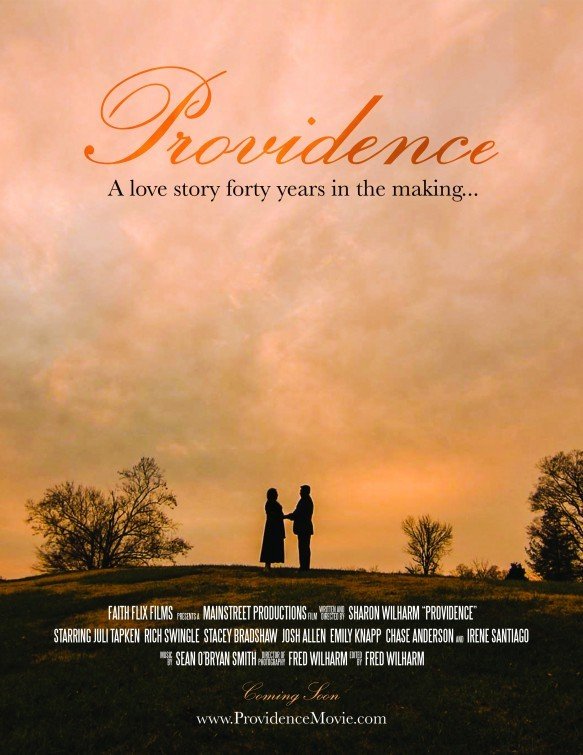 PROVIDENCE is a fun, heartwarming love story. It follows two people who have known each other their whole lives. Rachel Cartwright and Mitchell Little grow up in a small Tennessee town named Providence. One year, Rachel receives a beautiful red Bible from her grandmother. She starts reading it, but her mother accidentally throws it out. Mitchell gets it and reads it too. Eventually, he and Rachel establish a longtime friendship in high school. The years pass by, their friendship begins to fade, and they go their separate ways. However, a tragedy brings them back together 40 years later.

PROVIDENCE is fun story that really proves love conquers all. It also has a great message reminding viewers that having a strong relationship with God, and praying through the tough times, will bring you many great blessings, including the things your heart truly desires. PROVIDENCE is a silent movie, with only music playing from scene to scene. This places a huge demand on the acting, which could be better. However, PROVIDENCE is a sweet love story that’s fun for the whole family to watch.

(CC, BB, V, M) Strong Christian, moral worldview about having a strong relationship with God, praying through life’s toughest circumstances, reading the Bible, and believing that God’s timing will bring you your true love; no foul language; light violence with the death of an elderly woman because of old age, and the death of two teenage girls in a car accident; no sexual content but an implied kiss between teenagers; no nudity; no alcohol use; no smoking or drug use; and, a couple boys sneak into a girls room and dance with her and her friends.

PROVIDENCE is a fun, heartwarming love story, 40 years in the making. This adventure follows two people who have known each other their whole lives, who have gone through ups and downs together as friends, but eventually it takes a tragedy to bring them together 40 years later.

Young Rachel Cartwright and Mitchell Little both grew up in a little Tennessee town named Providence. The two lived their separate lives, she with her parents and elderly grandmother in their nice big house, and he with his struggling single mother in a small apartment.

One year, Rachel is gifted a beautiful red Bible for Christmas by her grandmother, and she begins to spend all her free time reading page after page of it. As her grandmother becomes very ill and eventually passes away, Rachel’s mother carelessly throws the Bible in a box with other things to give away. The Bible eventually finds its way into the hands of little Mitchell, who also reads and takes in every word of every page.

This act of daily reading the Bible forever changes Mitchell’s life, and he soon becomes a believer, witnessing to his mother and everyone else around him. This is when he and Rachel’s life starts to cross and intertwine together.

Both end up going to the same school. In high school, they begin to form a healthy blooming friendship. Although this friendship began because of the unfortunate death of her two friends, the love of Christ begins to shine over Rachel’s life through Mitchell during this time.

The years pass, and their friendship begins to fade. Rachel becomes a photographer, and Mitchell becomes a pastor, but they are never too far away from each other. In their adult years, a tragedy with Rachel’s mother finally brings them back together and lets them be together like they were always meant to be.

PROVIDENCE is a fun story that really proves love conquers all. Time, distance and life circumstances are no match for the love two people have for each other. This movie has a great message all while reminding you that having a strong relationship with God, and praying through the tough times, will bring you many great blessings including the things your heart truly desires.

This movie is a silent film, with only music playing from scene to scene. Even though the song choices were picked well and appropriately for each part of the movie, the acting falls short. Since there’s no dialogue among any of the characters, there was a huge demand placed on the acting, which left lots of room for over-emphasized body and mouth movements and odd times of eye contact.

Overall, though, PROVIDENCE is a very sweet love story that’s fun for the whole family to watch.