"Darkness Can’t Exist in the Light" 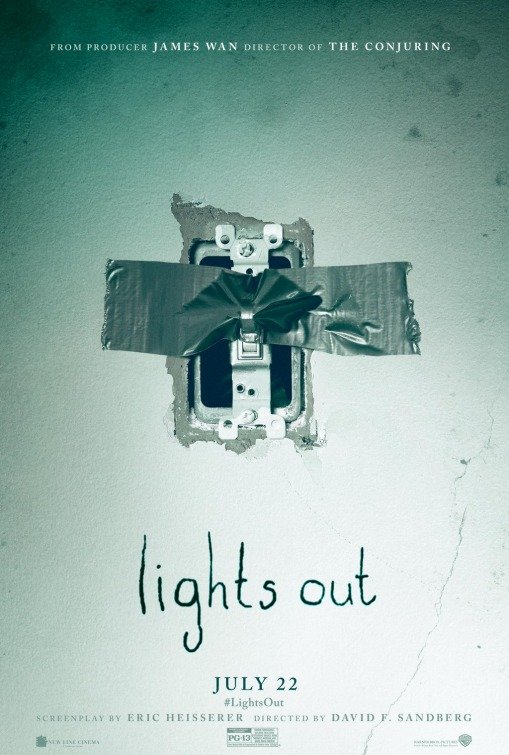 LIGHTS OUT is a superbly directed horror thriller. A young woman, Rebecca, tires to save her younger brother from a figure that lurks in the shadows of their mother’s home. As Rebecca investigates, she learns her mother had a mentally ill childhood friend named Diana, who died. Now, Diana’s spirit has attached herself to Rebecca’s mother. Rebecca and her brother must stop Diana before she kills them and others.

LIGHTS OUT accomplishes something few horror movies do: find a way to be creative and suspenseful without gratuitous violence or lewd content. As far as supernatural thrillers go, however, LIGHTS OUT fails to address the supernatural problem with a supernatural solution. The characters do fight to protect one another, show courage and even display self-sacrifice. There’s also a symbolic element of light casting out evil, which echoes what Jesus says in John 3:19 to 21. LIGHTS OUT doesn’t have graphic or extreme violence, but there are a few gruesome, scary and intense moments and some brief foul language. Because of those elements and the occult, demonic villain, MOVIEGUIDE® advises extreme caution for LIGHTS OUT.

(BB, C, O, L, VV, S, N, DD, M) Strong moral worldview about family, courage and redemptive self-sacrifice, with light Christian symbolism about light casting out evil where good wins over evil in the end, but occult elements where demonic supernatural forces are not defeated by faith or similar supernatural means; five obscenities and three profanities; strong intense, scary violence includes man is killed by a demonic spirit, and his mangled body is seen all bloody, two police officers are killed (one of them with has his eyes gouged), (SPOILER) woman shoots herself to save her family from the spirit, and many moments of intense peril with scary images of the spirit’s figure in the dark; implied fornication with an unmarried couple shown lying in bed, and a reference to going “another round”; no explicit sexual nudity, but upper male nudity, woman is seen in undergarments, and woman changes behind a foggy glass; no alcohol use; no smoking but a woman has a marijuana bong in her apartment; and, slighty dysfunctional family.

LIGHTS OUT is a superbly directed horror movie. It opens in a warehouse where a man is working late. Video chatting with his son, the two talk about the sickness the boy’s mother has, and the dad reassures his son he’s going to make Mom better. Later while locking up, the man notices a figure in the shadows of the warehouse. This figure chases him into an office and kills him the dark.

Not too long after this death, the man’s son, Martin, causes concern at school because he continually falls asleep in class. The school nurse calls Martin’s older sister, Rebecca, who ran away from home when she was younger because of the mother, Sophie’s, mental illness. When Rebecca sees her mother isn’t stable, she takes Martin to stay with her for the night so he can get some sleep.

That night, however, Rebecca sees a figure in the shadows that disappears every time the flickering outdoor light turns on, but then reappears when the light turns off. The figure lunges for Rebecca, but she happens to turn the light on just in time, and the figure disappears.

Rebecca begins to investigate what this figure is and learns about a friend her mother had in a mental facility when she was younger. This friend, Diana, was obsessed with Sophie when they were children, but was thought to be dead after an experiment gone wrong. Now, Diana is connected to Sophie and won’t let anyone suppress her, including Rebecca and Martin.

Can the two siblings stop this evil spirit before it kills them?

LIGHTS OUT accomplishes something very few horror movies do: find a way to be creative and incredibly suspenseful without gratuitous violence or lewd content. The filmmakers seem to clearly understand that, to create sustained suspense, you need to have characters the audience can care about and leave what’s in the shadows left to the imagination. Add eerie music to the mix, combine it with a simple background story for the villain, and the movie puts viewers on the edge of their seats.

As far as supernatural thrillers go, however, LIGHTS OUT fails to address the supernatural problem with a supernatural answer. The characters do fight to protect one another, show courage and are even ready to sacrifice themselves. The movie also has a symbolic redemptive element of light casting out evil, which echoes what Jesus says in John 3:19-21 (see also John 1:4-9).

LIGHTS OUT doesn’t have graphic, extreme violence, but there are a few gruesome moments and some brief foul language. Between those elements and the movie’s scary, occult, demonic presence, extreme caution is advised.