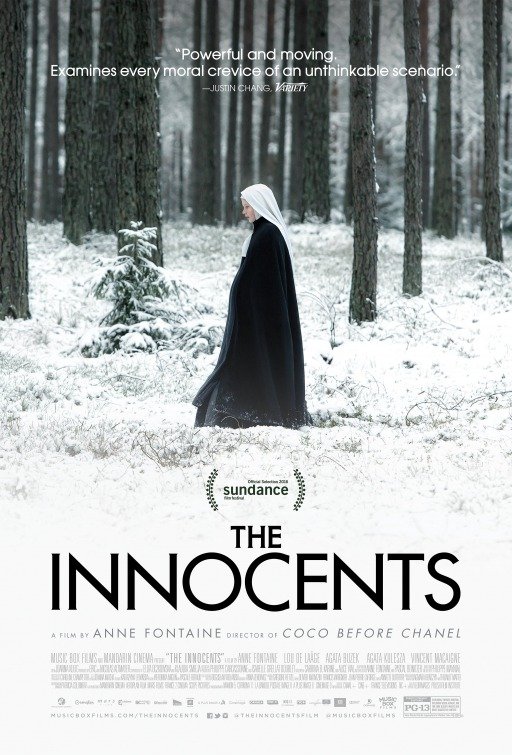 Based on a true story, THE INNOCENTS is a French-Polish production about several Polish Roman Catholic nuns who were raped by Soviet soldiers during World War II. Against the Mother Superior’s orders, one of the convent’s nuns goes to the French Red Cross and asks a nurse to help. The French nurse, Mathilde, is only allowed to help if she promises to keep the pregnancies a secret and not bring in other doctors. With at least seven nuns pregnant, it’s an overwhelming task. However, Mathilde descides to help, despite the fact she’s an ardent atheist.

THE INNOCENTS is a very emotional and draining movie for much of its running time. However, the performances, writing, direction, and cinematography are superb. Aside from the Mother Superior, who harbors a horrible secret, the movie shows the nuns in a thoroughly sympathetic and positive light. THE INNOCENTS is too heavy for children to see, but media-wise older teenagers and adults probably will find it to be one of the most compelling movie about faith they will ever experience. Extreme caution is advised, however, for tough content.

(CCC, BBB, H, Ab, ACAC, V, S, MM) Very strong Christian, moral worldview overall, but one character is an atheist, another loses her faith and flees, a second Christian character keeps a couple terrible secrets, plus Soviet soldiers are shown to be heartless and evil; no foul language; some references to past rapes, and a female doctor is confronted by Soviet troops, who try to rape her, but one of their leaders stops them; discussions of rape, an implied premarital relationship between two doctors who kiss passionately and later are seen lying in bed together, and a reference to syphilis; no nudity; no alcohol use; no smoking or rugs; and, some deceit and secrets are kept.

THE INNOCENTS, a French-Polish production, is the powerful, initially disturbing but ultimately hopeful true story of several Polish Roman Catholic nuns raped by Soviet soldiers in WWII and how a French Red Cross doctor risks her career to help several of the nuns through their resulting pregnancies. THE INNOCENTS has a strong Christian, moral worldview overall and is one of the year’s best dramas, but strong caution is advised because of some tough content.

The story takes place in Poland during the winter of 1945. A young intern working with the French Red Cross, named Mathilde (Lou de Laage), is confronted by a young nun, who has run miles to get to the Red Cross clinic. The nun pleads for help but can’t specify why. Mathilde coldly tells her to find the Polish Red Cross instead until she looks out the clinic window and finds the nun on her knees in the snow, praying intently through tears.

At that point, Mathilde sneaks out and goes with the nun to her convent. There, she finds that her mission must change. She’s supposed to help find, treat and repatriate French survivors of the German camps, but her life and beliefs change when she discovers the advanced state of pregnancy that affects several of the convent’s Sisters.

The mother superior is incensed that the nun snuck out for help because she’s afraid that word of the pregnancies will cause trouble with the Vatican and lead to their convent being shut down. So, Mathilde’s only allowed to help if she promises to keep it a secret and not bring in other doctors. With at least seven nuns pregnant, it’s an overwhelming secret to keep and a big workload to maintain on top of her normal job. However, Mathilde helps despite the fact she’s an ardent atheist.

THE INNOCENTS is an absorbing drama. It shows the many sacrifices and dangers Mathilde has to endure in order to help the nuns while keeping her job and staying alive. It also shows the dramatic effect that working with the nuns has on her personality, although her love for the nuns and determination to help them never translates into a conversion to faith.

However, the movie does show the nuns in a thoroughly sympathetic and positive light, aside from the Mother Superior who harbors a horrible secret through much of the movie. In the end, Mathilde concocts an elaborate yet thoroughly perfect and beautiful solution about how the nuns can maintain their relationships with their babies without facing shame or retribution.

THE INNOCENTS is a very emotional and draining movie for much of its running time, yet it’s a movie that all mature, media-wise viewers will want to see, whether they are Roman Catholic or not. One can hardly imagine a more difficult dilemma than the one these nuns faced. As such, the movie manages to provide a stunning example of what can happen positively even when a woman keeps a child conceived by the horror of rape.

Bringing faith and a pro-life message on screen through a historic tale also adds to the power of THE INNOCENTS. No one can accuse this movie of being a fictional propaganda story. The performances, writing, direction, and especially the cinematography are superb.

THE INNOCENTS is too heavy for children to see, but media-wise older teenagers and adults will certainly find it to be one of the most compelling films about faith they will ever experience. Though it’s a small foreign language production with a limited release, THE INNOCENTS has been playing steadily in a number of theaters. So, perhaps it will still find an audience.