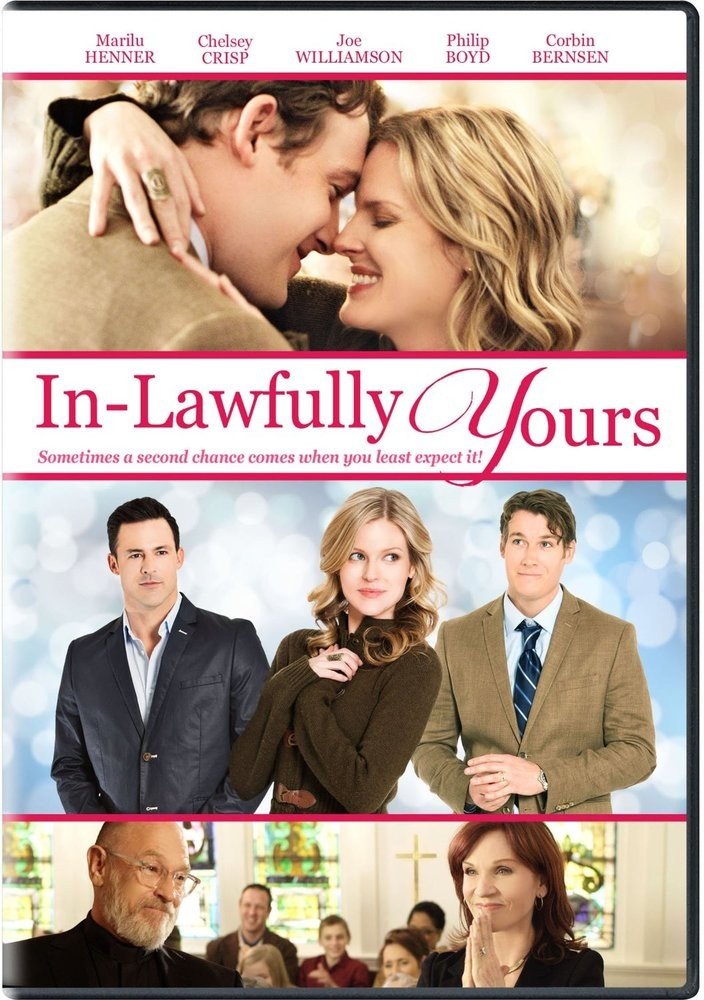 IN-LAWFULLY YOURS is a funny, emotional evangelistic movie about a woman finding faith and family. Jesse finds her husband with another woman when she goes to tell him his father’s dying. She says she’s returning to his home town to be with his family. When they arrive, Chad convinces his mother, Naomi, to leave her home and friends to come with him to New York when his father dies. Chad is actually manipulating Naomi because he’s got a real estate deal on her house. Jesse agrees to attend church when she sees how depressed Naomi is, but she disrupts the service by asking the pastor some profound questions. Will Jesse find Jesus, true love and a family, or will the wicked Chad prosper?

IN-LAWFULLY YOURS is one of the most entertaining and funniest Christian movies. The dialogue is witty throughout the movie. That said, there are moments when the jeopardy lags. However, halfway through, it takes off again, leading to an exciting, unexpected finish, with a strong Christian, evangelistic worldview. IN-LAWFULLY YOURS is a great movie for older teenagers and young adults.

(CCC, BB, L, V, S, N, M) Very Christian, evangelistic worldview about a divorced woman coming to Christ through her in-laws and her friends with explicit Christian content, but with a plot problem involving the husband committing adultery and discussions of loose living throughout the movie; one exclamatory profanity; no overt violence; woman catches husband in bed with another woman, ex-wife is accused of being a Jezebel, ex-wife makes fun of the accusation through sexual references, and the town preacher dates her, several light kissing scenes; man tries to cover up after being caught in bed with other woman; no alcohol; no smoking or drugs; and, lying, manipulation, self-righteous Christians, intimidation, and mean-spirited treatment of woman but rebuked.

IN-LAWFULLY YOURS is a funny, emotional evangelistic movie about a woman finding faith and family. The dialogue is very good. The acting is surprisingly good. Although the jeopardy sags just a little in the middle, the ending is exciting and unexpected.

In the very first scene, Jesse is searching for her husband Chad’s room in a hotel. She walks in on him, in the act of adultery. He prevaricates, but she says, “I’m here because your father is dying.” She tells him she’s returning to the small town to be with his family.

When they get to the small town, Chad’s mother, Naomi, has been convinced by Chad to leave her home and friends to live with him in New York City when his father dies. Chad is actually manipulating her because he has a real estate deal on her house.

At the funeral, Jesse, who’s always full of vim and vinegar, thinks the pastor, Ben, is an insurance salesman, so she pushes him into an open grave. After Chad leaves, Jessie stays with Naomi to help her pack.

Chad told the woman who runs the town diner, his former sweetheart, that Jessie is the one who committed adultery. This woman does everything she can to heap coals on Jesse’s emotions by putting tobacco into her coffee and other malicious acts.

At her wit’s end, and seeing how depressed Naomi is, Jesse agrees to go to church. However, she disrupts the whole church by asking very profound questions of Ben’s sermon. Ben enjoys her questions, but the elders are outraged. She starts to get interested in the Bible and Jesus, but continues to disrupt the church. Naomi gets Ben and Jesse together, but Chad returns to tell Jesse he’s not divorced, which means the pastor has been seeing a married woman. Actually, all Chad wants is to get his mother’s property.

So, the question is, will Jesse find Jesus, true love and a family, or will the wicked Chad prosper?

IN-LAWFULLY YOURS is one of the most entertaining and funny Christian movies. At the same time, the dialogue is witty throughout the movie, something that should happen with more Christian movies. The filmmakers are to be commended.

That said, because this is a romantic comedy, there are moments when the jeopardy gets forgotten, and the movie becomes slightly static and sags. However, halfway through the movie, it takes off and resumes the great pacing of the earlier part of the movie down to an exciting, unexpected finish.

There is a caution because the first scene involves a man caught in adultery. There is one exclamatory profanity and several references to immoral behavior, which are all rebuked, and some light romantic kissing.

Overall, IN-LAWFULLY YOURS is a great movie for older teenagers and young adults…in fact, for anyone who wants to have fun on the way to salvation.