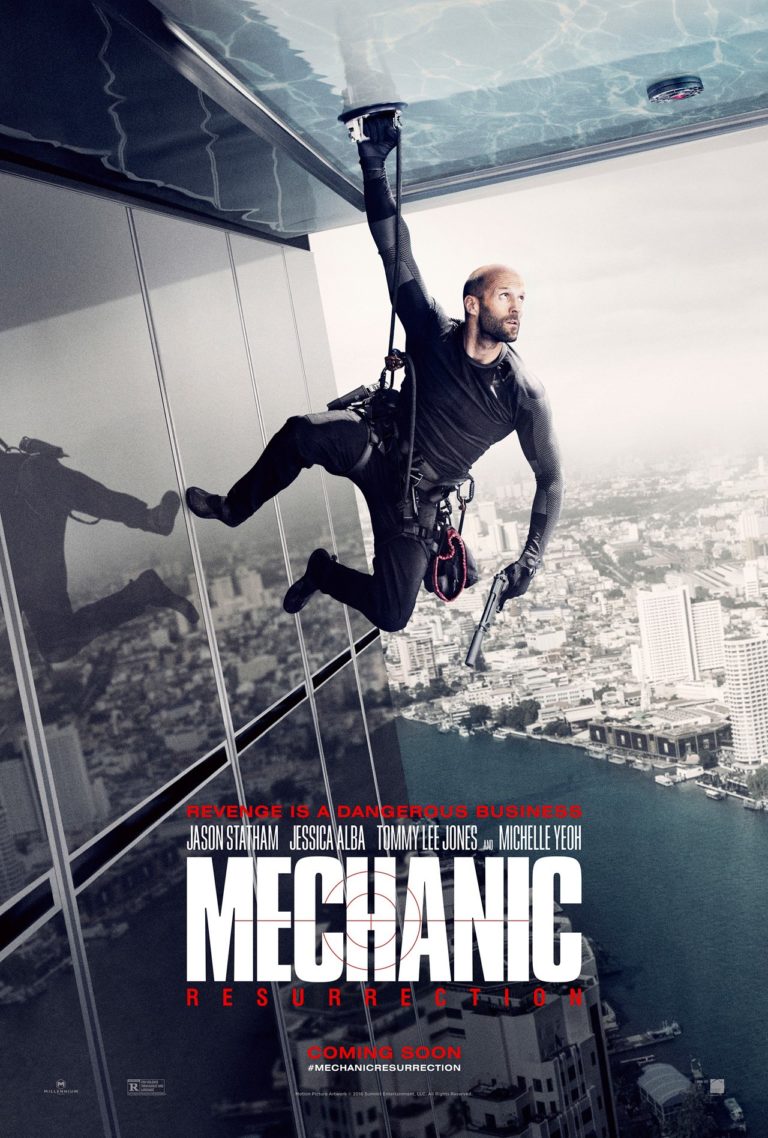 MECHANIC: RESURRECTION stars Jason Statham as Arthur Bishop, a former hitman who’s enjoying a secluded retirement in Brazil. His former childhood friend, an arms dealer named Crain, sends some goons to force Bishop to assassinate three of Crain’s rivals. However, Bishop refuses and manages a daring escape. He tries to hide out on a small tropical island run by another friend. However, Crain kidnaps Bishop’s new girlfriend, Gina, to force Bishop to kill the three rivals. Can Bishop turn the tables on Crain and save Gina and himself?

MECHANIC: RESURRECTION is a B thriller, but it’s engrossing and well made. RESURRECTION is a damsel in distress story. In this case, the damsel in distress, the protagonist’s girlfriend, runs a rescue camp in Cambodia for children victims of sex traffickers. She wants to get back to her laudable charity work, and the hero wants to help her do just that. So, the movie contains some positive moral elements. However, MECHANIC: RESURRECTION has a high body count with many intense gunfights, some strong foul language and a bedroom scene. So, extreme caution is advised.

(PaPa, B, C, FR, LL, VVV, S, N, A, D, MM) Strong mixed pagan worldview with some moral, redemptive elements, including saving a damsel in distress and some metaphorical redemptive references to death and resurrection, but there’s a high body count while saving the damsel and an immoral attitude toward premarital sex, plus one minor villain in a prison believes in some kind of pagan religion and ritual that’s not really explained; 18 obscenities and one GD; some very strong and lots of strong violence with a high body count, and some blood includes man thrown into large hot tub, and a grenade explodes under his body, other grenade explosions during gunfights, many point blank shootings during extended gunfights, machine gun rigged to shoot a lot of bad guys, man poisoned to death, and it’s made to look like an accidental mistake he made, boat explodes, a fight occurs, and one man is killed when he falls and hits his head, other fights between protagonist and villains occur, a man falls to his death and a bloody pavement is shown from a distance afterwards, woman kidnapped and hit by arms dealer to force man to assassinate three rivals, man threatens to kill children at a camp for victims of sex trafficking to force woman to seduce protagonist; implied fornication after couple shown kissing on a bed, references to saving children from the sex trade, and assassin poses as a known sexual predator in Thailand to get close to his target in prison; upper male nudity, woman in bra and bikini, some female cleavage; alcohol use; some smoking; and, blackmail, kidnapping, illegal arms dealing, evading authorities.

MECHANIC: RESURRECTION features action star Jason Statham as Bishop, a former hitman, who’s drawn back into that world when an arms dealer kidnaps Bishop’s new girlfriend to force him to assassinate the arms dealer’s three main competitors. MECHANIC: RESURRECTION is an engrossing B thriller with some positive moral elements, but it’s got a high body count, some strong foul language and mixed messages otherwise; so, extreme caution is advised.

MECHANIC: RESURRECTION opens in Rio de Janeiro, where Bishop, one of the world’s best hitmen, is hiding out and apparently retired. His former childhood friend, an arms dealer named Crain, sends some goons to force Bishop to assassinate three of Crain’s rivals and make it look like an accident. However, Bishop refuses and manages a daring escape.

Bishop hides out on a small tropical island off Thailand’s coast, run by a woman he once helped. Crain discovers the hideout somehow and forces a young woman he’s blackmailing, Gina, to pretend to be a damsel in distress and seduce Bishop into letting down his guard. Bishop doesn’t fall for the plot but learns Crain threatened to kill some Cambodian children that Gina saved from sex traffickers to make her help force Bishop to do the three hits. Bishop falls for the compassionate Gina, and she for him. They decide to play along with Crain’s plot to seduce him through Gina while he figures out a way to spirit Gina away to safety.

However, Crain’s goons kidnap Gina before Bishop can hide her, and Crain threatens to kill her if Bishop doesn’t carry out the three assassinations and make them look like accidents. Of course, Crain probably has no intention of letting Bishop or Gina live, so the question becomes, How can Bishop turn the tables on Crain and save Gina and himself?

MECHANIC: RESURRECTION is clearly a B movie meant solely for thrills. That said, it’s reasonably well made and creates a damsel-in-distress plot to add more sympathy to the hero’s violent activities. In this case, the damsel in distress, the hero’s girlfriend, runs a rescue camp in Cambodia for children victims of sex traffickers. She wants to get back to her laudable charity work, and the hero wants to help her do just that.

However, the movie has a high body count, with many pointblank shootings and bad guys being blown up by the protagonist. There’s also some strong foul language and a bedroom scene that cuts away before anything really graphic is shown (there’s brief passionate kissing on the bed, then the scene cuts away to the next morning). Also, [SPOILER FOLLOWS] Bishop ends up carrying out two of the assassinations, even though his two targets are pretty despicable characters.