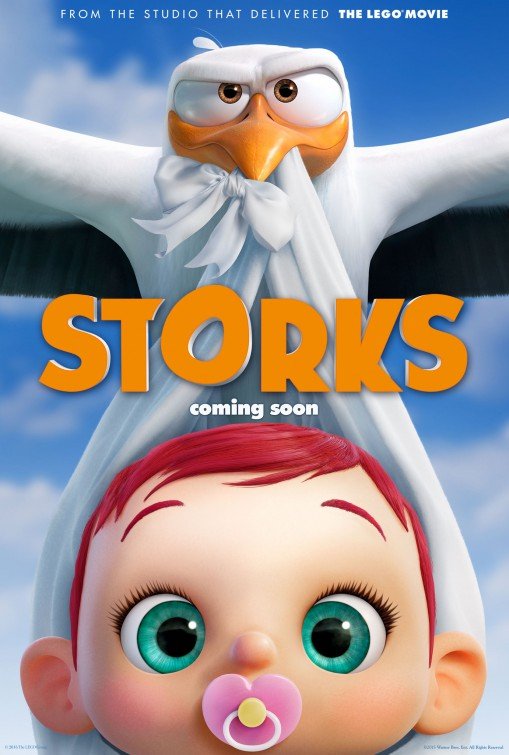 The new animated comedy, STORKS, takes the pagan legend of storks delivering babies into modern times. In the story, a stork damages a baby girl’s homing beacon to her human parents, so the storks raise her as their own and name the baby Tulip. They also shut down their baby-making machine, deciding to deliver packages instead. Tulip grows up to become a klutzy young woman. She accidentally puts a boy’s request for a baby brother through the baby machine, and a baby girl is born. Now, Tulip and her stork friend must deliver the baby to her parents without their boss knowing.

STORKS is a funny animated adventure with some heartwarming moments. God doesn’t enter the picture when it comes to the baby-making machine run by the storks, but most of the movie has strong moral, pro-life and pro-family elements. Having babies is extolled, and characters want to be involved with their mothers and fathers. Despite this, STORKS has two brief politically correct images showing storks delivering a baby to same-sex couples. MOVIEGUIDE® advises caution because of these mixed messages.

(Pa, H, BB, PC, Ho, V, N, M) Mixed pagan worldview with light pagan and humanist elements (including some pagan superstition about storks and babies taken to comical extremes for laughs and comical adventure but with no references to God) mitigated by strong moral, pro-life, pro-family elements extolling fulfilling one’s purpose, but with some politically correct homosexual content briefly showing at least two same-sex couples receiving babies from storks in a short montage clip, and two alpha male wolves want to lead a wolf pack in raising a human baby, a plot development that appears same-sex in one scene; no foul language; light slapstick comedy with falls, two storks fly into a large window, wolf pack chases stork and girl with baby, and wolves are at first scary and consider eating baby but become comical and fall in love with the baby in a parental way; no sex; images of bare-chested babies; no alcohol; no smoking or drugs; and, villain is deceitful, and wolves take baby.

The legend about storks delivering babies comes from pagan superstition and folklore. Because they mate for life and care for their young, storks were considered signs of good luck and fertility. As a result, if a stork made a nest in your chimney, it was a very good sign.

The new animated comedy, STORKS, takes this pagan legend into modern times, in a story about a talking stork and a human female, who try to deliver a new human baby to a boy and his parents, against the wishes of their boss. It’s a funny adventure with some pro-life and pro-family messages, but it also contains some politically correct references to same-sex couples.

The story opens in the present day. The storks have gone from delivering babies to delivering packages instead. That’s because years ago, a stork named Jasper, became attached to the baby girl he was delivering and broke the homing beacon which could direct him to her parents. So, the storks decided to stop delivering babies to deliver packages instead, and the girl, whom the storks named Tulip, grew up with them. However, now that Tulip’s grown up, she’s turned out to be a klutz, who ruins every delivery job on Stork Mountain.

The Boss orders his best delivery stork, Junior, to fire Tulip, but he can’t do it. Meanwhile, a little boy with inattentive parents has written to Stork Mountain asking for a baby brother. Junior and Tulip accidentally put his letter through the unused magical baby-making machine, which pops out a baby girl. Now, they have to find a way to deliver the baby to the boy and his family without their boss knowing.

STORKS has some very funny, hilarious moments. Some of the best ones come when Junior, Tulip and the baby encounter a large pack of crazy wolves. There are also some heartwarming moments, especially between the boy and his father and mother, who begin to realize what they’ve been missing when they start paying more attention to their son. Also in the movie, the search for the baby’s mother and father inspires Tulip’s search for her own mother and father.

STORKS doesn’t do much to dispel the superstitious, pagan nature of the legend about storks delivering babies. Thus, God doesn’t enter the picture when it comes to the baby-making machine run by the storks. Most of the movie, however, has strong moral, pro-life and pro-family elements. Having babies is extolled, and characters want to be involved with their mothers and fathers. Despite this, there are two brief politically correct images showing storks delivering a baby to same-sex couples, one image composed of two women, and another composed of two men.

MOVIEGUIDE® advises caution because of these mixed messages.