VOYAGE OF TIME: THE IMAX EXPERIENCE 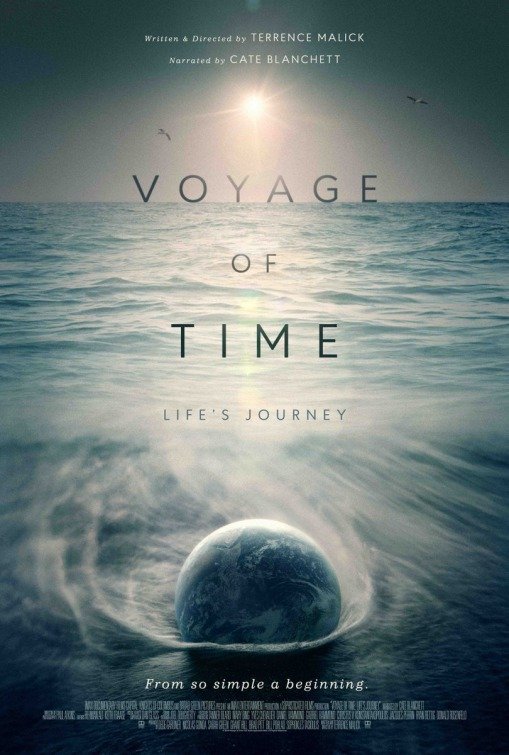 VOYAGE OF TIME: THE IMAX EXPERIENCE is a 40-minute documentary written and directed by Terrence Malick of THE TREE OF LIFE. Narrated by Brad Pitt, it chronicles the “birth and death” of the known universe, or so the movie thinks. The main issues theologically speaking are obvious. There’s no acknowledgment of God in the beginning. VOYAGE OF TIME feels uncharacteristically humanist for a Terrence Malick movie, whose masterpiece TREE OF LIFE addresses the conflict of nature and grace with a spiritual component that aligns closely with Christianity. Though it uses some spiritual language, VOYAGE OF TIME doesn’t mention God and has little actual science.

There’s undeniable beauty in Malick’s VOYAGE OF TIME: THE IMAX EXPERIENCE. Certain shots are breathtaking, and even the computer-generated renderings of cosmic wonders are truly stunning in IMAX. The movie just fails to translate into a totally compelling 40-minute journey. Rated G, it’s targeted toward families at zoos or science centers that accommodate IMAX theaters. Ultimately, the movie’s humanist worldview, mentions of evolution and some naturalistic nudity should caution parents before taking their children to see VOYAGE OF TIME.

(HH, EvEv, C, B, V, N, M) Strong humanist worldview implying the creation of the universe without an intelligent designer, with most the movie focusing on evolutionary theory, but with some redemptive, moral references to love and miracles, including some spiritual language used such as a statement that humane are “born to the light”; no foul language; a seal takes a bite out of a fish; no sexual content; naturalistic nudity with some male Neanderthals, though private areas aren’t shown; no alcohol use; no smoking or drugs; and, positive references to “multiverses.”

Written and Directed by Terrence Malick (TREE OF LIFE, THIN RED LINE), VOYAGE OF TIME: THE IMAX EXPERIENCE is a 40 minute documentary that chronicles the “birth and death” of the known universe, or so the movie thinks. IMAX is releasing a G-rated shorter version narrated by Brad Pitt, while Broad Green Pictures later will release a theatrical version running at 90 minutes narrated by Cate Blanchett.

The IMAX version begins by addressing the audience in a letter that begins with, “Dear Child” and in a way, asks the viewer to embark on a journey of introspection. It then goes to the beginning.

In the beginning, there was nothing, and out of nothing, came something. . . or at least this is what Malick falsely tries to show. A big bang, which results in bacteria, which learns to live in community, which adapts and evolves into jellyfish, which eventually evolves into creeping creatures, including dinosaurs, which are subsequently killed off by a meteor that lands on earth, but life miraculously continues on and eventually humans enter the picture. However, the movie contends that, eventually, even humanity’s time will be short, as we’ll all be consumed by the sun, and cosmic happenings will spawn infinite universes. The end.

The movie flows about as quickly as that last sentence, which thankfully bodes poorly for an argument in favor of evolutionary theory, but sadly does no justice to the true story of our beginning from a loving God.

The main issues theologically speaking are obvious. There’s no acknowledgment of God in the beginning, nor in the present, though one could argue that the movie’s silence on the matter of a deity leaves room for an Intelligent Designer. Even in the process of trying to show the evolution of the universe unfolding, there’s little to no science described. This leaves viewers having to trust Terrence Malick and the scientists who aided his research and visualization. The movie jolts through its journey of the evolutionary process so quickly, jumping from bacteria to fish to giant lizards, the movie’s whole humanist, anti-supernatural worldview sounds ludicrous. Malick is too concerned about being subtle and not on the nose, that he represents his own viewpoint poorly. To make matters worse for him, by ending the movie theorizing about the end of civilization and the birth of multiverses, also without scientific explanation, he further discredits his movie’s story.

VOYAGE OF TIME feels uncharacteristically humanist for a Terrence Malick movie, whose masterpiece THE TREE OF LIFE addresses the conflict of nature and grace with a spiritual component that aligns more closely with Christianity. In VOYAGE OF TIME, Malick can’t help himself but sometimes use spiritual language, asking how we came from dust, explaining life as a miracle, stating we are “born to the light” and are children “of the good.” Even the music heavily borrows from majestic hymns that choirs might sing in a church service. While this IMAX version has no overt reference to God, the sheer beauty and magnitude of the universe is shown in magnificent detail and speaks on its own accord that nothing in Creation happened by impersonal chance.

Malick’s interest in virtue, or lack-thereof, is also present, though with poor effect. One shot shows two whales cuddling, with Brad Pitt narrating that love stems from nature, but the very previous shot is of a seal taking a giant bite out of a beautiful sunfish. Finally, when the dark skinned Neanderthals enter the picture and show their primitive “lifestyle,” the very next and last stage of human progression shown is white children, which logically looks racist. While probably unintended by the filmmakers, there’s no doubt that Charles Darwin’s book PRESERVATION OF FAVOURED RACES IN THE STRUGGLE FOR LIFE, including its very title, has led to blatant racism. Even evolution advocate Stephen Gould has noted, “Biological arguments for racism may have been common before 1859, but they increased by orders of magnitude following the acceptance of evolutionary theory” (ONTOLOGY AND PHYLOGENY, 1977). Malick certainly isn’t racist, but a poor editing choice blatantly shows one of the many major ethical flaws in Darwin’s faulty theory.

There’s undeniable beauty in Malick’s VOYAGE OF TIME: THE IMAX EXPERIENCE. Certain shots are breathtaking, and even the computer-generated renderings of cosmic wonders in IMAX are truly stunning. It just fails to translate into a compelling 40-minute journey.

Rated G, this movie is targeted toward families at zoos or science centers that accommodate IMAX theaters. The movie’s worldview problems, references to evolution and brief naturalistic nudity should caution parents about taking their children to see VOYAGE OF TIME: THE IMAX EXPERIENCE.