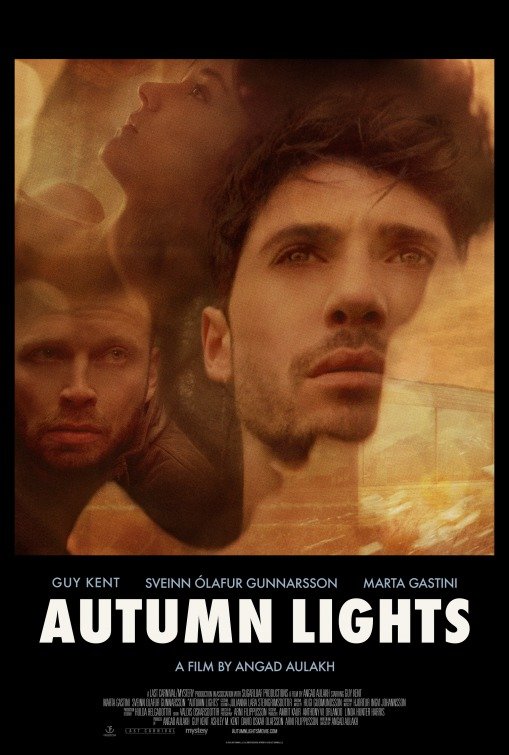 AUTUMN LIGHTS opens in a remote cabin two hours from Reykjavik in Iceland. David, an American photographer, is with his girlfriend, who decides suddenly to walk out on him. David is devastated. After discovering a crime scene, David is implicated in a local investigation and forced to stay in the area longer than expected. During this time and by pure chance, he crosses paths with Marie, a beautiful Italian woman, and her German husband, Johann. As David's fascination with the couple intensifies, he slowly finds himself entangled in their mysterious lives. When Johann goes to Austria, Maria takes up with David.

AUTUMN LIGHTS would be a good morality tale if it didn’t end on an ambiguous, ambivalent note. This movie doesn’t suffer from lack of craftsmanship. It suffers from little understanding about what makes life worthwhile. Everyone is adrift. However, whenever David makes a wise moral statement, a person admonishes him, saying, “Don’t judge.” In other words, AUTUMN LIGHTS presents a world without moral absolutes. For a world focused on pleasure, no one in AUTUMN LIGHTS seems to be having much pleasure.

(PaPaPa, B, HoHo, LL, V, SS, NN, A, D, MMM) Very strong pagan worldview with one American character who wants moral relationships and a moral worldview, but who also engages in pagan behavior, plus some lesbian references and situations; 14 obscenities and seven profanities; woman walks into ocean to commit suicide by drowning, man continues to engage in target practice and seems to threaten another man, two jealous lovers fight; several sexual scenes and moments include fully dressed fornication outside cabin and committing adultery, plus suggested but never consummated lesbian situations and hugging and kissing; lingering upper female nudity, some with extreme sexual or lesbian connotations; consistent but not excessive alcohol use; constant smoking but no drugs; and, deception, jealousy, cheating, betrayal, hints of murder in the past but only hints, and extreme selfishness and depression.

AUTUMN LIGHTS is set in a remote country cabin two hours from Reykjavik in Iceland. An American photographer named David is there with his girlfriend, who decides suddenly to walk out on him. David is devastated.

Meanwhile, a fully dressed, very attractive woman walks down to the beach and into the waves. Walking around the countryside, David discovers her drowned body. He reports it to the police, and he becomes the object of suspicion.

David’s nearest neighbor is a married couple, Johann, an Austrian, and Maria, an Italian. They claim to be in love, but Johann always seems concerned about their relationship and soon it’s clear Maria thinks nothing of a sexual tryst with friends visiting from Reykjavik. When Johann goes to Austria, Maria takes up with David, who’s just had an affair with her best friend. When Johann returns, he takes David deep into the woods, where Johann does target practice. The expectation is he’s going to shoot David, but this story is much more Bergmanesque than that. All these people have is their selfishness and depression.

In the midst of all these adulterous situations and even potential lesbian relationships, David consistently makes some moral comments, but then participates in the amoral lifestyle of Iceland. At one point, he even says, “God must be trying to tell me something,” when he sees the bloated suicide victim. He also correctly assumes Maria is the most selfish person he’s ever met. However, whenever he makes a wise moral statement, a person admonishes him and says, “Don’t judge.” In other words, AUTUMN LIGHTS depicts a world without moral absolutes. It’s also a world of affluence where no one has to labor by the sweat of his brow.

Everyone in the movie is adrift. This is known as the Scandinavian depression, and there have been many studies about it. A recent one suggested that the government providing people everything has only produced a depressed generation of amoral relativists.

Even though there are some nude scenes and sexual scenes, they seem extremely blasé and extremely uninteresting. For people who don’t like the world in which they live, where pleasure seems to revolve around adultery, none of them are experiencing much pleasure.

AUTUMN LIGHTS would be a good morality tale if it didn’t end on such an ambiguous, ambivalent note. As an Icelandic movie, it should be noted the acting is terrific, as is the filmmaking, including the music. This movie doesn’t suffer from lack of craftsman. It suffers from a lack of understanding about what makes life worthwhile.