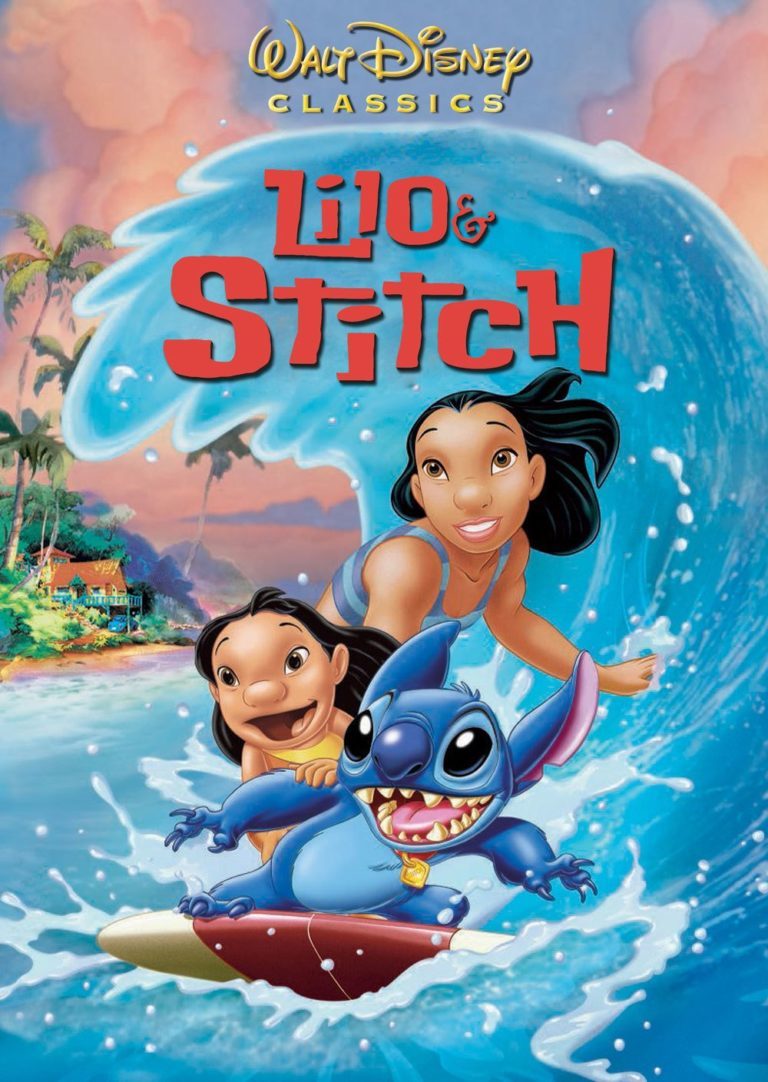 Disney’s new animated comedy, LILO & STITCH, is a delightful discovery. #626, an illegal life form created by an evil scientist in a distant galaxy, crash lands in Hawaii, stumbles from the wreckage and is promptly run over by a big truck that simultaneously strips him of his weapons, uniform, and consciousness. The next day, a lonely little girl, Lilo, and her sister, Nani go to the animal shelter to get a puppy. #626 regains consciousness and quickly realizes he is being hunted by the other galaxy bad guys and must escape. By posing as a puppy, #626 is grabbed up by Lilo, purchased, renamed “Stitch,” and taken home by the girls. Lilo believes that “Ohana,” the Hawaiian name for “family” is the most important concept of all and will not quit loving the mischievous Stitch, even though he is only interested in protecting his own hide. Hilarious antics ensue as Nani and Lilo try to teach him how to fit in on the island.

Lilo is a sad, lonely, angry, little girl (about six or eight) who spends her time shooting photographs of fat people on the beach, feeding the fish by hand and taking Hula classes. Her parents have died in a car accident and left her to be raised by her older sister, Nani, on a beautiful island in Hawaii. Though Nani tries her best, she cannot meet all of Lilo’s emotional needs as she juggles the pressures of being provider, sister and parent. This has come to the attention of Social Services, who have given her a short time to improve their situation, or possibly lose her little sister. Lilo acts out her frustration in bursts of anger, shouting and alienating the other children her age.

Meanwhile, in a galaxy far, far away, in a world of various interstellar creatures, the Galactic Federation is holding a trial for an evil scientist, Jumba, who has broken their laws by genetically creating an illegal life form called Experiment #626. This creature is designed to create havoc wherever it is unleashed. Incredibly strong, intelligent, agile, mean, fast, and bulletproof, #626 is a monster and considered a threat to all life, so they banish him to a deserted asteroid. The unhappy Jumba is sentenced to prison.

Regrettably for the Galactic Federation, #626 escapes, grabs a space ship, evades capture and does a “hyper-jump” to another solar system, crash landing on planet Earth on Lilo and Nani’s island. Flustered, the leader of the Council sends Jumba, and an “earth expert” Pleakely (Barney Fife as a one-eyed Octupus-type character) who believes humans are only important as a food source for the endangered species called “mosquitoes,” to re-capture or destroy #626.

Back on Earth, #626 crash lands, stumbles from the wreckage and is promptly run over by a big truck that simultaneously strips him of his weapons, uniform and consciousness. The next day Lilo and Nani go to the animal shelter to get a puppy for Lilo as a way of combating her loneliness. #626 regains consciousness in the shelter and quickly realizes he is being hunted by Jumba and Pleakely and must escape somehow. By posing as a puppy, #626 is grabbed up by Lilo, purchased, renamed “Stitch,” and taken home by the girls. (Note of warning: Bringing home an alien designed for chaos and destruction is a bad idea.)

Lilo believes that “Ohana,” the Hawaiian name for “family,” is the most important concept of all and will not quit loving the mischievous Stitch, even though he is only interested in protecting his own hide. Hilarious antics ensue as Nani and Lilo try to teach him to surf and act like a mini-Elvis, as all the while he avoids his captors and Nani tries to stave off losing Lilo to government bureaucrats.

Eventually, Lilo’s love, faith and devotion change the heart of this lost creature, allowing him to feel love, want to be part of a family and cherish Lilo and Nani. Like many Disney movies before, the movie wraps up with everyone loved, accepted and happy.

Christian audiences should note the evolutionary notion when Pleakley tells the Councilwoman that humans are weak and have to “re-evolve” every time the planet is hit with an asteroid. (Pleakley shows her a cartoon illustration of people evolving from slime.) Also, little Lilo tells David (Nani’s ex-boyfriend) that Nani told her he has a “nice butt” and great hair. Obviously, this is inappropriate and not necessary for the movie. I am sure the producers would say it is an outgrowth of her broken family, but I disagree.

Because the other children in the town do not accept Lilo, and she feels alienated, there is a scene where she lays down a book on “Practical Voodoo” and drops likenesses of the other children into a jar of pickle juice, and shakes it. In defense of the scene, it is in context of the Social Worker walking through the house with Nani as she tries to convince him that everything is OK, and that Lilo is perfectly adjusted. It is a very funny scene, but slightly disturbing nonetheless.

In one very important scene Lilo is praying that God would restore her family and bring her a friend that would not leave. In this case, Stitch is God’s answer to her prayer.

Wonderful animation and storytelling, as well as a fun soundtrack that features Elvis Presley music, makes LILO & STITCH a very exciting and moving movie experience. LILO & STITCH is very enjoyable for adults and children, but adults should be prepared to counter the few objectionable points and use them as teaching opportunities. Finally, it is interesting that Disney and other animators are finally drawing cartoon people with believable, imperfect bodies.