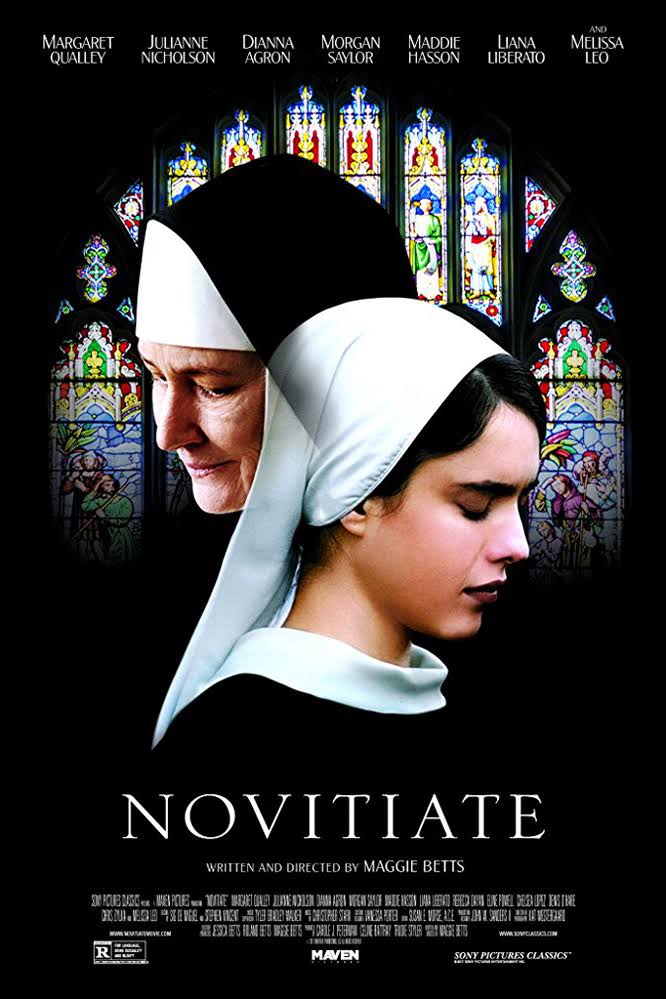 NOVITIATE takes place in a small Tennessee town, which houses a Catholic church and school. Cathleen, a shy, young girl whose home is falling apart, is desperate to find some solace from the shouting matches of her parents. Her mother, Nora, takes her to church one Sunday, and that serves as the catalyst for Cathleen enrolling in Catholic school, and then making the decision to devote her life to God as a nun. Once a postulant in the local convent, Cathleen discovers her loneliness is exacerbated by the Mother Superior’s strict discipline. Meanwhile, the entire Catholic Church is rocked by the 1962 Vatican II reforms.

Writer/Director Maggie Betts does a remarkable job painting the conflict within the 1962 church and the lives of the nuns. She doesn’t choose sides between the traditional Catholic devotion to the faith and the liberal reforms that followed. Instead, she shows the merits of both. NOVITIATE does dwell on the sexual frustrations of young women denied any sort of physical contact with others. This and some foul language and emotional abuse by the Mother Superior make it excessive.

(CC, PaPa, H, FR, Ab, HoHo, LL, V, SS, NN, D, MM) Somewhat mixed but primarily Christian worldview in a story that takes place primarily in a Catholic convent with nuns and postulates practicing their faith in 1964, a couple scenes depict church services, the main character attends a Catholic school, but her mother is agnostic and doesn’t necessarily believe in God or the Bible, movie contains many religious rituals not included in the Bible (e.g., the convent depicted in the movie enforces lifestyle rules that are not taught in the Bible, such as self-flagellation), plus one scene depicts a lesbian love scene between two postulates and other scenes imply lesbian relationships between convent postulates; about 10 obscenities and three profanities; two scenes depict self-flagellation; two scenes depict girls abusing themselves at night when they’re alone, one scene shows two girls kissing and implies homosexual sex, one scene shows two girls being kicked out of the convent for having sexual relations with one another; partial full nudity when a fully nude nun walks into a convent’s dining hall; no alcohol use; several scenes show cigarette smoking; and, the main character’s parents have a huge fight in front of her and they eventually divorce, plus the punishments at the convent are borderline emotionally and verbally abusive.

NOVITIATE takes place in a small Tennessee town from 1954 to 1964, which houses a prominent Catholic church and school.

Cathleen, a shy, young girl whose home life is falling apart, is desperate to find some solace from the shouting matches of her parents. Furthermore, she feels very alone in the world, unable to make any sort of meaningful human connection. Her mother, Nora, takes her to church one Sunday, believing that Cathleen should choose her own religious destiny. Nora is agnostic in her reasoning and even openly hostile to the persuasive attempts of the Catholic church to win her over, but remains open-minded when she later finds out that Cathleen found the church experience to be a ‘peaceful” reprieve from the hostile world.

Nuns from the local convent approach Nora one day about enrolling Cathleen in the Catholic school. Though her mother isn’t thrilled at the prospect, Cathleen is excited about the opportunity to explore religion in more depth. As graduation draws near, Cathleen reveals she’s made the life-altering decision to devote her life to God at the convent.

Nora is heart-broken at the prospect of her daughter withdrawing from the world and choosing to hide in a convent. Not only will they be separated, but any chance of marriage and children is out the window. Nonetheless, Nora ultimately decides to support her daughter and faithfully attends the family ceremonies at the convent, where postulants rise through the ranks of the nunnery.

Inside the convent’s walls, things are less rosy than they appear from the outside. The Mother Superior is under intense pressure from the Vatican to implement radical changes to the traditional Catholic rituals of convent life, due to the 1962 church reforms. As she fights against these changes, some of the postulants themselves begin to doubt their decisions because of loneliness. Many of the daily rituals seem to go against the very human nature that God ingrained in each person, such as the needs for intimate companionship. This leads to sexual misconduct and unrealistic expectations going unmet. Cathleen finds herself in the midst of intense doubt, as does the entire convent. about the future of the Catholic faith.

Writer/Director Maggie Betts, has personal experience growing up in the Catholic system. She does a remarkable job painting the conflicts within the 1964 church and within the personal lives of those in the priesthood/nunnery. The movie doesn’t choose sides between the fundamentalist devotion to the faith and the liberal reforms that followed. Instead it beautifully shows the merits of both, and never presents itself as either pro or anti-Catholic. In a movie that could easily vilify Christianity in whatever form, it chooses to let the viewers decide how they feel about the story. The cast and crew spent time living in the actual nunnery, which brings some genuineness to the story, but nothing stands out as particularly remarkable. Other than the intriguing, emotional acting of Margaret Qualley as Cathleen and Melissa Leo as the Mother Superior, NOVITIATE is an average outing.

Although NOVITIATE stays fairly neutral in its analysis of the Catholic church, it does portray some of its shortcomings when it comes to convent life. It chooses to dwell on the sexual frustrations of young women who are denied any sort of intimate contact with others – not even a friendly touch or hug is allowed. This leads to several scenes of implied lesbian sex or depicted self-abuse. The movie also points to the unrealistic discipline expected of the postulates, and their punishments by Mother Superior border on being abusive, if not physically then certainly emotionally.

Though NOVITIATE doesn’t disparage Christianity and is open-minded to it, the movie does serve as a critique of the dangers that extra-biblical religious rituals can bring to the faith. NOVITIATE offers an unveiled, and sometimes shocking, view of strict Catholic devotion, but includes some foul language, sexual immorality and arguably abusive behavior.