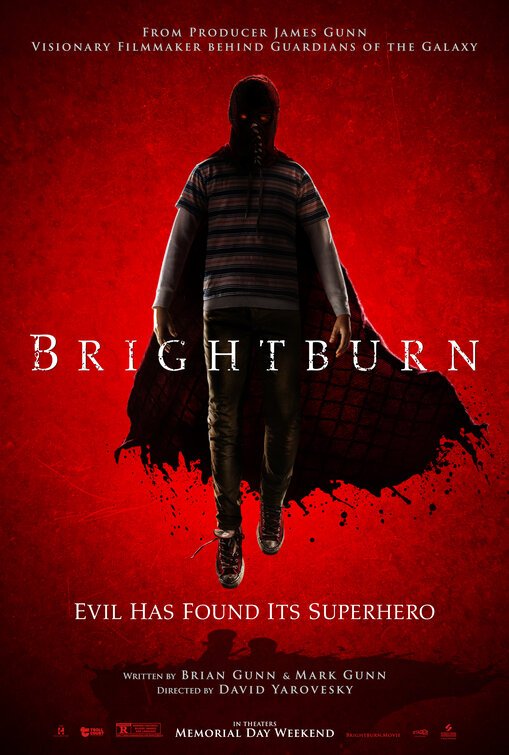 BRIGHTBURN is a creepy, intense science fiction thriller about an alien child who turns out to be a monster with super powers. A married couple living on a Kansas farmhouse find an alien baby in a crashed spaceship. They raise the child as their own and name him Brandon. However, when he turns 12, the cute little child they’ve raised becomes creepy, sullen and angry. He starts lashing out at people who offend him. Will Brandon’s parents, especially his loving mother, find out the evil that lurks in his heart?

BRIGHTBURN is part science fiction movie and part horror movie. It’s a very intense, well-acted movie, but it has lots of strong foul language and some gruesome violence. For instance, in one scene, an attacked woman pulls a piece of glass out of her eye. Worse, at the end of the movie, evil prevails. Also, Brandon’s parents have to make a decision whether to kill their son, who seems to be beyond redemption. None of this makes BRIGHTBURN the kind of movie that provides a positive, inspiring time at the movies.

(PaPaPa, B, LLL, VVV, S, AA, MM):
Dominant Worldview and Other Worldview Content/Elements:
Strong demonic pagan worldview where evil prevails, though somewhat mitigated perhaps because movie sides with those trying to defeat the evil villain, even though a couple of their attempts are ill considered and are last resort type of things
Foul Language:
41 obscenities (some “f” words), six strong profanities, seven light profanities
Violence:
Some extreme violence combined with strong violence (all of it intense) includes woman pulls glass shard out of her left eyeball, man’s jaw is completely loose from his face because of brutal accident, villain melts victim’s face with his heat vision, image of corpse shown, villain hurls objects at buildings, villain breaks a large steal door in two pieces, boy villain gets a cut hand, boy villain twists girl’s hand until it breaks, villain lifts truck up by telekinesis and then slams it hood first into road, villain menaces people, villain hurls woman’s body, villain drops woman’s body from a great height, man tries to shoot villain with super powers in head, but it does nothing, people startled by other people, villain with super powers slams sheriff against a pillar and leaves a bloody smear, etc.
Sex:
Married couple about to have relations in bed are interrupted, brief talk about doing that in another scene, and father tries to talk with adopted son about liking girls and getting aroused
Nudity:
Upper male nudity and some glamor photos of buxom women in fancy underwear
Alcohol Use:
Some alcohol use, and man appears to be a bit drunk or tipsy one time
Smoking and/or Drug Use and Abuse:
No smoking or drugs; and,
Miscellaneous Immorality:
Lying, uncontrolled anger leads to murder, villain has no remorse.

What if Superman, instead of being a force for good, was really a force for evil? That’s the question at the heart of the new science fiction thriller BRIGHTBURN.

The movie opens with a scene between Kyle Breyer and his wife, Tori, who are trying to have a baby. Their bookshelves are lined with books about fertility.

Suddenly, a loud noise scares them. They look out the window of their farmhouse and see a strange red glow coming from the woods nearby.

10 years later, Brandon is playing hide and seek with his mother. However, this time he’s hiding out in the barn, a place he’s been warned not to go because of the nails and equipment there that might harm him.

One night, a red glow comes from the barn, and Brandon seems to be hearing a strange alien language emanating from the glow and penetrating his dreams. Brandon gets out of bed, and Tori eventually finds Brandon pounding on a locked trapdoor in the garage.

Brandon starts behaving more oddly. At his birthday party at the local diner, Kyle’s brother-in-law tries to give Brandon a rifle, but Kyle says no. Brandon demands that Kyle let him have the rifle anyway, and Kyle decides to take the family home. The next day or so, Kyle and Tori find photos of maggots and insect larvae hidden under his bed next to photos of women in sexy lingerie.

Kyle decides to take the family camping and have a man-to-man talk with Brandon while Kyle takes Brandon hunting with him. Kyle tells Brandon it’s natural for Brandon to have feelings and even cravings for girls, but Kyle doesn’t make a distinction between feelings versus lust. That night, Brandon secretly visits the bedroom of a schoolgirl he likes, but disappears when the girl thinks she sees him lurking near her window and calls her mother.

Later at school, the girl is no longer friendly with Brandon. She thinks he’s a bit creepy now. So, when the gym teacher engages the students in a trust experiment on the track field, the girl lets Brandon fall. The teacher orders the girl to help Brandon up, but she refuses at first, claiming that Brandon’s too creepy. The teacher admonishes the girl again, but when she grabs Brandon’s hand, he viciously twists her hand until it breaks.

In the principal’s office with Brandon’s parents and the local sheriff, the girl’s mother angrily tells everyone that Brandon’s a menace and should be locked up instead of suspended for two days. The sheriff disagrees, and the school orders Brandon to talk with the school’s counseling official, who just happens to be Brandon’s aunt, his mother’s married sister.

Eventually, the girl’s mother disappears after Brandon, who can levitate and seems to have super strength and speed, attacks her while she’s alone cleaning up the diner after it closed. Then, Brandon secretly visits his aunt, the school counselor, one night after she notices that Brandon’s showing no remorse for breaking the girl’s hand. She had informed Brandon she has to give a report on him to the sheriff, but he tries to convince her not to say anything bad. Brandon pretends to leave, but when his uncle arrives home in his truck, Brandon starts menacing him. The uncle takes off in his truck, but Brandon viciously murders his uncle and makes it look like an accident.

The next morning, Brandon isn’t at all sad when his parents inform him his uncle has died. Will Brandon’s parents, especially his loving mother, find out the evil that lurks in his heart? Will they discover that the benevolent alien son they thought they adopted is really an alien monster from outer space?

BRIGHTBURN is part science fiction movie and part horror movie. It’s a very intense, well-acted movie, but it has a lot of strong foul language and some gruesome violence. For instance, in one scene, the girl’s mother pulls a piece of glass out of her eye. Worse, at the end of the movie, evil prevails. Also, Brandon’s parents have to make a decision whether to kill their son, who seems to be beyond redemption. Needless to say, none of this makes BRIGHTBURN the kind of movie that provides a positive, much less inspiring, time at the movies. The fun of a really good horror movie or monster movie is when the heroes are able to defeat or banish the monster in the final reel.